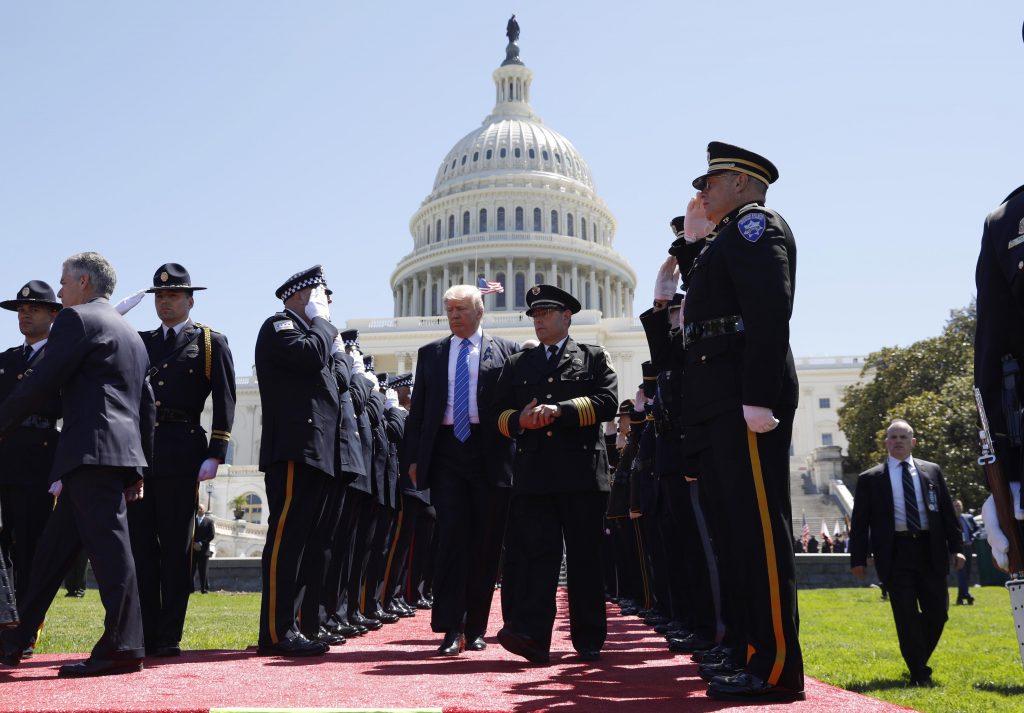 President Donald Trump on Monday accused fellow politicians of failing to support police and declared that officers on the beat are subject to “unfair defamation and vilification” that have made their jobs more dangerous.

Mr. Trump said in a speech at an annual memorial service for officers slain in the line of duty that his administration would make it a priority to provide more federal resources for local law enforcement departments.

“You are the thin blue line between civilization and chaos,” Mr. Trump said. “Because you don’t hear it nearly enough, I want you to know that patriotic Americans of all backgrounds truly support and love our police. The very sad thing is that today many politicians don’t want to say that, they don’t want to talk about that, because it’s not politically correct, and they think it might hurt them with voters. I will say it, and I will talk about it proudly.”

In a proclamation he signed in the Oval Office, Mr. Trump announced the White House would be lit up in blue lights Monday evening to honor the 394 officers who were killed in action last year.

Though he did not mention it by name, Mr. Trump’s remarks appeared to allude obliquely to Black Lives Matter and other civil rights movements that arose out of high-profile shootings by police of African American men in cities across the country in recent years, including the 2014 killing of teenager Michael Brown in Ferguson, Mo., which set off protests and clashes between residents and police.

Mr. Trump’s predecessor, President Barack Obama, had struggled to balance his rhetorical support for the police against empathy for the protesters. But Mr. Trump has more vocally offered backing to the police.

“We must end the reckless words of incitement that give rise to danger and violence, and take the time to work with cops, not against them, not obstruct them – which is what we’re doing,” Pres. Trump said.

Mr. Trump alluded to violence in cities, such as Baltimore and Chicago, saying that poorer, more disadvantaged residents often suffer the most. “We cannot stand for such violence; we cannot tolerate such pain,” he said. “My administration is totally determined to restore law and order and justice for all Americans, and we’re going to do it quickly.”