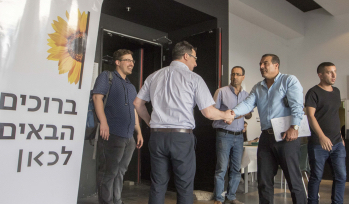 After months of delays, recriminations, lawsuits and a near-coalition crisis, the Israel Public Broadcasting Corporation began its broadcasts on Monday morning. First on the air was the current events channel, the reincarnation of the former Reshet Bet of the now defunct Israel Broadcasting Authority. In the coming weeks and months, other stations – including pop music, stations for the religious and chareidi public, and stations for speakers of Russian, Arabic and Amharric will take to the airwaves.

While the news broadcasts on Monday were handled by the new entity, called Kan, the corporation is not supposed to be broadcasting news; that, according to a Knesset decision last week, is the job of a separate organization. That organization is supposed to begin its work Monday evening, taking over the work of Channel One, but a court order may prevent that from happening. Members of Kan filed a petition with the High Court to prevent the new news organization from taking over news broadcasts. If the court issues an injunction, Kan itself may broadcast the news – or it is possible that no news at all will be broadcast until the legal issues are sorted out.

According to Kan’s petition, the divorce of news from other content, as prescribed in the Knesset law passed last week, is an artificial division. The original charter of Kan included broadcasting the news. The separation was the result of a deal between Finance Minister Moshe Kahlon and Prime Minister Binyamin Netanyahu, who complained that the people running Kan were too leftist to put on an objective newscast.

Netanyahu at one point withdrew support from Kan altogether, saying that he wanted to revamp the Israel Broadcasting Authority – with Kahlon threatening to resign as Finance Minister and take his Kulanu party’s 10 MKs out of the government. The independent news broadcasting body was the compromise that restored coalition peace. The High Court is expected to render its opinion on the mess at around 5 p.m. Monday – moments before the first news broadcasts on Channel One are set to begin.