Business Crooks Are Stealing the Grease From Your French Fries
Business 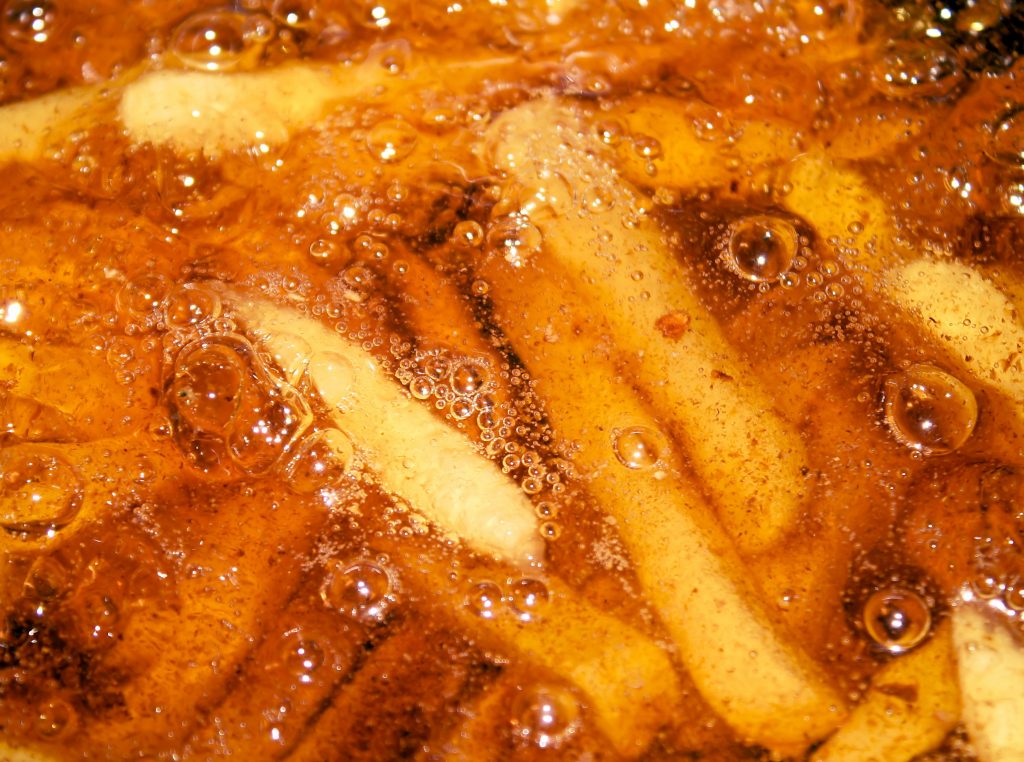 The prize for the caper was more than a ton of used restaurant grease. Two men busted by police near a strip-mall dumpster in Knoxville, Tennessee, were seen March 2 siphoning the gooey waste into barrels on their truck. In the weeks before then, 44 similar thefts had been reported.

Stealing old vegetable oil that’s been used to cook chicken nuggets and french fries sounds a little gross. But a black market for the golden gunk is growing as U.S. refiners process record amounts of grease to comply with government mandates for renewable fuels. Last year, 1.4 billion pounds (635,000 metric tons) were turned into biodiesel — or 3.84 million pounds a day.

Most restaurants hire waste handlers to get rid of oil after a few days of use. But the National Renderers Association, an industry group, says as much as $75 million is illegally siphoned every year, much of it ending up in refineries. Biofuel prices have been shooting up, boosting the incentive for thieves who are getting bolder and craftier. With the arrival of warmer spring weather, licensed collectors are bracing for even more heists.

Finding value in old grease isn’t new. For more than a century, the waste product has been processed into ingredients for everything from makeup and paint to pet food and livestock feed, according to the Arlington, Virginia-based National Renderers Association, which represents 51 companies with 205 plants in the U.S. and Canada.

What’s different is more cooking oil is being made into fuel. It’s now the largest use for old grease, at around 30 percent of demand. A 2007 energy law calls for American cars, trucks and buses to use escalating amounts of biofuels. Most of that is corn-based ethanol used in gasoline, but refiners also are making more biodiesel. Soybean oil is the primary raw material, followed by used grease and corn oil.

All that demand growth has impacted prices. The benchmark for yellow grease this week was around 25 cents a pound, which is more than triple what it was in April 2000, U.S. Department of Agriculture data show. The commodity got as high as 47.75 cents in 2011, when crude oil was over $100 a barrel and the pump price of gasoline was almost $4 a gallon.

The rally in biodiesel is boosting the value of grease. Since Feb. 17, the fuel is up 12 percent to $3 a gallon, as of April 28. Further gains may be likely because of a trade dispute with competitors in Argentina and Indonesia, which may limit imports of biodiesel, Craig Irwin, an analyst at Roth Capital Partners in Newport Beach, California, wrote in an April 17 report.

That’s increasing the incentive for thieves from California to New York who already were able to make good money selling filched oil.

Still, old grease poses a disposal headache for restaurants, so they sign contracts with licensed collectors, who get exclusive rights to the oil if they agree to pay a small percentage of what they sell to refiners. It’s usually stored in locked dumpsters on restaurant property.

While few police departments track thefts of grease, handlers say the crimes are on the rise.

The Knoxville case was one example. At about 5:26 a.m. on March 2, two men were observed near a Wingstop Inc. restaurant using hoses to drain grease tanks. They were filling big drums in the back of an unmarked white truck, which didn’t look like the collection contractor’s vehicle, according to police reports.

The two men were arrested with what police said was 2,200 pounds of used grease valued at about $600. Both listed their residences in North Carolina, about 300 miles away. One of the accused was deported to Mexico last month, and the other was released on bond, government records show. Neither man could be reached by Bloomberg for comment.

“Anytime diesel goes up, grease goes up,” and then “the thieves come along,” said Bob Hart, a driver for DAR-PRO Solutions in Knoxville who has been a licensed collector for more than two decades. The Wingstop was one of his customers. Before the arrests, Hart said there had been 44 loads stolen in the previous few weeks.

At restaurants serviced by Buffalo Biodiesel in eastern New York, Ohio and Pennsylvania, grease thefts have increased. Over the past six months, Majumdar says he had to replace about 1,000 locks on customer tanks. Because the thefts come out of his pocket, Majumdar hired a private investigator two months ago to help track down bad guys. The business probably loses 20 percent of its income to illegal siphoners, and Majumdar says he’s posted a $5,000 reward for the arrest and successful conviction of culprits.

In the summer of 2015, the Plymouth Minnesota Police Department started surveillance at some local restaurants and tracked some people who were using an old white box truck that had a “Fruit Co.” sign on the side as they collected grease illicitly all over the Minneapolis area, Plymouth Police Sergeant Heath Bird said. No one was prosecuted. Authorities couldn’t justify the time and resources to pursue a case involving stolen trash, Bird said.

“At the end of the day, no one cares about used grease,” Buffalo Biodiesel’s Majumdar said, adding that some thefts may be licensed collectors taking from their competitors.

Brandon Foley, vice president of procurement at Sanimax, a grease collector in the Midwest and Canada, says he’s expecting an increase in thefts as the weather warms up. He’s currently on the lookout for grease grabbers traveling around in an old Pepsi truck in the middle of the night.

“This grease industry is the wild, wild west,” said Mike Kostelac, president of Millstadt, Illinois-based Ace Grease Service, which collects from restaurants in 12 states. His company’s website has a video of someone stealing their grease.