I Almost Killed My Mom With an Anti-Itch Pill 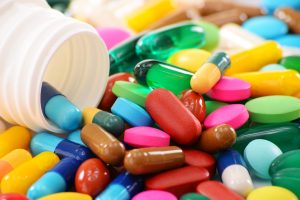 Nobody wants to kill her own mother by accident. Luckily, mine pulled through.

As teachable moments go, this one was huge. I learned that once you or someone you know hits age 65, it’s time to learn which drugs can increase the risk of dementia when taken for long periods. And which, for people who already have dementia, can make them psychotic.

I call them the drugs of fog, and I saw firsthand what these seemingly innocuous pills did to my mom. A pill that might make a 20-year-old or a 40-year-old slightly sleepy made my 95-year-old mother, Ceil Zubrod, into someone I had never seen. Known for her easy smile, great style and a crazy-early bedtime, she morphed in less than five hours into a hallucinating, night-walking, screaming basket case, all thanks to one anti-itch prescription pill I gave her for her eczema.

Ignorance is never a great defense, but it’s the only one I have. The nightmare began after I gave her that pill at around 9 p.m. as she went to bed. At roughly 2 a.m., she whacked me awake with her flashlight and ordered me to help her pack a suitcase so we could walk to her childhood home in New York, about 1,000 miles from our place in Tampa.

I threw on a raincoat and began looking for my car keys to drive to the emergency room. In that minute, she tried to climb over our balcony. Fortunately I happened to look up and pried her hands off the railing. Her face was so tormented I barely recognized her. At the ER, they took blood, did an MRI and – of course, given her age – ordered up a urine test.

When the result came back, the ER doc demanded, “You gave you mother a Benadryl – at her age?” As the exhausted caregiver who’d ingested my share of Benadryl over six decades for occasional allergies, I was clueless because this was not what my mom was taking. The doctor who had prescribed her anti-itch pill never mentioned that it was the equivalent of a giant Benadryl.

And if he had, I wouldn’t have understood why that was so terrible.

One of the many secret aspects of aging is that physical symptoms can mutate like aliens, which plays havoc with all we think we know about healing ourselves or our loved ones. For example, once we hit our 70s or 80s, symptoms of urinary tract infection give way to something known throughout Florida – the state with the nation’s highest percentage of the elderly – as “acting strange.”

During this entire episode I naively assumed my mother might have a really bad urinary tract infection, but Ceil’s mercifully well-informed ER doctor understood the possible terrifying side effects of pills that adult children give their aged parents. Which is probably why he acted as if I’d fed my mother rat poison.

“Do not give her ANY more anticholinergics,” he practically snarled while signing her discharge papers.

I made him spell it while praying he wouldn’t cite me for elder abuse. Once Ceil was asleep in her own bed at our home, I researched what other medications came under that heading.

A Harvard medical health blog told me: “Anticholinergic drugs block the action of acetylcholine. This substance transmits messages in the nervous system. In the brain, acetylcholine is involved in learning and memory. In the rest of the body, it stimulates muscle contractions. Anticholinergic drugs include some antihistamines, tricyclic antidepressants, medications to control overactive bladder, and drugs to relieve the symptoms of Parkinson’s disease.” And then it pointed to “mounting evidence that anticholinergics aren’t drugs to take long-term if you want to keep a clear head, and keep your head clear into old age.”

I moved on to actual studies. What was news to me had already been well studied around the world. In England, a 2011 study of 13,400 people age 65 and older found that the use of medication containing anticholinergics was linked to an increase in the risk of cognitive impairment – and mortality within two years.

Similarly, researchers in the United States followed 3,434 people 65 and older for more than seven years. None had dementia or Alzheimer’s disease when the study began, and all drugs they took were carefully tracked. The findings of this study were as scary to me as the outcome of the overseas research: Those who took anticholinergic drugs – either over-the-counter or prescription-strength formulations – for an extended period had a greater risk of developing dementia.

Anticholinergics include all kinds of mass-market remedies beyond Benadryl (which is known generically as diphenhydramine), such as Nyquil, Sominex, Advil/Tylenol PM,) and tolterodine (Detrol), and neck and back pain drugs such as Flexeril. These are all worthwhile medications – for younger people.

Ceil is now down to a single baby aspirin each day. She happily watches her favorite on-demand sports programs – tennis and ice skating – before she goes to sleep. She takes a daily one-mile walk, loves going to a nearby Trader Joe’s for flowers and regularly gets a manicure.

So I had been feeling home free after our ER visit until I saw amitriptyline recently on a list of anticholinergics. It had been prescribed as sleeping pill for me, and I had been taking it nightly, and happily, for almost two years. No more.

Back in my days, “you are what you eat” was a mega mantra. These days, I’m more inclined to say, “The older you get, the more you need to keep up with anticholinergic research.”