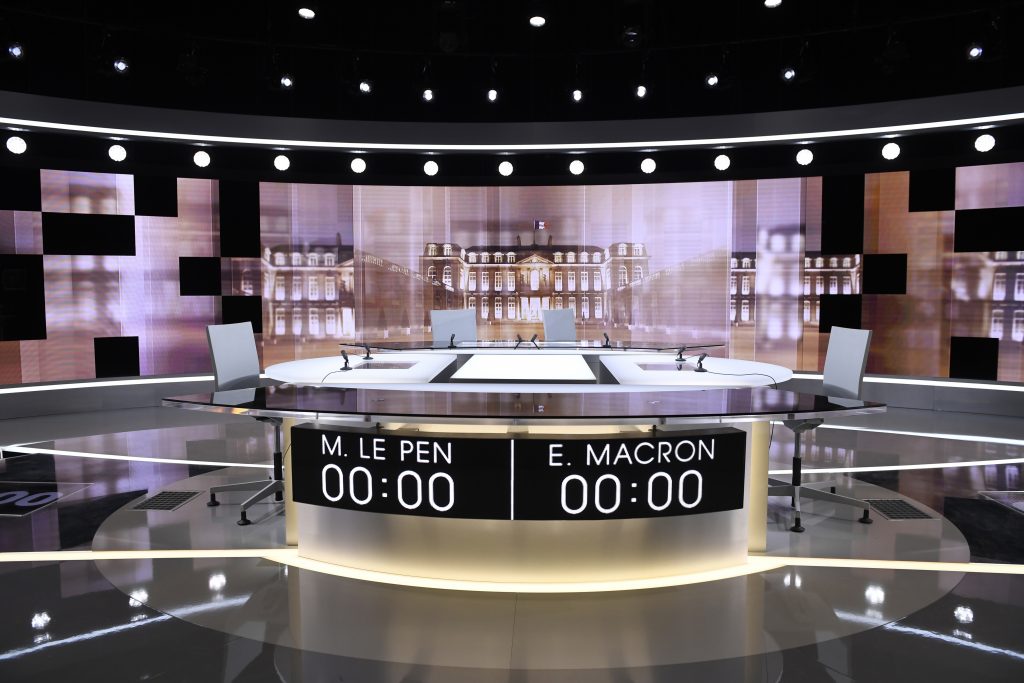 Macron’s party said it was taking legal action after an internet campaign suggested shortly before a debate between the two candidates on Wednesday night that Macron had concealed funds in a foreign tax haven. Macron himself denied the allegation.

Campaigning on an anti-EU, anti-globalization platform, Le Pen has sought to portray the former investment banker and economy minister as an out-of-touch member of an elite responsible for France’s ills: unemployment of around 10 percent, low growth, and a two-year spate of Islamist violence.

According to a snap opinion poll by Elabe for BFMTV, 63 percent of viewers found Macron the more convincing in Wednesday’s debate, reinforcing his status as favorite to win the Elysee.

An Ifop-Fiducial poll released on Wednesday put Macron 20 percentage points ahead of Le Pen in voting intentions, in line with other recent surveys.

Official campaigning is required by law to end at midnight on Friday before voters go to the polls on Sunday for the runoff between the candidates who topped the first round two weeks ago.

French two-year bond yields fell 3 basis points to a two-month low on Thursday, pointing to further relief on financial markets that Le Pen had not gained ground with her pledges to quit the euro currency, hold a referendum on leaving the European Union, and print money to finance higher state spending.

Macron has promised to stimulate growth with training programs and a relaxation of labor laws, while reducing state expenditure.

At the end of Wednesday’s heated debate, watched by 15 million people, Le Pen insinuated that her rival might hold an offshore account.

“I’ve never had an account in any tax haven,” Macron told France Inter radio on Thursday. “Le Pen is behind this. She has an internet army mobilizing.”

He said she had allies spreading “false information and lies” who were “in certain cases linked to Russian interests.”

Pressed about her remark during the debate, Le Pen told BFM on Thursday that she had no proof Macron had an offshore account, but did not want undisclosed funds to come to light when it was too late.

Macron’s campaign team said that, two hours before the debate started, an anonymous account posted documents on an internet forum purporting to prove that Macron had an offshore account, and the information was quickly distributed on social media.

“Emmanuel Macron is the target of a carefully orchestrated attempt to destabilize him 48 hours before the end of the campaign,” his spokesman Sylvain Fort said in a statement.

“It’s worth noting that this operation was taken up by Le Pen in a curious manner during the debate … Obviously all of the necessary legal action will be taken and is already underway.” Fort did not indicate if this action was aimed at a specific individual or group.

Macron’s team released a screenshot of what it said was a falsified signature on documents purportedly proving “Macron’s secret tax evasion” as well as a trail of social media posts spreading the information.

Macron’s team say his party (“En Marche!” or “Onwards!”) has been the target of a series of attempts to steal email credentials since January.

Feike Hacquebord, a researcher with security firm Trend Micro, said last week that he had found evidence that it had been targeted by a cyber-espionage group linked by some experts to the Russian military intelligence agency GRU.

Russia has denied involvement in attacks on Macron’s campaign.