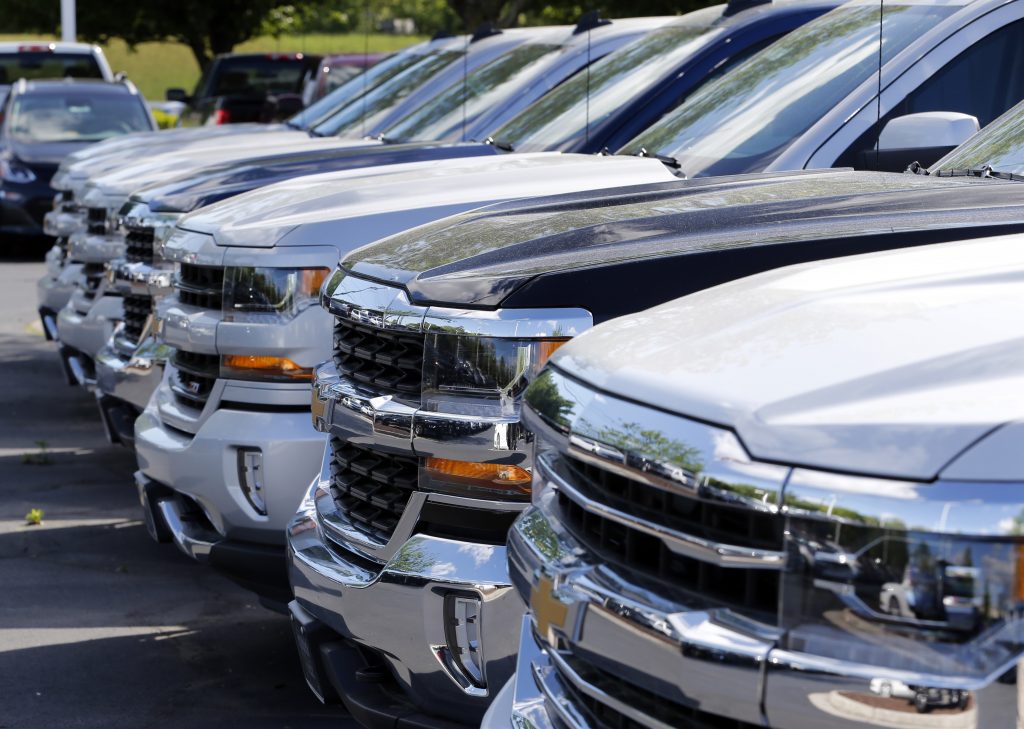 The six top-selling automakers in the U.S. reported sales declines last month as auto demand seems to be slowing after seven straight years of growth.

Industry analysts expected April auto sales to be down anywhere from 2 percent to 4 percent, but still run at a healthy annual rate of around 17.1 million vehicles.

Kelley Blue Book says it looks like 2017 U.S. auto sales will fall short of last year’s record 17.5 million for the first annual sales drop since 2009. It expects full-year sales of 16.8 million to 17.3 million.

Ford, which reported a 7.2 percent decline due largely to car demand that tumbled 21 percent, said that it’s still getting healthy prices for its vehicles as people load on more options. Vice President of Sales and Marketing Mark LaNeve told analysts and reporters that April’s decline is nothing to panic about.

“We have to let the year play out,” he said. “In a plateauing industry you’re going to have some months that are up and some that are down,” he said. Economic fundamentals still point to strong sales, LaNeve said, including rising consumer confidence, low gas prices, an aging fleet of cars and trucks on the road and relatively low interest rates.

Even full-size pickup trucks, which had been selling briskly for much of the year, posted a sales decline. Ford, GM and Toyota pickup sales dropped, while Fiat Chrysler’s Ram sales were up 8 percent.

Toyota reported a 2 percent sales decline for the month as healthy sales of the RAV4 small SUV were overcome by falling demand for cars such as the Camry and Corolla. Fiat Chrysler sales fell 7 percent for the month as it continued to exit the small and midsize car business. Sales of the normally strong Jeep brand fell, by 17 percent.

Honda sales fell 7 percent as Accord midsize car sales fell 15 percent and couldn’t be balanced out by a 13 percent jump in sales of the CR-V small SUV.

Of major automakers, only Volkswagen reported an increase, of 1.6 percent over sales that were depressed a year ago by the company’s diesel emissions-cheating scandal.

While sales still are healthy, automakers are offering deals to compete for a piece of the shrinking pie. But there are signs that the industry is relying too heavily on incentives.

The average price paid per vehicle is starting to wane after years of steady increases, even for popular SUVs. Previously SUV prices kept growing while car prices fell due to sagging demand.

The average price paid for an SUV in April was $33,165, according to the consulting firm J.D. Power and Associates. That was down 2 percent from last April. One reason for the decline was that more customers were buying smaller, less expensive SUVs this year. But another was a whopping 18 percent increase in incentives, which hit $3,338 per vehicle.

Jeff Schuster, a senior vice president at the forecasting firm LMC Automotive, said automakers are fiercely competing so they don’t lose sales in the hot SUV market. But that can lead to inflated demand, overproduction and ever-higher incentives.

“This will have to balance with natural demand at some point relatively soon, or the industry will be heading into potential troubled waters and unhealthy habits,” he said.

Before the 2008 financial crisis, automakers were relying on incentives to boost sales and preserve market share, to the point that they were losing money on some models.

Pickup trucks were the only segment in which automakers offered fewer deals. Incentive spending was down 6 percent to $3,276 per vehicle. Customers were willing to pay $31,438 for a pickup in April, which was 1 percent more than a year ago.