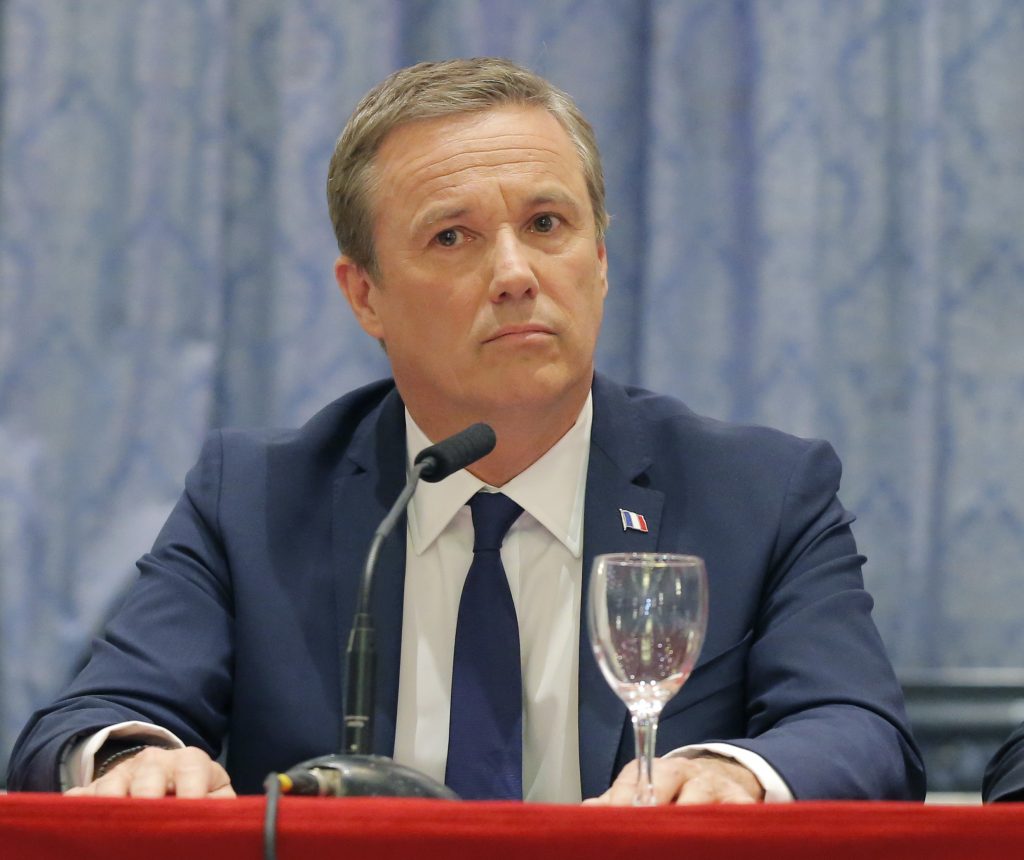 Dupont-Aignan is a nationalist whose protectionist economic policies are close to those of the National Front’s Le Pen and who, like her, wants to reduce the powers of European Union institutions.

He scored 4.7 percent of votes in the first round on April 23, and announced on Friday, as widely expected, that he was backing her for the decisive May 7 second round.

The alliance could help draw in other voters from the edges of the mainstream right, but it risks alienating some of the far-left support she needs if she is to upset the odds and win France’s most important election in decades.

“We will form a government of national unity that brings together people chosen for their competence and their love of France,” Le Pen told a Paris news conference, sitting with her choice for premier.

The first-round elimination of two other main presidential candidates, the far-left’s Jean-Luc Melenchon and conservative Francois Fillon, was greeted with relief by investors and EU partners of France, a founder of the bloc, a key member of the NATO defense alliance, and the world’s fifth largest economy.

Le Pen had for months seemed sure of a second-round place, even though the race was closely fought, and polls ahead of round one showed Macron with a far greater chance than Fillon of beating her next Sunday.

Melenchon, for his part, offered the prospect of a second-round choice between two candidates who would tear up international trade treaties and whose presidencies could be fatal to an EU already weakened by Britain’s departure.

Macron and Le Pen between them accounted for only 45 percent of the first-round vote, and the battle is now on for the remainder.

Polls show Macron winning next Sunday with about 59-60 percent, but the momentum has been with Le Pen, who has clawed back about five percentage points over the past week.

The presidential contest has blown apart traditional party loyalties. Voters now have a stark choice between a resurgent far right, once a pariah in French politics, and a man whose political movement is less than a year old and who has never held elected office.

It sets Macron’s enthusiasm for the EU and call for pro-business reforms to boost growth against Le Pen’s desire for France to close its borders to immigrants, unwind EU institutions and restrict imports to protect jobs.

“The May 7 election is about a European choice,” said outgoing President Francois Hollande, speaking at a meeting of EU leaders in Brussels.

Macron served as Hollande’s economy minister from 2014 to 2016 before turning his back on the Socialist government to prepare his own presidential bid.

Dupont-Aignan, who stood in the election for his party “Stand up France,” said he had signed an agreement on the future government with Le Pen that took into account some “modifications” of her program.

Dupont-Aignan is less hard-line than Le Pen in some areas such as reintroduction of the death penalty, and in 2013 he said that his party “cannot align ourselves with the extreme right.”

However, he is seen as having hardened his position on immigration since.

The 56-year-old, whose power base is in the suburban and semi-rural Essonne region south of Paris, has long been sought by Le Pen as a potential ally.

His party is an offshoot of the conservative mainstream right, claiming to represent the pure “Gaullist” tradition of post-war president Charles de Gaulle.

Macron, on a campaign trip in central France where he called politicians who do not back him “morally weak,” said on Saturday the alliance between Dupont-Aignan and Le Pen clarified the choice on offer to voters.