Business As Auto Sales Cool, There Are Great Deals to Be Had — and Worries of a Lending Bubble
Business 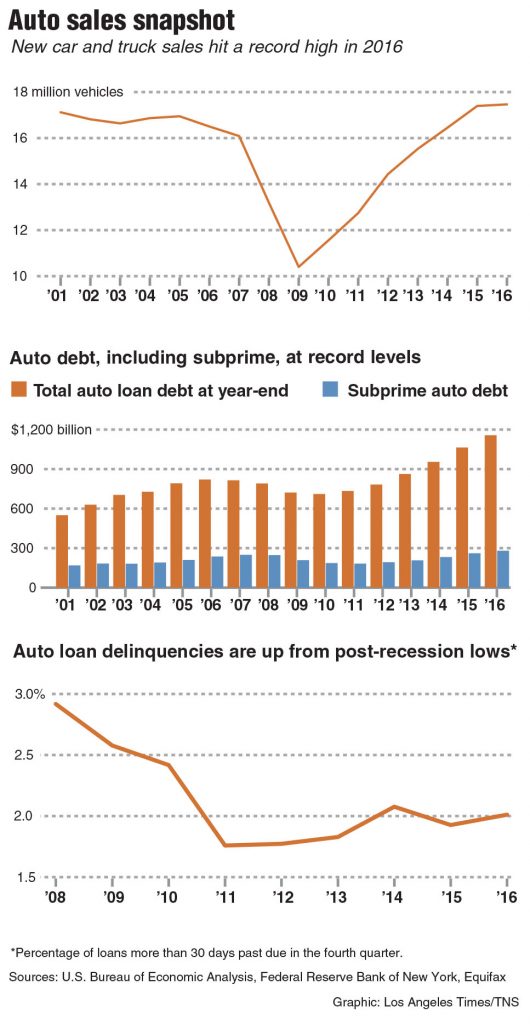 Heather Milne Barger and her husband knew it was about time to replace their 12-year-old Honda Civic hybrid this year — not only because it was showing its age, but because they knew there were bargains to be had.

“There were a lot of deals that dealerships were having, and cheap financing,” said Milne Barger, 44.

Sure enough, when the Southern California couple bought their new Subaru Outback in February, the dealership knocked $2,300 off the $29,400 list price — and offered them a no-interest loan.

Indeed, there’s rarely been a better time to buy a car or truck.

New-vehicle sales have set records in each of the last two years — juiced by continuing low interest rates, incentives and generous lending practices.

Now, America is awash in cars and trucks, and sales are on track to decline this year for the first time since the recession.

That means manufacturers and lenders will have to make sales and loan terms even more attractive than they have been if they want to maintain volume.

Carlos Badosa has sold cars at Toyota dealerships for almost 40 years, through boom times and lean years, but he’s never quite seen deals like he has lately.

Over the last few months, the Japanese carmaker has begun offering rebates of at least $2,000 on every model — and twice that amount for some slower selling sedans.

“That’s unheard of,” said Badosa, 62, finance director at Toyota of Downtown LA, who expects the deals might get even sweeter.

“I think inventories are very, very high. They have a whole lot of cars,” he said. “They need to get somebody to buy them. “

The Bargers have excellent credit, but car dealers and lenders have also been luring buyers with spottier credit records. And the results have been predictable.

A growing number of loans have been issued to subprime borrowers over the last few years and they’ve started to go bad at rates not seen since the recession.

“It raises the question: How does this end?” said Moody’s rating analyst Jason Grohotolski. “I feel like we’re at an inflection point, and it’s hard to tell at the moment whether discipline will prevail or loosening will continue.”

At his downtown Toyota dealership, Badosa has noticed not only sweeter incentives, but also plenty of easy credit offered by lenders, including Toyota’s in-house financing arm, as well as credit unions and specialty finance companies.

Lenders increasingly have been willing to make loans to customers who have limited credit histories. They’re also more willing to offer longer terms.

And 32 percent of loans had terms of longer than six years — up from 29 percent just a year earlier. Longer terms allow buyers to lower monthly payments, or to buy more expensive vehicles.

Badosa has even seen an uptick in seven-year loans that carry higher rates of interest.

“It’s still a small percentage, but it’s getting more common,” he said. “I don’t like it. It doesn’t do the customer any good, but when people want a car bad enough … we’ll find a way to get it for you.”

The last several years have already seen a big increase in auto lending, including subprime lending.

At the end of last year, Americans owed about $1.2 trillion in auto loan debt, a record amount, and car loans now represent more of total household debt — 9.2 percent — than they have since the end of 2002.

Roughly a quarter of that debt is owed by borrowers with subprime credit scores, according to the Federal Reserve Bank of New York and credit bureau Equifax. Although that’s a smaller percentage of overall auto debt than during the run-up to the recession, it’s a record amount. And a growing number are falling behind on their loans.

Two percent of subprime auto loan borrowers were more than 90 days behind — considered seriously delinquent — in the third quarter, up from 1.4 percent at the end of 2012, according to the New York Fed.

As those borrowers drive up delinquency rates overall, some lenders, especially banks, have tightened their credit standards, requiring higher scores and larger down payments. But others, particularly finance companies that specialize in loans to subprime borrowers, are moving in the opposite direction.

Paul Kerwin, chief financial officer of Westlake Financial Services, an LA auto lender that specializes in high-interest loans to customers with weak credit, said many of Westlake’s competitors have been too willing to offer risky loans.

Instead of Westlake’s typical loans for $10,000 or $12,000 that are paid off in four years or so, some lenders are offering much larger loans and longer terms.

“When lenders loosen, you get a $20,000 loan and a 72-month term, and now that’s just coming back to bite everyone,” Kerwin said. “A lot of it is putting a customer in too much car.”

In December, the average new car sold for a record $35,309, an increase of nearly $1,000 over the average paid in December 2014, according to auto information provider Kelley Blue Book. The firm cited a sudden shift toward trucks and sport utility vehicles as the key factor driving up prices.