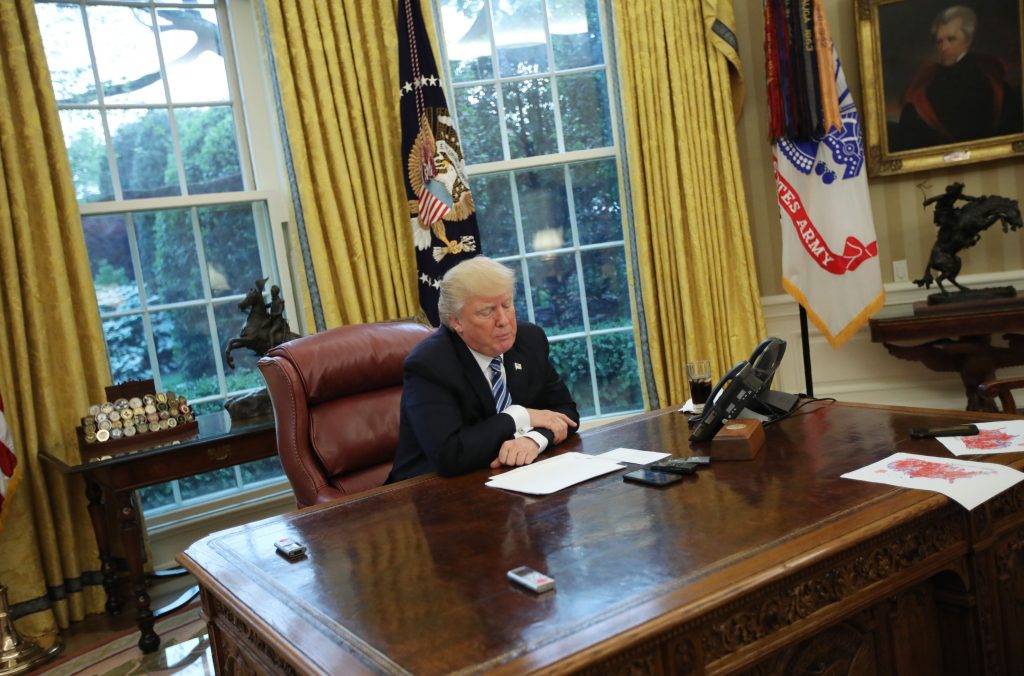 President Donald Trump said a major conflict with North Korea was possible over its nuclear and ballistic missile programs, while China said the situation on the Korean peninsula could escalate or slip out of control.

President Trump, speaking to Reuters on Thursday, said he wanted to peacefully resolve the crisis, possibly through the use of new economic sanctions, although a military option was not off the table.

“There is a chance that we could end up having a major, major conflict with North Korea,” President Trump said in an interview in the Oval Office.

Chinese Foreign Minister Wang Yi said there was a danger that the situation on the Korean peninsula could escalate or slip out of control.

Minister Wang made the comments in a meeting with a Russian diplomat on Thursday at the United Nations, the Ministry said in a statement.

China, the only major ally of North Korea, has been increasingly uncomfortable in recent months about its neighbor’s pursuit of nuclear weapons and long-range ballistic missiles in violation on U.N. resolutions.

President Trump lavished praise on Chinese President Xi Jinping for trying to rein in Pyongyang, calling him “a good man.”

U.S. Secretary of State Rex Tillerson said on Thursday that China has asked North Korea not to conduct any more nuclear tests. Beijing had warned Pyongyang it would impose unilateral sanctions if it went ahead, he added.

“We were told by the Chinese that they informed the regime that if they did conduct further nuclear tests, China would be taking sanctions actions on their own,” Secretary Tillerson said on Fox News, without specifying what sanctions he was referring to.

Tillerson did not say when China made the threat and there was no immediate confirmation from Beijing. He is due to chair a meeting with U.N Security Council foreign ministers on Friday, where he said he would stress the need for members to fully implement existing sanctions as well as possible next steps.

China banned imports of North Korean coal in February, cutting off its most important export, and Chinese media this month raised the possibility of restricting oil shipments to the North if it unleashed more provocations.

In a show of force, the United States is sending the USS Carl Vinson aircraft carrier group to waters off the Korean peninsula, where it will join the USS Michigan, a nuclear submarine that docked in South Korea on Tuesday. South Korea’s navy has said it will hold drills with the U.S. strike group.

Admiral Harry Harris, the top U.S. commander in the Pacific, said on Wednesday the carrier was in the Philippine Sea, within two hours’ striking distance of North Korea if need be.

Harris also said a U.S. missile defense system being deployed in South Korea to ward off any possible North Korean attack would be operational in coming days.

However, Beijing has been angered by the deployment of the Terminal High Altitude Area Defense, or THAAD, missile defense system, complaining that its radar can see deep into China and undermines its security.

President Trump said in the interview he wants South Korea to pay the cost of the THAAD, which he estimated at $1 billion. South Korea, one of Washington’s most crucial allies in the region, said the United States would have to bear the cost, pointing to possible friction ahead.

President Trump has vowed to prevent North Korea from being able to hit the United States with a nuclear missile, a capability experts say Pyongyang could have some time after 2020.

North Korea has conducted five nuclear tests and numerous missile tests, including one this month, a day before a summit meeting between Presidents Trump and Xi in Florida.

Any direct U.S. military action would run the risk of massive North Korean retaliation and huge casualties in Japan and South Korea and among U.S. forces in both countries.

President Trump, asked if he considered North Korean leader Kim Jong Un to be rational, said he was operating from the hope that he is rational. He noted that Kim had taken over his country at an early age.

In Moscow, Russian President Vladimir Putin and visiting Japanese Prime Minister Shinzo Abe called on North Korea and other countries on Thursday to avoid behavior or rhetoric that could increase tensions around Pyongyang’s nuclear program.