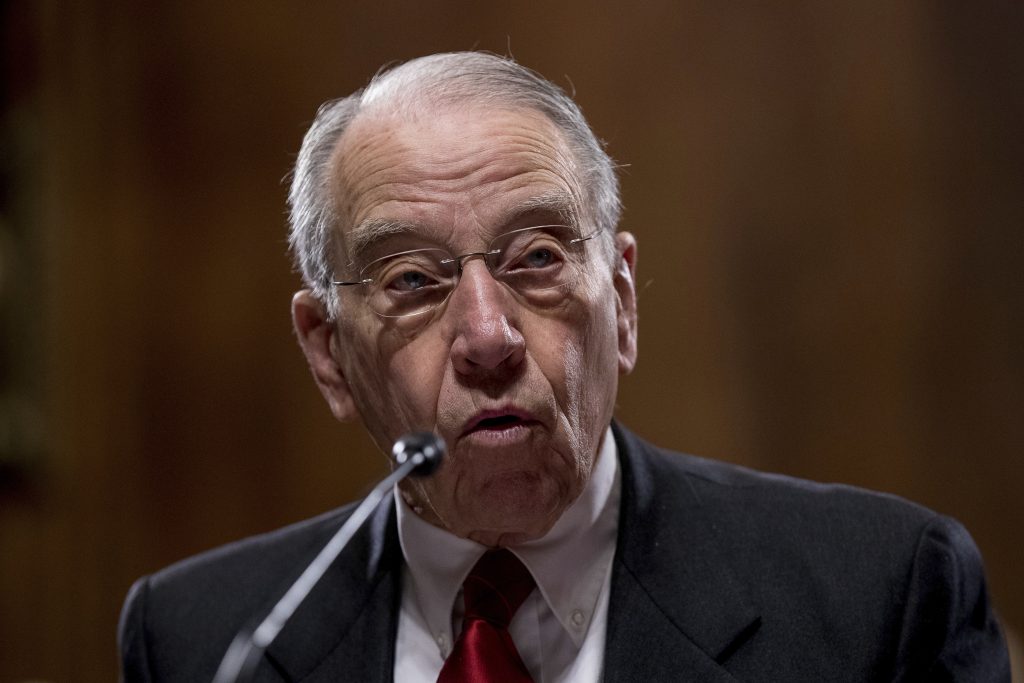 Grassley, an Iowa Republican and the influential chairman of the Senate Judiciary Committee, has asked the Centers for Medicare & Medicaid Services (CMS) officials to explain why they failed to collect nearly $125 million in potential overcharges identified at five Medicare Advantage plans audited in a single year.

In an April 17 letter to CMS Administrator Seema Verma, Grassley cited an article on alleged overcharges published in January by Kaiser Health News. The article said that Medicare had potentially overpaid five health plans $128 million in 2007, but under pressure from the insurance industry collected just $3.4 million and settled the cases.

“The difference in the assessment and the actual recovery is striking and demands an explanation,” Grassley wrote.

Medicare Advantage is a popular alternative to traditional Medicare. The privately-run health plans have enrolled more than 18 million elderly and disabled people — about a third of those eligible for Medicare — at a cost to taxpayers approaching $200 billion a year. The plans also enjoy strong support in Congress.

Medicare is supposed to pay the health plans higher rates for sicker patients and less for people in good health using a formula called a risk score.

Yet CMS records reveal that billions of tax dollars are wasted annually, partly because some health plans exaggerate how sick their patients are by inflating risk scores and boosting their payments improperly.

Grassley asked in his letter what steps CMS is taking “to ensure that insurance companies are not fraudulently altering risk scores” and how many audits are now being conducted.

“By all accounts, risk score gaming is not going to go away. Therefore, CMS must aggressively use the tools at its disposal to ensure that it is efficiently identifying fraud and subsequently implementing timely and fair remedies,” he wrote.

Grassley also noted that CMS needs to step up oversight audits because Medicare Advantage plans are expected to grow substantially in coming years.

“The use of these tools is all the more important as Medicare Advantage adds more patients, and billions of dollars of taxpayer money is at stake,” Grassley’s letter said.

The Government Accountability Office, the watchdog arm of Congress, has sharply criticized CMS for its failure to ferret out overcharges and in April 2016 called for “fundamental improvements” in audits of Medicare Advantage plans. GAO also found that CMS has spent about $117 million on Medicare Advantage audits, but recouped just under $14 million in total.

Medicare Advantage plans have been the target of at least a half-dozen whistleblower lawsuits alleging patterns of overbilling and fraud. In March, the Justice Department joined one such suit against insurance giant UnitedHealth Group. The suit alleges that the health plan submitted claims for underpayments to the government, but ignored examples in which it had received too much money.

The audits disclosing the $128 million in overpayments to health plans were part of a cache of confidential CMS documents released through a Freedom of Information Act lawsuit filed by the Center for Public Integrity.

The CMS records identify the companies chosen for the initial Medicare Advantage audits as a Florida Humana plan, a Washington state subsidiary of United Healthcare called PacifiCare, an Aetna plan in New Jersey and an Independence Blue Cross plan in the Philadelphia area. The fifth one focused on a Lovelace Medicare plan in New Mexico, which has since been acquired by Blue Cross.

In the audits, CMS repeatedly found that the health plans couldn’t document that their patients were as sick as the insurer had claimed.

For example, auditors couldn’t confirm that one-third of the diseases the health plans had been paid to treat actually existed, mostly because patient records lacked “sufficient documentation of a diagnosis.”

Overall, Medicare paid the wrong amount for nearly two-thirds of patients whose records were examined; all five plans were far more likely to charge too much than too little. For 1 in 5 patients, the overcharges were $5,000 or more for the year, according to the audits.

America’s Health Insurance Plans, an industry trade group, has denied that Medicare Advantage plans overcharge. The group argued in a June 2016 position paper that the auditing method used by CMS was “not yet stable and reliable.” The group also said that conducting audits “could disrupt the care being provided by plans that are working hard to meet the needs of their enrollees.”

Grassley cited reports by the Center for Public Integrity that improper payments to Medicare Advantage plans cost taxpayers as much as $70 billion from 2008 to 2013. He said that CMS’ estimate that it had overpaid the five health plans $128 million “appears low and could very well be just the tip of the iceberg.”