Thousands attended the levayah Wednesday morning of Hagaon Harav Avraham Yosef Rosenblum, zt”l, at Yeshivah Shaarei Yosher in Boro Park. The levayah then proceeded to the Vishnitz Bais Hakvaros in Monsey for kevurah.

Rav Rosenblum, zt”l, Rosh Yeshiva of Shaarei Yosher, was niftar on Monday night, acharon shel Pesach, surrounded by family, at the age of 89 in Maimonides Hospital, after an illness.

Rav Rosenblum was sought out for his daas Torah and hadrachah by thousands in the Torah world, famed as one of the spokesmen for Torah Jewry and guiding lights of Torah education in America.

He was a talmid of Harav Aharon Kotler, zt”l, at Beth Medrash Govoha in Lakewood, N.J. Once, when Rav Kotler learned that a certain Rav refused to make an appeal for the Lakewood yeshivah, he wondered aloud, “Who has talmidim like ours?” and he began listing his best talmidim, with Rav Yosef Rosenblum the first name mentioned.

In 1958, Rav Rosenblum was hired by Harav Yitzchok Dovid Koppelman, zt”l, founder of Yeshiva Shaarei Yosher, to serve as maggid shiur/mashgiach. He became Rosh Yeshivah in 1963, a position he held for the rest of his life.

During Rav Steinman’s visit to America 11 years ago, a gathering was held in the beis medrash of Yeshivas Torah Vodaath in Flatbush to discuss chinuch issues.

Rav Rosenblum, being a leading authority on chinuch, addressed the gathering, and discussed the many pressing problems affecting American Jewry.

Concerning the mechanech’s responsibilities, the Rosh Yeshivah declared: “Every mechanech must be aware that he is different from all those who have pursued other professions as shoemakers, diamond polishers, real estate brokers, and the like.

“Hashem decides who will serve as a mechanech, so be happy that you have been appointed to positions that carry responsibility for the education of our generation’s youth! Hashem has entrusted the souls of Jewish children into your care.

“The perpetuation of the Jewish people’s heritage until Moshiach’s arrival depends on you. A mechanech who knows that Hashem has specifically chosen him for this sublime task ought to feel tremendous pride.

“You are their leaders; you are leading them toward eternal life!” 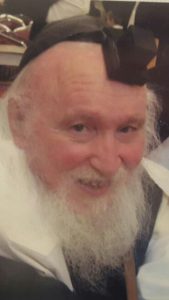 Relating to dropouts, the Rosh Yeshivah related that a boy who left the Torah path and later returned once came to him and said that learning Torah was very difficult for him. The antagonism toward learning that had built up within him during his younger years made it very difficult for him to now learn Torah, even though he knew intellectually that this was the best and the only true path.

“How does such a thing happen? We can’t absolve ourselves from soul searching. Let us examine our doings and engage in some probing.

“Torah’s influence upon the soul can be compared to the way a drug works on the body. A drug has to be used sensibly in order to heal a patient’s ailment or it can make his condition worse. Torah must also be used correctly for its virtuous properties to have the desired effect.

“The only way to attain eternal life and closeness to Hashem is through Torah. Torah is a force; it isn’t neutral. If it is used in the way that Hashem wants, it brings us eternal life and can even confer prophecy. If, however, it’s used incorrectly it acts as a ‘potion of death for those who steer to the left,’ and then anything can happen.”

The Rosh Yeshivah explained that there are usually two factors responsible for a child’s defection from the Torah path – alien ideologies, and desires.

“Today’s yetzer hara is of the second type — desires.

“When a person has no desire to learn Torah and he feels no satisfaction from it and from fulfilling mitzvos, he is drawn after what his eyes see and what his heart covets. Hashem created man in such a way that he must feel fulfillment in what he does in order to want to achieve more and more.

“What happens to someone who doesn’t occupy himself with Torah? Where does his drive to succeed and to achieve lead him?

“If a bachur stumbles in his younger years, going after the desires of his eyes and his heart, it is very difficult to extract him from that situation.”

The Rosh Yeshivah stressed that a child will only succeed if he is fortunate to have a mechanech who understands the merit of having been entrusted with the task of educating our precious children.

“Who deserves more positive encouragement? Who has worked harder? The gifted student who has managed to repeat a chiddush of Rabbi Akiva Eiger, or the weaker one who has put great effort into learning a mishnah?

“In the first case restrained praise is called for, while in the second, the child should be showered with enthusiastic praise and his efforts should be applauded.”