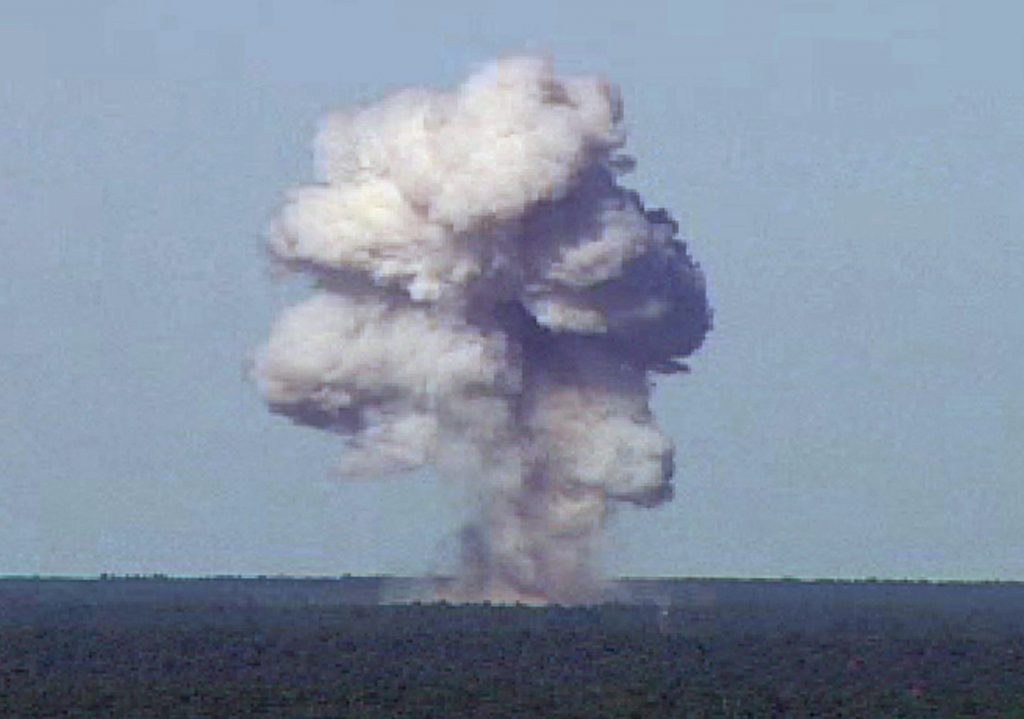 U.S. forces in Afghanistan dropped a 22,000-pound bomb on Islamic State forces in eastern Afghanistan Thursday, the Pentagon announced in a statement.

Gen. John Nicholson, the commander of U.S. forces in Afghanistan, said the bomb was “the right munition” to use against the Islamic State because of the group’s use of roadside bombs, bunkers and tunnels.

It is the first time the bomb, called a GBU-43, has ever been used in combat. The GBU-43 is one of the largest air-dropped munitions in the U.S. military’s inventory and was almost used during the opening salvos of the Iraq war in 2003. By comparison, U.S. aircraft commonly drop bombs that weigh between 250 to 2,000 pounds.

This particular bomb is not the biggest in the Pentagon’s non-nuclear arsenal. The larger 30,000 pound GBU-57 Massive Ordnance Penetrator, designed for destroying heavily fortified bunker complexes, has never been used outside a test environment. While the GBU-57 is heavier, the GBU-43 has a larger warhead and explosive yield.

The U.S. military has targeted similar complexes and dropped tens of thousands of bombs in Afghanistan, raising the question of why a bomb of this size was needed Thursday. It was unclear what the GBU-43 strike accomplished, as the bomb is not designed to penetrate hardened targets such a bunkers or cave complexes. A spokesman for U.S. forces in Afghanistan did not respond to a query regarding the bomb’s effects on its intended target, an Islamic State tunnel complex in Nangahar province.

The Pentagon said in its statement that “U.S. Forces took every precaution to avoid civilian casualties with this strike.”

The GBU-43 is an evolution of the unguided 15,000-pound BLU-82 bomb. First used in Vietnam, the C-130-launched BLU-82 was often dropped to turn patches of jungle into helicopter landing zones. This earned the BLU-82 the nickname “Daisy cutter.” The BLU-82 was used multiple times in the early stages of the war in Afghanistan when U.S. forces were closing on Osama bin Laden in the mountains of Tora Bora on the Afghan-Pakistan border.

The use of the GBU-43 in eastern Afghanistan comes less than a week after a U.S. Army Special Forces soldier was killed fighting in the same region. Army Staff Sgt. Mark De Alencar, 37, was mortally wounded by small arms fire Saturday.

U.S. and Afghan forces have been fighting the Islamic State in Afghanistan since 2015. Special Operations forces from the Army’s Ranger battalions as well as Green Berets have conducted numerous operations to push the militants out of their sanctuaries.

The Taliban, the insurgent group that has fought the United States and the Afghan government since 2001, also clashes with the Islamic State, though many of its members have defected to the terrorist group.

There are 8,500 U.S. troops in Afghanistan primarily split between counterterrorism operations and supporting the fledgling Afghan military. There are also about 7,000 NATO troops in the country responsible for helping train Afghan troops.

Officials at the Afghan Defense Ministry said they were first alerted to Thursday’s bomb through media reports.

“We have nothing officially on this so far, but the goal this year is to annihilate Daesh in the east and any other part of Afghanistan,” ministry spokesman Mohammad Radmanesh said, using the Arabic acronym for the Islamic State.

“We will use whatever force that is available to us, together with Resolute Support, and with the maximum amount of caution so that we don’t cause civilian casualties,” he said.

Hazrat Hussain Mashriqiwal, spokesman for police forces in Nangarhar province, where the bomb was dropped, said that international and Afghan forces had “for days” been involved in operations against the Islamic State affiliate. He also said he was not aware of the specific incident, which U.S. forces said took place around 7:30 p.m. local time.

Nangarhar’s Achin district is a stronghold of the local Islamic State branch in Afghanistan, which U.S. officials say is made up of mostly Pakistani and Uzbek militants. The group, which calls itself Khorasan Province, has struggled to expand beyond Achin and a handful of other districts in the east.

Achin is close to the Pakistani border, which has long been used by militants to smuggle weapons and fighters between the two countries. The group has also targeted tribal elders and fighters it suspected of being loyal to the Taliban.