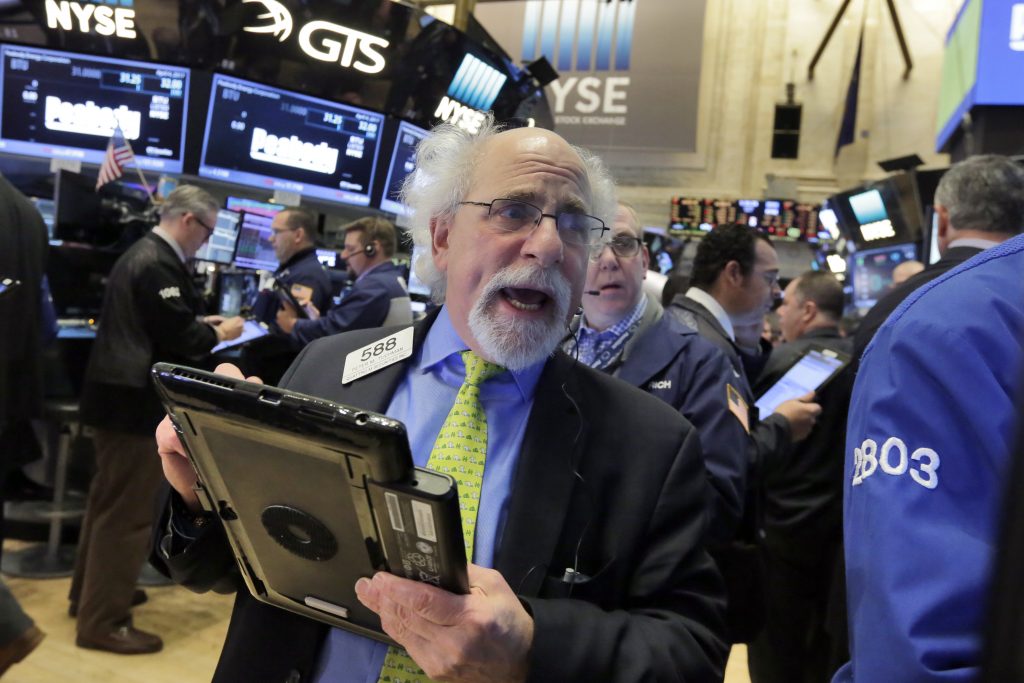 U.S. stocks are little changed at midday Tuesday as energy companies move higher with the price of oil. Other industries aren’t moving much overall, with industrial companies higher and banks trading lower. Department stores, apparel companies and handbag makers are falling, but Amazon continues to rise.

After that, Liberty Interactive will change its name to QVC Group and will focus on online retail.

STAPLES TRYING AGAIN? Office-supply company Staples climbed after The Wall Street Journal reported that Staples is talking to private equity firms about a potential sale. Staples tried to buy competitor Office Depot for $6.3 billion, but gave up on that effort last May after regulators opposed it and a federal judge agreed, saying it would reduce competition. Staples jumped 84 cents, or 9.7 percent, to $9.50.

CONN IS ON: Furniture and mattress retailer Conn’s surged after it announced a deal with Progressive Leasing, which will offer lease-to-own options to customers who don’t qualify for credit offered by Conn’s. Conn’s said that working with Progressive could improve its sales. The company’s fourth-quarter adjusted profit and sales were also a bit better than analysts expected. The stock rose $2.56, or 30.3 percent, to $11.01.

TAKEOFF: The Commerce Department said that orders to U.S. factories continued to grow in February, thanks to greater demand for commercial aircraft. Manufacturers have been recovering recently from a rough patch that was caused by weak economies overseas and the strong dollar, which made U.S. goods more expensive.

However, a measurement of business investment spending decreased for the first time since September.

Ralph Lauren dropped $3.87, or 4.8 percent, to $77.50 after it said it will close its Fifth Avenue store less than three years after it opened.

Handbag-and-accessories maker Kate Spade slumped after Reuters said that the company will take more time to negotiate a possible sale. The report cited anonymous sources and said that if Kate Spade is sold to a buyer like Michael Kors or Coach, it will likely be for less than the company’s recent valuation of $2.9 billion. Kate Spade sank $3.37, or 14.8 percent, to $19.43.

LIGHTS OUT: Lighting maker Acuity Brands tumbled after its second-quarter profit and sales disappointed analysts. The company said that the market for smaller projects remains weak, while sales in Europe, Mexico, and some other international markets were down and manufacturing costs were higher. The stock shed $225.24, or 12.5 percent, to $178.84.

OVERSEAS: Britain’s FTSE 100 gained 0.5 percent, and the CAC 40 in France rose 0.3 percent. In Germany, the DAX added 0.2 percent. The Japanese Nikkei 225 fell 0.9 percent as the yen gained against the U.S. dollar. The South Korean Kospi slipped 0.3 percent. Markets in Hong Kong and Shanghai were closed for public holidays.