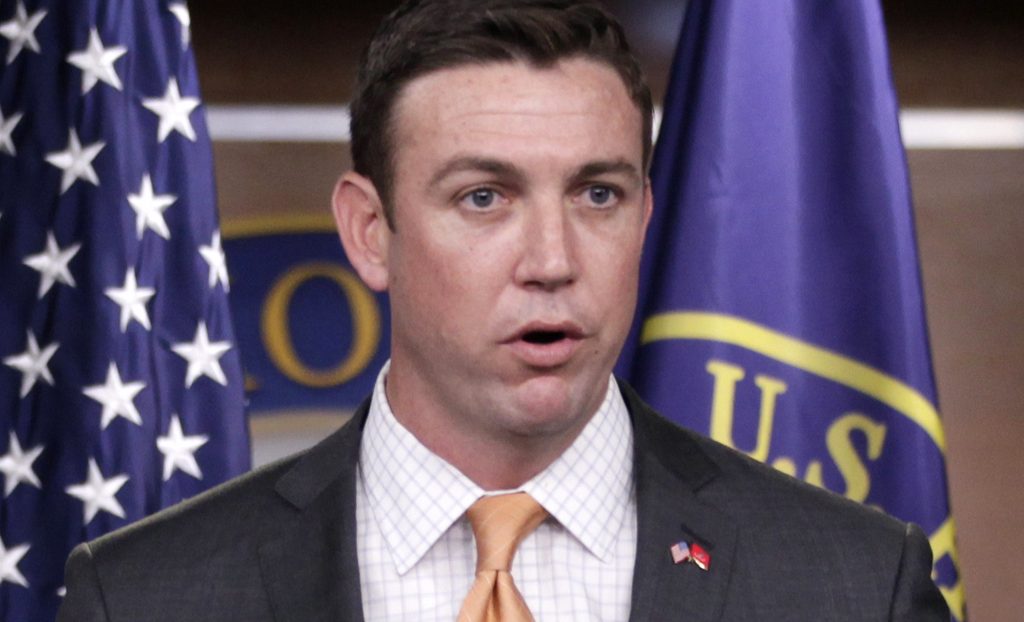 The Department of Justice requests that the U.S. House Committee on Ethics defer action in its review of campaign finance allegations against Rep. Duncan Hunter in a rare move that has signaled serious trouble for other lawmakers in recent history.

The Ethics Committee didn’t explicitly say why the Justice Department asked it to hold off on the review of allegations against Hunter, R-Calif., but it effectively laid bare the existence of an ongoing criminal investigation involving the congressman’s use of campaign money.

The Ethics Committee has been reviewing allegations that Hunter spent tens of thousands of dollars for personal purposes such as health care and family trips.

Political law experts say it’s rare for the Justice Department to ask the Ethics Committee to hold off on its own investigation. In recent instances, some lawmakers have ended up behind bars.

Hunter’s chief of staff, Joe Kasper, did not respond to requests for comment on this story.

Hunter’s attorneys — one of whom is a local criminal defense lawyer — released a statement following the committee’s announcement on Thursday.

The statement said Hunter “intends to cooperate fully with the government in this investigation, and maintains that to the extent any mistakes were made they were strictly inadvertent and unintentional.”

Since the Federal Election Commission and The San Diego Union-Tribune began asking questions about apparent personal spending of campaign funds in April 2016, Hunter has repaid his campaign some $62,000 in expenses it identified as personal, mistaken or insufficiently supported.

Hunter has attributed some of the charges, such as $1,300 for video games and $1,100 paid to an oral and facial surgeon in El Cajon, to mistakes and mix-ups between blue credit cards.

Experts say the Ethics Committee deferral to the Department of Justice raises the stakes for Hunter.

The Department of Justice has not made public the existence of an investigation, nor detailed what crimes it suspects Hunter or members of his campaign may have committed.

The Department of Justice typically asks the Ethics Committee and the Federal Election Commission to temporarily halt their own inquiries because there’s a risk that simultaneous civil investigations can complicate efforts to interview witnesses and bring charges within the time frame allowed by law.

“In any overlapping set of investigations, for obvious reasons, the criminal cases take precedence,” Herman said. Prosecutors “essentially want to clear the lane for them to do their investigation and be able to do it within the statute of limitations. … Once they’re done they will then relinquish that precedence and let other entities do their work.”

There’s no way for the public to know how often the Justice Department asks government agencies to hold off on their own probes while criminal investigation is ongoing, because most agencies, such as the FEC, aren’t required to tell the public.

The Ethics Committee, however, is legally required to work within certain rules and timelines, and it generally has to make a public statement if it decides to extend or delay its review beyond the allowable period of time. It also must give the public a reason for the extension or delay.

Since 2010, the Ethics Committee has released public statements about its review of allegations against dozens of lawmakers. The Union-Tribune identified four cases in which statements announced deferral to the Justice Department. Hunter’s case was the fifth.

In three of the four cases, the lawmaker under investigation was indicted, according to the Union-Tribune’s review of news coverage. A grand jury has been called in the fourth case.

Of the three lawmakers indicted, two were convicted of crimes and sent to prison. The third lawmaker’s criminal case was ongoing as of Friday.

Lawmakers accused of spending campaign funds for personal benefit have been indicted on charges including income tax evasion and making false reports to the Federal Election Commission.

“In the recent past, cases that were deferred by Ethics generally did result in criminal charges being brought, but that has not always been the case, said Brett Kappel, an attorney at Akerman LLP in Washington, D.C., and a noted expert in campaign laws and ethics rules. “Moreover, indictments have not always resulted in convictions. A deferral by the Ethics Committee isn’t a reliable predictor of whether there will ultimately be a conviction.”

Still, the Justice Department generally does not interfere with elections or ethics officials’ enforcement of the law unless a criminal investigation is ongoing and there is evidence that the violations were “knowing and willful,” Kappel said.

Trevor Potter, a Washington, D.C.-based attorney who is a former commissioner and chairman of the FEC and noted expert in campaign and election law, also said the Department of Justice wouldn’t ask the Ethics Committee to defer its review unless it had good reason.