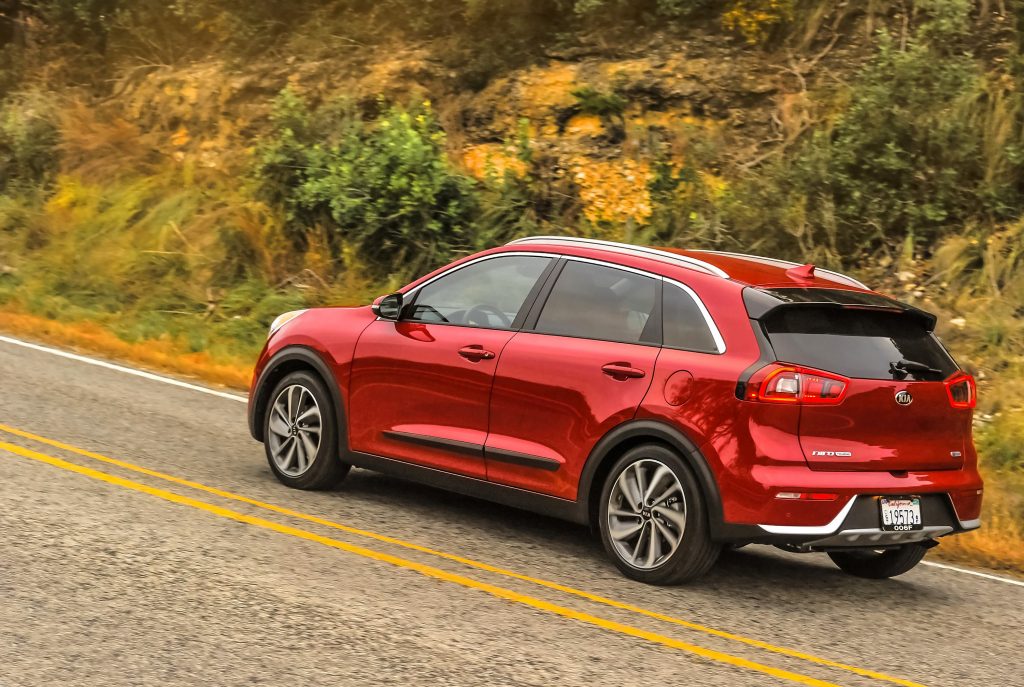 A good time to be buying an automobile in America just got better. So many choices. Such good cars. Just pick a style and a price point and go.

Kia Motors has added to the affordable sport utility vehicle mix with its 2017 Kia Niro — a name the company says is a mixture of “hero” and “near zero,” in reference to the little car’s high fuel economy and low emissions.

The Kia Niro is unusual in its class, as a hybrid crossover. In behavior, it’s a little like the Ford C-Max or the Toyota Prius. In looks and attitude, it more closely resembles a Honda HR-V, Nissan Rogue or Mazda CX-3.

The Niro makes peppy use of the small powertrain, getting a claimed 139 horsepower and 195 pound-feet of torque out of its combined 1.6-liter gas engine and electric motor.

That power goes to the front wheels via a six-speed dual-clutch transmission — not the CVT gearbox more often found on small crossovers. A center console-mounted stick shift even allows for manual-style shifting, which increases the sporty feel, though the car is missing the paddle shifters that are becoming increasingly common on sporty cars.

In regular driving mode, it’s about as sluggish as you’d expect from the relatively small engine displacement. In sport mode, though, the Niro turns peppy, and zips around town with brio.

The Kia Niro is built small and boxy, which offers pluses such as small-car handling and ease of parking and minuses such as limited legroom and headroom in the rear seats.

It’s a little noisy on the freeway, but no more so than comparable small SUVs, and holds the road like a bigger car.

The hybrid powertrain delivers extremely high fuel efficiency, with a highway score by the Environmental Protection Agency of 46 miles per gallon and a claimed highway driving range of 580 miles.

The four-door design makes for good entry front and back, and the hatchback rear opens to good cargo space — made better when the 60-40 split rear seats are folded down.

The rear seating area, while not especially large, does get its own climate control and slots for plug-in devices. The storage area below the rear hatch reveals no spare tire, though Kia includes an emergency tire repair system.

The cabin feels well-designed and well-made, with Honda- or Toyota-level fit and finish. I found the ergonomics comfortable, the visibility generous, the leather-like upholstery appealing, and the heated and ventilated seats very welcome in the recent cold-to-hot-to-cold weather pattern.

Built on a new platform that is similar to Kia’s Sportage and Forte, and using a hybrid engine that’s similar to the one in the Optima, the Niro comes in five trim levels.

But all five offer only one powertrain. There’s no all-wheel-drive version, which will disappoint some crossover customers, and no option for a more powerful engine — though a plug-in hybrid version is promised for late this year or early next, and a fully electric plug-in may follow.

Kia is pushing the Niro pretty hard with an advertising blitz.

Company representatives said Kia engineers’ mandate, having heard that fellow Korean car company Hyundai was building its Ioniq and Sonata Prius-killers, was to design a hybrid that was handsome and rugged instead of “weird-looking.”

It’s too soon to know whether the car can compete on a sales level with the Prius V, or the HR-V, C-Max or RAV4.

But Kia says that more than half the people buying Niros are new to the brand and that the car most often traded in has been the Prius.