Politics Gorsuch Hearings Day 3: Nominee Refuses to Be Pinned Down by Democrats
Politics 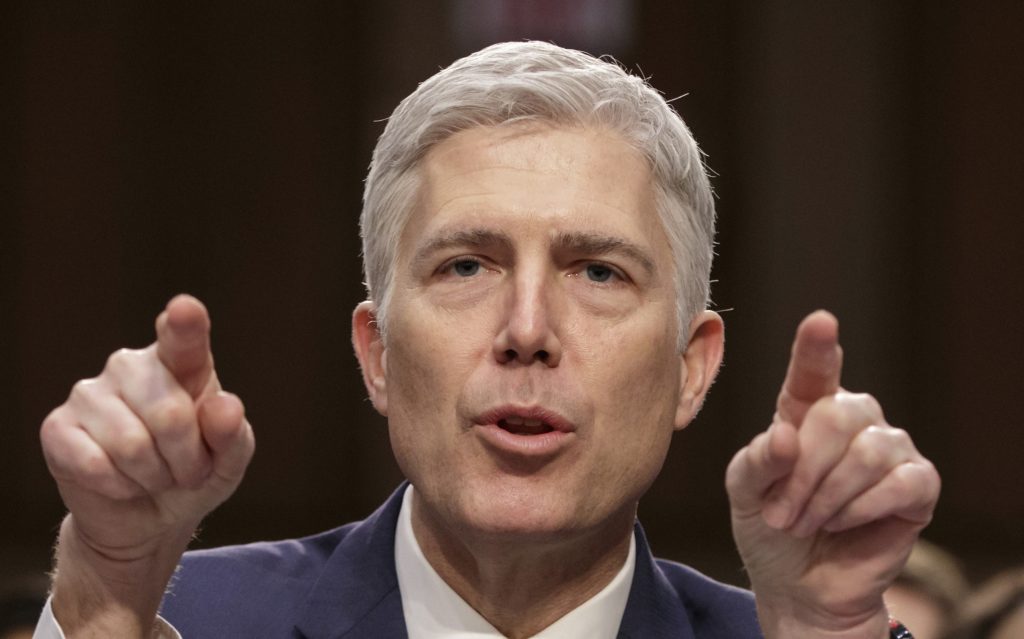 Democratic senators pressed Judge Neil Gorsuch Wednesday to explain his views on issues such as the Constitution’s “emoluments clause” and the notion of “high crimes and misdemeanors,” questions designed to more aggressively probe his independence from President Donald Trump.

“What vision do you share with President Trump?” the senator said.

“Respectfully, none of you speaks for me,” Gorsuch said. “I am a judge. I am independent. I make up my own mind.”

“The qualifications for Senate confirmation shouldn’t be skillful evasion of questions, it’s not how the process is supposed to work,” Mr. Schumer wrote Wednesday.

“If anyone doubts Judge Gorsuch could be an activist judge with strong conservative views, eschewing interests of average people, look how he was selected.”

Wednesday’s hearing marked what is likely the last day of testimony for Gorsuch before the Senate Judiciary Committee, where he has made a particular effort to stress his independence from Mr. Trump and defend the integrity of the judicial system.

At one point, Gorsuch seemed to reject a Feb. 13 comment from senior White House policy adviser Stephen Miller that Mr. Trump’s actions on national security “will not be questioned,” which some interpreted as a signal that Mr. Trump could ignore judicial orders.

“You better believe I expect judicial decrees to be obeyed,” Gorsuch said. He quoted an unnamed judge he called “one of his heroes”: “The real test of the rule of law is [whether] the government could lose in its own courts and accept those judgments.”

Still, some senators remained less-than-satisified with his answers.

Under questioning from Leahy, Gorsuch dodged questions on the emoluments clause, which states the president cannot accept gifts from foreign agents without approval from Congress.

Trump critics, including prominent ethics lawyers from the Barack Obama and George W. Bush administrations, have accused Mr. Trump of accepting emoluments through his business in violation of the Constitution.

Gorsuch also declined to give his view on Judge Scalia’s characterization of the Voting Rights Act as a “perpetuation of racial entitlement.”

“Senator, I don’t speak for Justice Scalia. I speak for myself,” he said.

“You have been very hesitant to even talk about various Supreme Court precedents,” Leahy told Gorsuch, noting that Justices John Roberts and Samuel Alito took positions on specific cases during their confirmation hearings.

“Other nominees have been able to discuss precedent, and I was hoping you would be as transparent as these prior nominees were.”

“Over the last three days we’ve heard a description of your legal philosophy and the reasoning behind it time and time again.”

Over the course of his hearings, Gorsuch has refused to be pinned down on most of the issues that Democrats raised: his views on money in politics, the extent of the Second Amendment.

He portrayed what Democrats saw as controversial rulings in his 10 years on the U.S. Court of Appeals for the 10th Circuit in Denver as authentic attempts to interpret the laws that Congress writes.

“If we got it wrong, I’m very sorry, but we did our level best,” he said about a decision criticized by Durbin, but added: “It was affirmed by the Supreme Court.”

Sen. Dianne Feinstein discussed a book that Gorsuch wrote in which he opposed physician-assisted suicide, and said any taking of a human life was wrong.

Sen. Feinstein mentioned the deaths of her father and a close friend, which she said were agonizing. She mentioned California’s recent physician-assisted suicide law.

“My heart goes out to you,” Gorsuch said, and then appeared to choke up when he mentioned the death of his own father. He said his personal views would have no role in his duties as a judge, and noted the Supreme Court has ruled that states may allow laws such as California’s.

Democratic senators also raised questions about a decision that had just been issued across the street from the hearing room – literally – at the Supreme Court.

The eight sitting justices decided unanimously on Wednesday to boost the standards of education that public schools provide to learning-disabled students, rejecting an earlier ruling from the U.S. Court of Appeals for the 10th Circuit – the one that Gorsuch serves on – saying that it had set the bar too low for students.

At issue was whether schools must provide disabled children “some” educational benefit – which several lower courts have interpreted to mean just more than trivial progress – or whether students legally deserve something more. Gorsuch serves on the 10th Circuit Court of Appeals, which is among the majority of appeals courts that subscribe to the “some” benefit standard. A minority of circuit courts have set higher expectations for schools, and the Supreme Court used a case brought by the parents of a Colorado teenager with autism to set a uniform standard for the nation.

In response to questions by Sen. Richard Durbin, D-Ill., Gorsuch defended his court’s decision, saying that they were applying what the 10th Circuit had decided in a 1996 case, which adopted the standard that the services have to be more than de minimis.

“I was bound by circuit precedent,” Gorsuch said, saying that ruling against an autistic child and his parents was “heartbreaking.” He added that his circuit was unanimously taking the same position in all such cases. Now the Supreme Court has said that is the wrong standard: “Fine, I will follow the law.”

Mr. Durbin said Gorsuch had made the precedent worse by adding the word “merely” to the standard.

“To suggest I have some animus against children,” Gorsuch started, his voice trailing off.

“Please,” Durbin said, no one was suggesting that – just a wrong reading of the law.

Gorsuch declined to express his views on Mr. Trump’s move to ban travelers from several Muslim-majority countries because “that’s an issue that is currently being litigated actively.”

When Leahy mentioned that a Republican lawmaker recently suggested that Gorsuch would uphold Mr. Trump’s ban if it came before the court, Gorsuch snapped: “Senator, he has no idea how I’d rule in that case.”