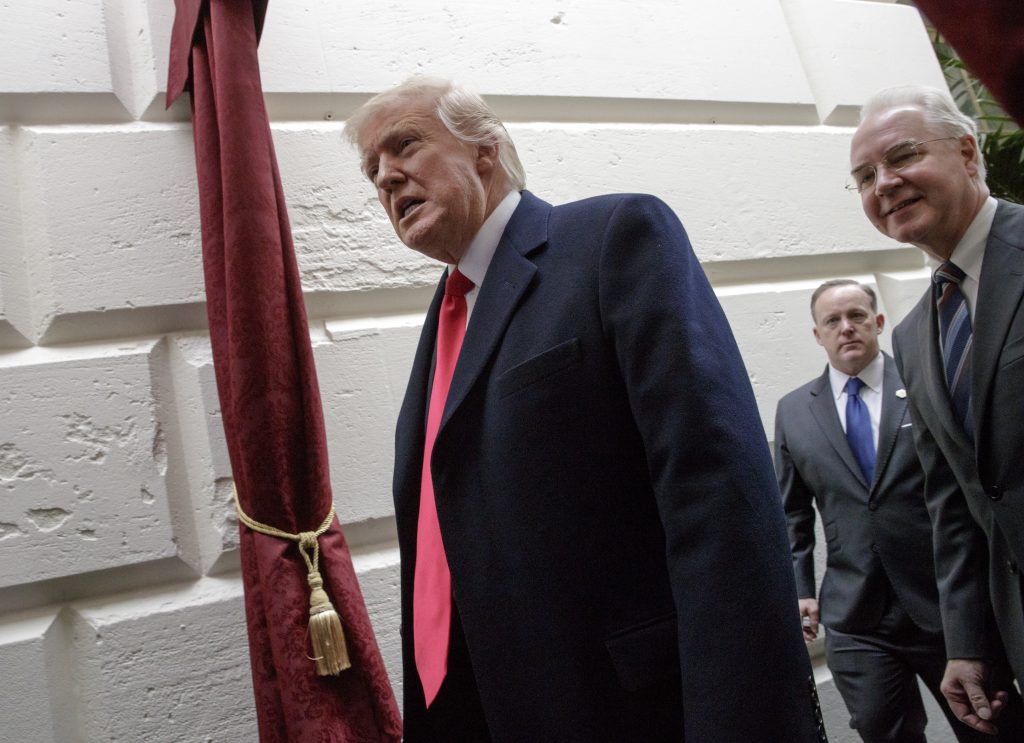 President Donald Trump on Tuesday warned House Republicans that they would lose their seats in next year’s midterm elections if they failed to back the GOP health care overhaul and fulfill a long-promised goal to undo Barack Obama’s Affordable Care Act.

In a rare trip to the Capitol, the president met behind closed doors with rank-and-file Republicans, some wavering on the legislation two days before a climactic vote. Top House Republicans unveiled revisions to their bill Monday night in hopes of nailing down support.

President Trump’s message to Republicans: “If you don’t pass the bill, there could be political costs,” said Rep. Walter Jones, R-N.C.

According to a person in the room who described the closed-door meeting on condition of anonymity, the president explicitly predicted that many House Republicans would lose seats; and the party would lose control of the chamber in next year’s election if the bill fails.

“I’m optimistic that none of my members, in the end, want to be responsible for the status quo on Obamacare,” said Mr. McConnell, referring to the law that Republicans have set out to dismantle this year. He said when the Senate debates the GOP measure, he would “have the president weigh in with our folks as well.”

The GOP bill would dismantle Mr. Obama’s requirements that most people buy policies and that larger companies cover workers. Federal subsidies based largely on peoples’ incomes and insurance premiums would end, and a Medicaid expansion to 11 million more low-income people would disappear.

The Republican legislation would provide tax credits to help people pay medical bills based chiefly on age, and open-ended federal payments to help states cover Medicaid costs would be cut. Insurers could charge older consumers five times the premiums they charge younger people instead of Obama’s 3-1 limit, and would boost premiums 30 percent for those who let coverage lapse.

Rep. Chris Collins, R-N.Y., said that Mr. Trump told Republicans he would campaign for them if they backed the bill. President Trump didn’t indicate what he would do to those who vote against the bill; but during the caucus, he singled out Rep. Mark Meadows, R-N.C., one of the outspoken critics of the bill.

Mr. Collins said President Trump asked Meadows to stand up, called him a great guy and said he is counting on Meadows to get this over the line.

“The president is very adroit at putting somebody on the spot, and he did that today with Mark Meadows,” Mr. Collins said. Asked if there was a threat to Meadows in that, Collins responded: “There was no threat whatsoever.”

Speaker Paul Ryan, R-Wis., told reporters that if Republicans pass the legislation, “People will reward us. If we don’t keep our promise, it will be very hard to manage this.”

President Trump’s closed-door meeting with House Republicans came as party leaders released 43 pages worth of changes to a bill whose prospects remain dicey. Their proposals were largely aimed at addressing dissent that their measure would leave many older people with higher costs.

Included was an unusual approach: language paving the way for the Senate, if it chooses, to make the bill’s tax credit more generous for people age 50-64. Republicans said that the plan sets aside $85 billion over 10 years for that purpose.

The leaders’ proposals would accelerate the repeal of tax increases that Mr. Obama imposed on higher earners, the medical industry and others to this year instead of 2018. It would be easier for some people to deduct medical expenses from their taxes.

Older and disabled Medicaid beneficiaries would get larger benefits. But it would also curb future growth of the overall Medicaid program, which helps low earners afford medical coverage, and let states impose work requirements on some recipients. Additional states could not join the 31 that opted to expand Medicaid to more beneficiaries under Mr. Obama’s law, the Affordable Care Act.

In a bid to cement support from upstate New Yorkers, the revisions would also stop that state from passing on over $2 billion a year in Medicaid costs to upstate counties, though it exempts Democratic-run New York City from that protection. The change was pushed by Mr. Collins, one of President Trump’s first congressional supporters. Local officials have complained that the practice overburdens their budgets.

Republican support teetered last week when a nonpartisan congressional analysis projected that the measure would strip 24 million people of coverage in a decade. The Congressional Budget Office also said the bill would cause huge out-of-pocket increases for many lower earners and people aged 50 to 64.

Democrats have opposed the GOP repeal effort. They tout Mr. Obama’s expansion of coverage to 20 million additional people and consumer-friendly coverage requirements it imposed on insurers, including abolishing annual and lifetime coverage limits and forcing them to insure seriously ill people.

House approval would give the legislation much-needed momentum as it moves to the Senate, which Republicans control 52-48 but where five Republicans have expressed opposition.