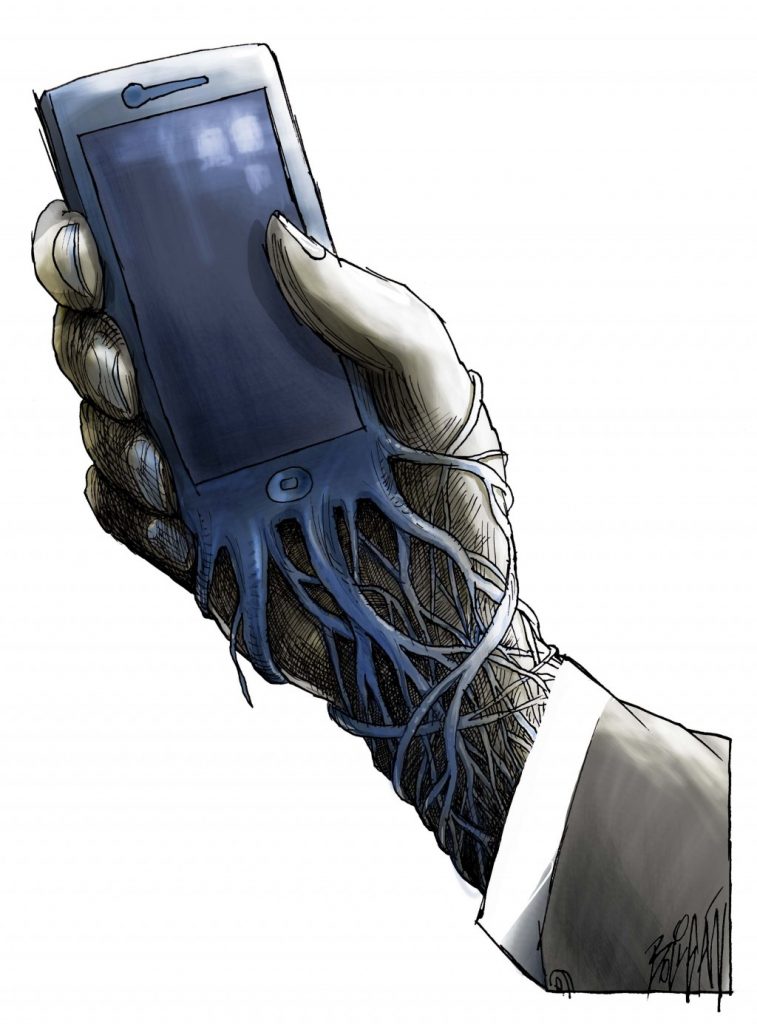 Although it is a psychotherapist’s job to help others overcome difficulties, I recently decided that I needed to give myself some therapy. Let me share with you why. I was on a train on the way to give a talk. I reached into my pocket to check my cellphone to see if I had received any messages or emails. This might not seem out of the ordinary, except that just two minutes later the exact same thing happened. I instinctively reached into my pocket to check my cellphone for any new messages or emails that may have come in the last one hundred and twenty seconds. This called for some self-assessment (for which I did not charge myself a fee!). Why, I asked myself, did I need to check my phone again just two minutes after I had already checked it? What had happened to the day when I was content just to sit in the train and read, relax or learn? How had I gotten to this point? Looking all around me, I could see that everyone else was doing precisely the same as me. What is it about the cellphone that seems so addictive? I decided that further investigation was required.

On a day-to-day basis I encounter people suffering from all sorts of addictions. There are the common ones like alcohol, drugs and gambling and there are the less common ones. For example, I recently met someone suffering from an addiction to smelling salts! But there is one addiction that is silently trapping millions and millions of victims every day. What makes it worse is that this addiction is considered by the world to be relatively harmless. This is what makes us all so vulnerable. We all own one, we all use one and so we are all capable of being trapped by cellphone addiction.

The cellphone has already claimed many victims. I recently received a call from a frantic mother. She had caught her son on Shabbos using his phone under the bed covers. She was devastated and shocked. Her son, she said, was a good boy who was doing well in yeshivah and was certainly not a teen who had ever demonstrated an anger and rebelliousness toward Yiddishkeit. “What could possess him to do such a thing?” she asked me in a tear-choked voice.

A successful businessman was referred to me because he was suffering from insomnia. “How could you help me improve my sleep?” he asked. He later admitted that he is checking the financial markets on his phone at regular times throughout the night and day. Now I understood where this problem had come from.

Then there is the latest addition to davening, a siddur in one hand and a smartphone in the other. Last week I was in the middle of a consultation with somebody when he suddenly realized that he had left his cellphone in the taxi on the way to the appointment. His calm demeanour changed in an instant. Panic gripped him and as the realization hit that he might have lost his cellphone, he began to tremble. The story has a happy ending, you will be pleased to know. He managed to track down the particular taxi (using his spare cellphone!) and was told that his phone had been found. His panic and fear were now replaced with sheer euphoria. It was as if he had won the lottery!

It came as no surprise to me that, after I researched the problem further, I found that our attachment to the cellphone is already having a huge impact in every area of our lives. According to a recent survey, the average person checks his phone over 150 times a day. This obsessional behaviour is shattering attention spans, from the very young to the elderly. Reading books, listening to shiurim, even speaking to people face to face is fast becoming a test on our concentration. Being constantly connected to the world hugely increases our stress levels. We find it difficult to switch off and many vacations are ruined because we are still at our virtual desk, albeit in a more exotic location.

Relationships and old-fashioned communication now have to compete with the cellphone which is instantly gratifying, exciting and more informed than human beings can ever be. As our phone usage invades sleep and we deprive our mind and body of rest, it is unsurprising that the rates of those suffering from insomnia has rapidly increased in recent years. It’s also no wonder that the obligation we feel to stay connected to social networks, the worrying we have about why we have not received a message and our constant checking are the perfect ingredients for anxiety.

[The cellphone has brought with it new terminology too. A “phantom vibration” is where you do not have a new message but are convinced that you felt the vibration of your phone, indicating that you have one. This is typically likely to occur on Shabbos, causing initial horror that your phone is in your pocket before quickly turning to relief when you recognize it is a phantom vibration. “FOMO” (Fear of Missing Out) is anxiety that an exciting or interesting event may currently be happening elsewhere, from which you have been excluded, which is exacerbated by posts seen on social media. “Digital Dementia” is characterized by memory deficits and emotional flattening among people who spend too much time staring at a screen, and “nomophobia” is the fear of being without access to a working cellphone, be it from lack of signal or dying battery.]

How is it that a device not much bigger than a credit card can be so addictive?

Put simply, our brains love rewards, treats and good feelings. Scientists have discovered that when we hear a bleep from a phone alerting us to a text, email or tweet, our brain gets a treat (called dopamine). The messages that give us the most pleasure and are the biggest treats to the brain are a message from a friend, a phone call from a loved one or that funny video we must see. It’s the big treat that is addictive to us and, since we don’t know when that big treat is coming, we need to check compulsively and as often as the ringtone calls us. We feel compelled to look at the screen and answer, regardless of where we are, with whom we are and what we are doing. Although some experts may minimize the addictiveness of cellphones, as far as I am concerned, cellphones operate in the same way as other addictive substances like alcohol. Just as alcoholics depend on the alcohol, so habitual cellphone users begin to depend on their phone. Just as a drug addict feels anxious and panicky when he is withdrawn from his substances, so spending time away from the phone can make us feel anxious or panicky. Anything that we use to lift our mood has the potential to be addictive, and therefore the little cellphone, which is available to us every minute of the day, provides the ideal platform for addiction.

So what can we do about it? The reality is that the cellphone is here to stay and in the technological age in which we live, it will only play a more intrinsic role in our lives. Yet, if we carry on in the naïve manner with which we currently use these devices, the consequences on both our spiritual and emotional way of life will be enormous. One expert in England recommends that in the same way that cigarette packets have warnings on them, so should mobile phones. Warning messages should also be displayed before downloading certain addictive apps.

I believe that we need to treat cellphones like the ultimate “frenemy” — like a friend, but one who does not always have our best interests at heart. We need to set firm boundaries limiting and controlling our usage not only as to what we have access, but also for how long. These should be implemented not just for our youth but for every single one of us. It is too easy to stand on a pedestal and preach to our children. The harsh reality is that, as adults, we are at risk too. A home could have a “cellphone tray,” where everyone who has a phone places it in the tray when they enter the house and are together. The therapy I gave myself was to start practicing using the silent feature more regularly, a feature that every phone has. We need to be able to disconnect from the phone and the world and instead learn to once again to reconnect to ourselves and those around us. If we are really intent on changing, how about locating the off button, pressing it and leaving your cellphone off for periods of time each day?

Each person needs to understand his/her own usage to honestly recognize how attached they have become and implement ways they can become less dependent on their phone. These steps may seem trivial or unnecessary, but never has there been a greater urgency for us to act and never has there been a greater danger of us forgetting what truly matters most.