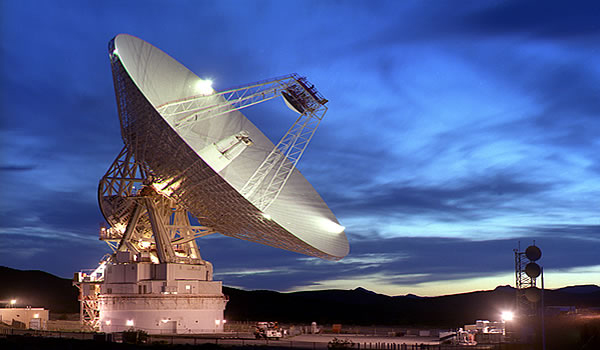 No one had heard from Chandrayaan-1 since Aug. 29, 2009. That’s when the pioneering moon orbiter – the first lunar probe ever launched by the Indian Space Research Organization – abruptly went silent just 312 days into what was supposed to be a two-year mission.

The orbiter has been missing ever since. It’s no bigger than a refrigerator and difficult for Earth-based telescopes to discern, given the moon’s nighttime glow, making the craft hard to track down. Plus, the moon’s lopsided topography – riddled with mascons, or areas of dense material with higher-than-average gravitational pull – makes satellites’ orbits incredibly unpredictable.

But the silent, stealthy Chandrayaan-1 couldn’t evade powerful radio telescopes. Scientists at NASA’s Goldstone Deep Space Communications Complex in California’s remote Mojave Desert and at the National Science Foundation’s Green Bank Telescope in West Virginia worked together to detect the long-lost orbiter by sending out radio waves in its direction and listening for the echoes that bounced back.

“To be declared lost and then found after eight years is a great accomplishment,” Krishnaswamy Kasturirangan, the former ISRO chair who helped conceive the moon mission, told the Times of India.

The search technique, developed by researchers at the Jet Propulsion Laboratory in California, is a new one. Capitalizing on the fact that Chandrayaan-1’s orbit takes it over the moon’s north pole, they used Goldstone’s largest antenna to direct a powerful beam of microwaves toward the spot they expected the probe to be. The antenna is usually used to communicate with spacecraft much farther away – it’s still in touch with the Voyager 1 probe way outside the solar system. But it could also be applied much like a police officer’s radar gun.

When the microwaves struck Chandrayaan-1, they bounced back toward Earth, where the Green Bank radio telescope was listening. During four hours of observations, Green Bank detected two blips that resembled the signature of a small spacecraft. That timing matched the period of Chandrayaan-1’s orbit. The data also provided information about the spacecraft’s speed and distance from Earth, which could be used to update projections of its orbit, and subsequent radar observations confirmed the new calculations.

The researchers used the same technique to find NASA’s Lunar Reconnaissance Orbiter – an easier task because the LRO is still operational.

But this could be just the beginning of interplanetary radar investigations. The void between planets is filling up with human-made spacecraft, and it’s only going to get more crowded. If scientists want to prevent potentially devastating collisions, they’re going to need a powerful system to keep track of everything.

“Ground-based radars could possibly play a part in future robotic and human missions to the moon, both for a collisional hazard assessment tool and as a safety mechanism for spacecraft that encounter navigation or communication issues,” according to a NASA statement.