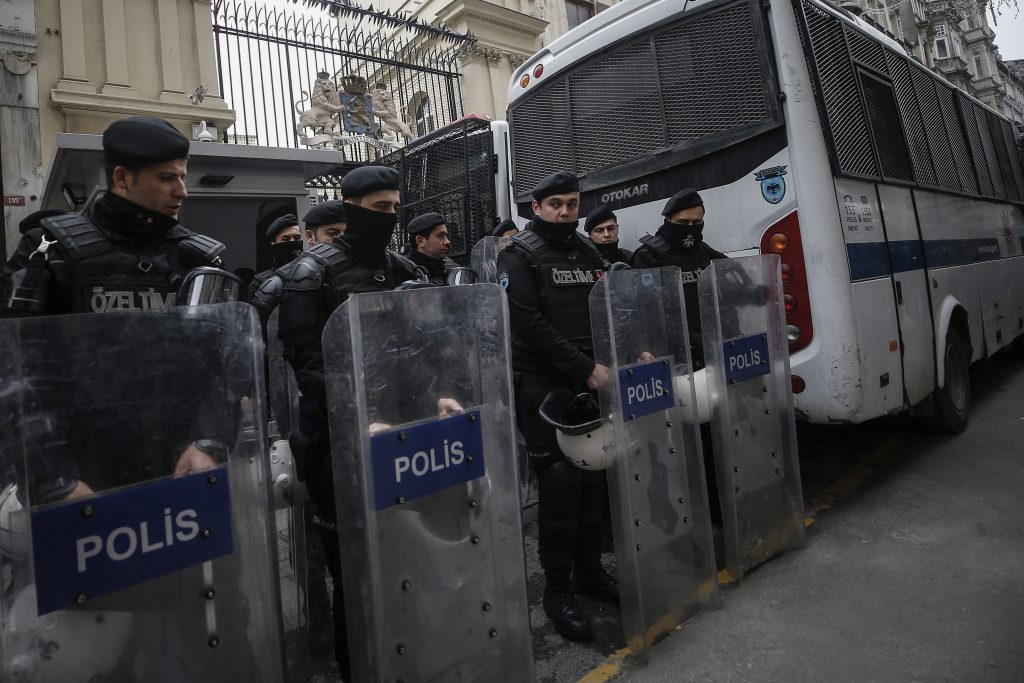 Turkey and the Netherlands sharply escalated a dispute between the two NATO allies on Saturday as the Dutch blocked a campaign visit by the Turkish foreign minister, prompting Turkish President Recep Tayyip Erdogan to call them “fascists.”

From blocking Foreign Minister Mevlut Cavusoglu to land in the Netherlands in the morning to Turkish officials closing off the Dutch Embassy in the evening, relations between the two sank ever deeper in the diplomatic standoff over the right of Turkish government officials to speak about their political plans at rallies in Europe.

The Dutch first withdrew the landing rights of the foreign minister because of objections to his intention to rally in Rotterdam for a Turkish referendum on constitutional reforms to expand presidential powers, which the Dutch see as a step backward from democracy.

“They do not know politics or international diplomacy,” Erdogan told a rally in Istanbul. “These Nazi remnants, they are fascists,” he added, as the crowd booed.

Dutch Prime Minister Mark Rutte called it “a crazy remark, of course. But I understand they are angry but this is of course way out of line.”

Erdogan told a rally in Istanbul: “You can stop our foreign minister’s plane all you want, let’s see how your (diplomatic) planes will come to Turkey from now on.” Cavusoglu also referred to possible sanctions, and Rutte said consultations under such threats were impossible, forcing him to bar the visit.

The government said it withdrew the permission because of “risks to public order and security,” causing Cavusoglu to say: “so is the foreign minister of the Turkish republic a terrorist?”

He added that “we will give them the response they deserve.”

In the evening, a Turkish foreign ministry official who spoke on customary anonymity said the Dutch Embassy in Ankara and its consulate in Istanbul were closed off because of security reasons.

The official said entries and exits were closed to the two locations. Similar precautions were taken at the Dutch charge d’affaires’ house and the ambassador’s residence.

The Turkish foreign ministry also said that it doesn’t want to see the Dutch ambassador, who is out of the country, return to his post because of the increasingly divisive dispute with the Netherlands.

Cavusoglu, who was speaking at Istanbul’s airport, didn’t say where his next European destination was. French authorities say he’s scheduled to travel to the northern city of Metz on Sunday. Turkish officials have been campaigning in various European cities before the April 16 referendum.

Around 100 people marched in Istanbul to protest the Dutch decision, with demonstrators placing a black wreath in front of the Dutch Consulate amid a heavy police presence.

At dusk in Rotterdam, about 100 pro-Turkish demonstrators had gathered outside the Turkish Consulate with flags in a peaceful protest following the acrimonious words between both governments.

The state-run Anadolu news agency said the Family and Social Policies Minister decided to go to Rotterdam via road from Germany, but police closed off the road in front of the Turkish consul-general’s residency. Dutch authorities couldn’t immediately confirm the information.

The diplomatic row comes at a time when relations between Turkey and the European Union, of which the Netherlands is a member, have been steadily worsening, especially in the wake of Erdogan’s actions since last year’s failed coup. More than 41,000 people have been arrested and 100,000 civil servants fired from their jobs.

Cavusoglu said that “unfortunately Europe and several countries in Europe, the Netherlands being in the first place, they are reminiscent of the Europe of World War II. The same racism, Islamophobia, xenophobia, anti-Semitism, we see all the crimes against humanity in today’s politics.”

The dispute also comes just days before the Netherlands goes to the polls in a March 15 election for the lower house of Parliament. The campaign has been dominated by issues of identity, with anti-Islam lawmaker Geert Wilders set to make strong gains.

After Wilders accused the government of a weak response to Turkish plans to send ministers to the Netherlands to campaign, he insisted it was his pressure which made the difference.

“Great! Thanks to heavy PVV- pressure a few days before the Dutch elections our government did NOT allow the Turkish minister to land here!!,” he said in a Twitter message, referring to his Party for Freedom. He later added “I am tell all Turks in the Netherlands that agree with Erdogan: GO to Turkey and NEVER come back!!”

The Dutch government said it does not object to meetings in the Netherlands to give information about the Turkish referendum, “but these meetings should not add to tensions in our society and everybody who wants to organize a meeting must adhere to instructions from authorities so that public order and security can be guaranteed.”

It said the Turkish government “does not want to respect the rules in this matter.”