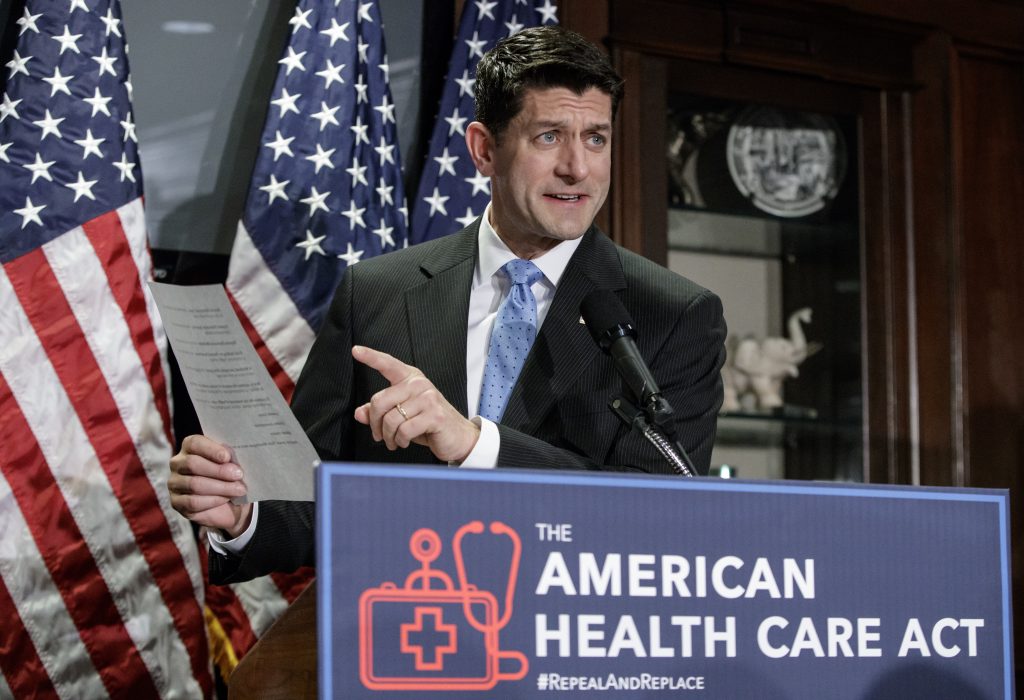 Speaker Paul Ryan staunchly defended the House Republican health care plan Wednesday as the only alternative to the current Obama-era law, as he confronted forceful opposition from conservatives, medical professionals and others.

“This is the choice we face. Are we going to stay with Obamacare … or are we going to do what we said we would do,” Mr. Ryan said at a Capitol Hill news conference after a private GOP meeting in which he tried to rally support.

Shortly after Mr. Ryan’s comments, two committees — Ways and Means and Energy and Commerce — kicked off what are expected to be marathon sessions to finalize the legislation that would scrap major parts of Barack Obama’s health overhaul while also fundamentally restructuring Medicaid for low-income people.

Mr. Ryan cast the task for the GOP as fulfilling seven years of promises to “repeal and replace” with a “conservative wish list”, scaling back the role of government in health care, cutting money for Planned Parenthood and overhauling mandatory programs.

“Most importantly, we get Washington out of the business of being a nanny state,” he said.

President Donald Trump and Vice President Mike Pence back the House plan, and Mr. Ryan is confidently predicting it will win passage. Behind closed doors on Wednesday, Mr. Ryan pointedly told fellow lawmakers that the president is all-in and suggested they should fall in line.

“He is creating some urgency that it’s time to get on board, and the time is now,” said Rep. Mark Walker of North Carolina, leader of the influential conservative Republican Study Committee. Walker had expressed opposition to an earlier draft of the bill but said Wednesday that it’s “trending in the right direction,” a positive sign for leadership.

Yet a significant contingent of House conservatives still weren’t sold, complaining the GOP’s new system of refundable tax credits would be a costly new entitlement.

Rep. Justin Amash of Michigan complained, “The leadership message is take it or leave it.”

Some fellow Republicans were losing patience with the conservative complaints.

Major conservative groups also oppose the bill, as do several GOP governors. The American Medical Association said Wednesday that the bill “would result in millions of Americans losing coverage and benefits,” while making coverage “more expensive — if not out of reach — for poor and sick Americans.”

AARP said the bill would “dramatically increase” health care costs for people age 50 to 64, and put the health care of millions at risk. The organization, which has nearly 38 million members, was pivotal to the passage of Obama’s law in 2010.

But the U.S. Chamber of Commerce sent congressional leaders a letter in praise of the plan, calling it “absolutely critical in taking steps to restore choice, flexibility and innovation to the nation’s health care markets.”

At a White House meeting Tuesday, Mr. Trump made clear to House Republicans that he would be personally engaging with individual lawmakers who oppose the bill as the party’s leadership tries to round up votes, according to a lawmaker present who spoke on condition of anonymity to discuss the private gathering.

Not long after, Mr. Trump appeared to be making good on his promise, tweeting at Sen. Rand Paul, R-Ky., who has criticized the bill.

“I feel sure that my friend @RandPaul will come along with the new and great health care program because he knows Obamacare is a disaster!” Mr. Trump wrote.

He plans to reconvene the group next week and was to meet with conservative leaders Wednesday to discuss the issue.

Republicans are pushing forward even without official estimates from the Congressional Budget Office on the cost of the bill and how many people would be covered, although GOP lawmakers acknowledge they can’t hope to match the 20 million people covered under the health law.

“This morning, we will answer President Trump’s call to action and we will send a clear message to all who are hurting” because of Obama’s law, said Ways and Means Chairman Kevin Brady, R-Texas, as his panel began its work. “That message is, relief is on the way.”

“The bill sabotages the marketplaces where close to ten million Americans today get coverage and starts a death spiral from which we will never recover,” said the committee’s top Democrat, Rep. Richard Neal of Massachusetts. He also said the plan “slashes Medicaid funding to pay for tax cuts that benefit the rich.”

Aiming to reduce the role of government in health care, the GOP plan would repeal unpopular fines that Obama’s law imposes on people who don’t carry health insurance. It would replace income-based subsidies, which the law provides to help millions of people pay premiums, with age-based tax credits that may be skimpier for people with low incomes. Those payments would phase out for higher-earning people.

The Republican legislation would limit future federal money for Medicaid, which covers low-income people. It would loosen rules that Obama’s law imposed for health plans directly purchased by individuals, but Democrats say the bill would hand tax cuts to the rich while leaving many people uninsured and shifting costs to states and hospital systems that act as providers of last resort.