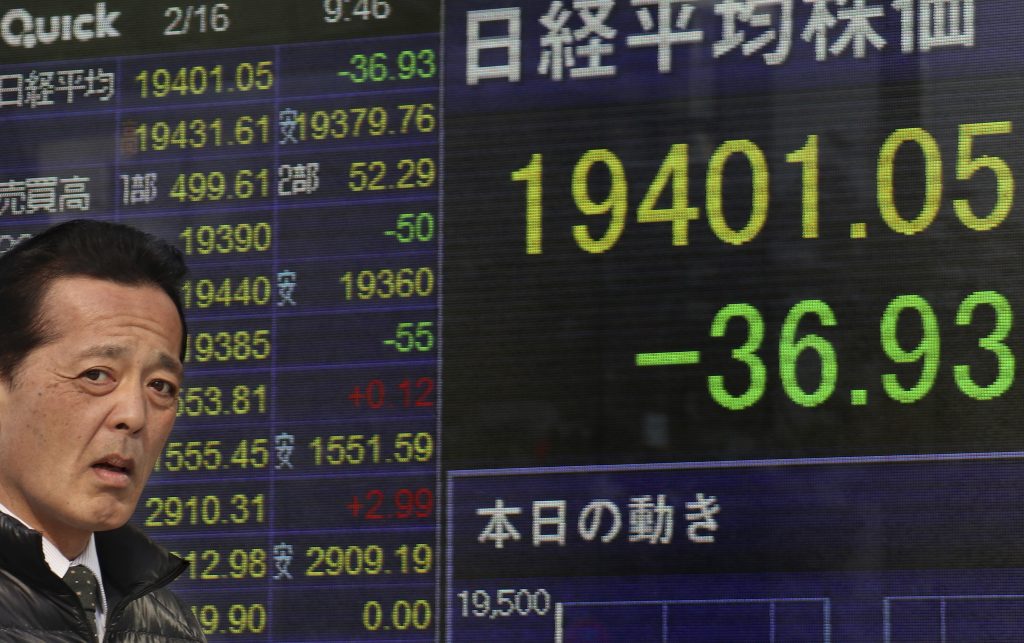 U.S. stock futures pared gains on Wednesday on disappointment that President Donald Trump did not offer further details on his plans for infrastructure spending and tax reforms, but the dollar firmed on growing expectations of a rate hike this month.

European stock markets were poised for a positive start, with financial spreadbetters expecting Britain’s FTSE 100 and Germany’s DAX to open 0.2 percent higher, and France’s CAC 40 to start the day up 0.3 percent.

President Trump pledged to overhaul the immigration system, improve jobs and wages for Americans, and promised “massive” tax relief to the middle class and tax cuts for companies, but offered few clues on how they would be achieved.

“Investors had little to grasp, and market reaction during the speech was choppy and directionless,” market strategists Paul Christopher, Scott Wren and Sameer Samana at Wells Fargo Investment Institute in St. Louis said.

“The speech was short on details and did not even prioritize the president’s goals.”

“With Congress getting bogged down by Republican infighting over efforts to repeal and replace existing health care legislation, it will take considerably longer to pass tax reform than we initially thought on election night,” Ashworth said in a note. “There is now a good chance that it won’t happen until early next year.”

U.S. stock futures still pointed to a higher open after President Trump’s address, though gains shrank as the speech progressed.

E-mini S&P futures edged up 0.2 percent, after the Dow Jones Industrial Average snapped a 12-day winning streak to close down 0.1 percent in the prior session.

The dollar index, which tracks the greenback against a basket of trade-weighted peers, advanced 0.5 percent to 101.58 after wobbling during the speech.

The U.S. currency also rebounded against the yen, rising more than 0.6 percent to 113.47 yen, after erasing its session gains during President Trump’s speech.

Reaction in Asian stock markets to President Trump’s speech was largely muted, with the MSCI’s broadest index of Asia-Pacific shares outside Japan down about 0.2 percent.

A raft of surveys pointing to stronger factory activity in China, Japan and other parts of the region were largely overshadowed by President Trump’s speech.

“The market has been looking for reassurance that Trump intends to follow through on his campaign promises for fiscal spending, tax cuts and deregulation,” said James Woods, global investment analyst at Rivkin in Sydney.

“He mentioned these policies but did not provide any actual details or timelines, which is what investors are looking for. However, in particular I think his rhetoric has been toned down around protectionism when mentioning China and Mexico, easing concerns around trade wars.”

Markets took note of that shift, with the Mexican peso trading higher after President Trump’s speech, although it inched lower later in the session. While still pledging to build a wall on the U.S.’s border with Mexico, President Trump made no mention of his earlier promises to make the latter pay for it.

Japan’s Nikkei extended gains to close up 1.4 percent, buoyed by a weaker yen and data showing manufacturing activity expanded in February at the fastest pace in almost three years.

Australian shares narrowed earlier losses to end the day 0.1 percent lower and the Australian dollar edged up 0.1 percent to $0.7666 after stronger-than-expected GDP data showed the economy had returned to growth in the fourth quarter.

Treasury yields, which had jumped after Fed officials suggested an interest rate rise might be delivered later this month, hovered slightly below that level after President Trump’s speech.

U.S. two-year Treasury yields were at 1.2961 after President Trump’s speech, after touching 1.304, their highest level since Dec. 15, earlier in the session.

New York Fed President William Dudley, among the most influential U.S. central bankers, said overnight on CNN that the case for tightening monetary policy “has become a lot more compelling” since Trump’s election.

Traders now see a better than 62 percent chance of a rate increase in March, a surge from 31 percent earlier, according to CME Group’s FedWatch tool.

The stronger dollar weighed on gold, which dropped 0.3 percent to $1,244.36 an ounce, extending Tuesday’s 0.3 percent decline.