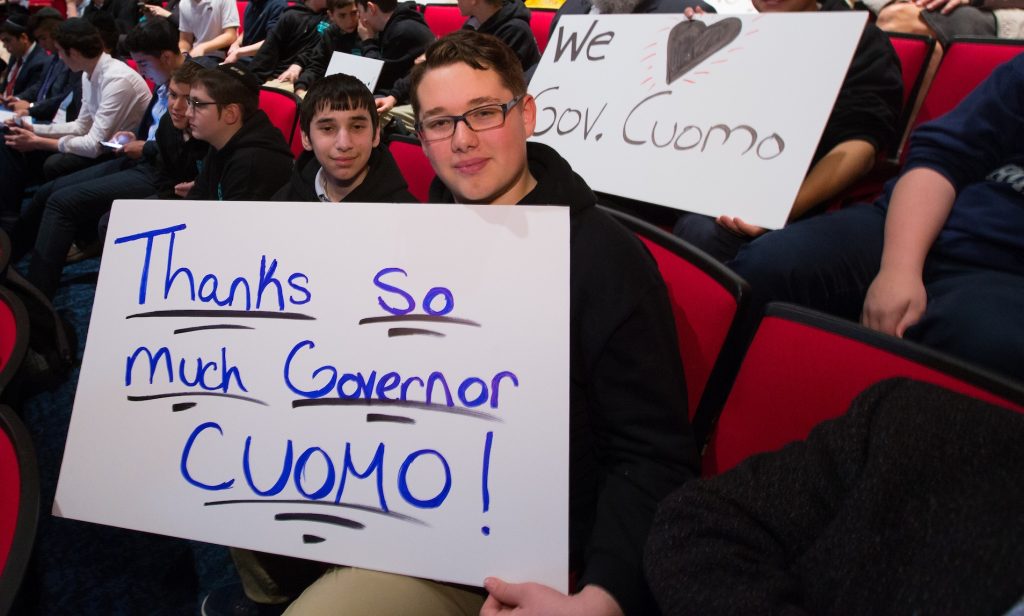 Addressing a boisterous crowd of hundreds of yeshivah students in Albany for the day, Gov. Andrew Cuomo on Wednesday articulated a new argument for state aid to tuition payers in New York — it helps support the public school system.

Addressing an Orthodox Union student rally at The Egg, a performing arts venue, the Democrat asserted that if the state’s 400,000 religious school students were to transfer to public schools it would collapse the system.

Gov. Cuomo has in the past framed his support for helping private school parents as a matter of “justice,” since parents have a right to choose how to educate their children. That argument, however, has come under an onslaught of attacks by the state’s powerful teachers’ unions, who accuse school choice supporters of raiding the public school cashbox to fund private schools.

The Democratic-led Assembly has been receptive to that reasoning, basically vetoing most funding to private schools.

The governor’s latest approach appears aimed at that attack line. The Senate has for the past few years backed tuition aid for private schools in their annual budget proposals and Gov. Cuomo has supported it. But he did not include it in this year’s budget, due at the end of the month.

Gov. Cuomo’s aides have told Hamodia that he plans on making a push for tuition aid after the budget passes. Some Assembly Democrats have backed a limited tuition aid program, in which money would go directly to parents rather than to the school.