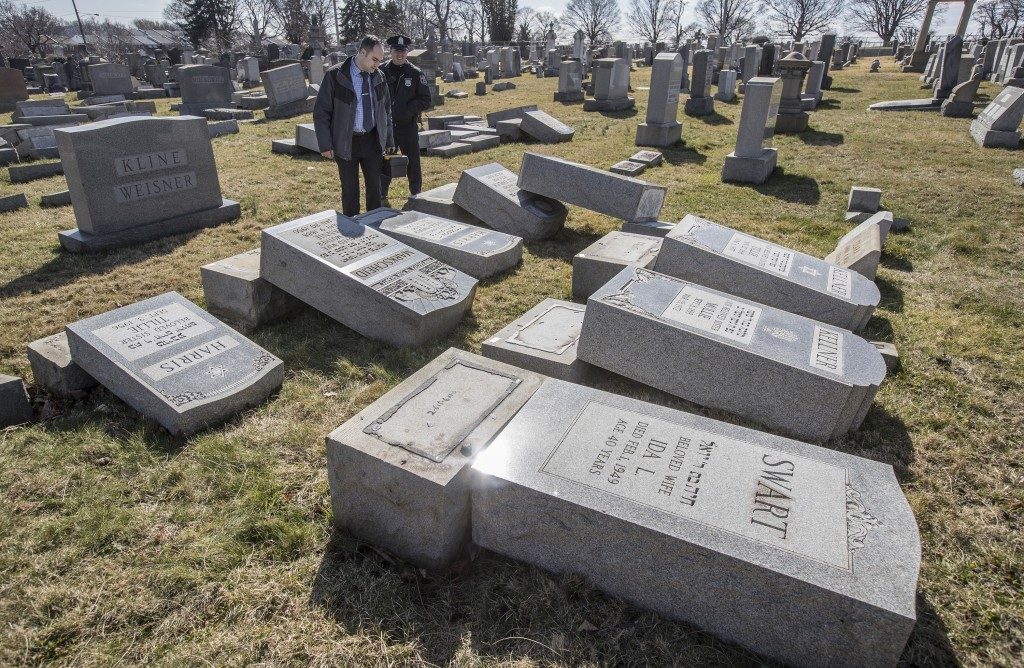 For the second time in a week, word that a Jewish cemetery in a major U.S. city has been vandalized sent shockwaves across the country. Days after Vice President Pence visited the cemetery in St. Louis, Missouri, where 150 graves were desecrated, a visitor from New Jersey who made the trip to daven at his father’s kever in Philadelphia discovered that the matzeivos of three of his relatives had been overturned by hoodlums. He soon realized that numerous other graves had been vandalized as well and promptly summoned police, who found that close to 100 kevarim had been desecrated.

Authorities in St. Louis and Philadelphia are still searching for the culprits, as expressions of outrage from elected officials and laymen continue to pour in.

The condemnations are important, as are calls for increasing security at Jewish sites, including cemeteries. A bill introduced by State Senator Simcha Felder, which recently passed the New York State Senate, calls for the criminalization of inflicting even minor damage in cemeteries and an increase in penalties for committing this crime. This is another praiseworthy step in dealing with this crisis.

For many, the natural response to such disturbing news is to focus exclusively on denouncing what has occurred, and underscoring the responsibilities of governmental authorities to deal with acts of anti-Semitism on both national and local levels. While this approach is tempting — as it requires precious little effort on our part when we limit our reaction to expressing our anguish and telling others what to do — it is misguided.

First and foremost, overt acts of anti-Semitism should also serve as wake-up calls, and lead us to introspection and thoughts of self-improvement. As Torah Jews, we must consider what message Hashem wants us to glean, both as individuals and as a community, from these acts of vandalism.

Secondly, while the desecration caused by anti-Semitic hoodlums is far more likely to make headlines, it is not the most serious threat facing batei chaim.

In 1960, the media reported that swastikas and various references to terms associated with Nazis had been found on dozens of headstones in Baron Hirsch Cemetery on Staten Island. In response to this and several similar acts, then-President Dwight Eisenhower released a blistering statement.

“We deeply regret that the fire of bigotry seems to be ever present in the body politic,” President Eisenhower wrote. “We cannot ignore it, nor can we allow it to spread one inch. For, when it becomes rampant, it may cause destruction to freedom and decency everywhere.”

Nearly six decades later, the Baron Hirsch cemetery is so overgrown that it took one recent visitor, using the exact coordinates of a relative’s grave, more than an hour to find it.

“It was like trying to walk through a forest with some matzeivos in it. Even some of the gates have collapsed. I felt like I was in an archeological study.”

According to Baruch Amsel, founder of the Institute for Judaic Culture and History, which researches kivrei tzaddikim in America, several local cemeteries are in dreadful shape.

“Some are beautifully maintained, others are a mess,” he told Hamodia. He cited the condition of Grove Street cemetery in Newark, N.J., in which some 10,000 Jews are believed to be buried, as being particularly disastrous — and downright dangerous. Other than the one day a year during Aseres Yemei Teshuvah — dubbed “Cemetery Day” — when the police are out in force, visitors are actually warned against even trying to enter the grounds.

At a time when the condition of Jewish cemeteries and the vital importance of showing proper respect for niftarim is being widely discussed, we should take this opportunity to raise awareness and take action over the fact that so many kevarim are in a terrible state of neglect.

In many situations, the niftarim have great-grandchildren or grand-nephews and -nieces living within driving distance, yet it never occurred to these descendants to try to locate the grave of a relative they never knew and only heard vaguely about.

In some cases, all it takes is a trip to the kever and then applying some pressure on the cemetery caretakers. In others, with the landsmanshaft that originally owned the plot no longer in existence and no funds put away for regular maintenance, funds have to be raised to clean up the site. It all begins with some research and concrete actions.

In recent years, the possibility of locating and restoring a kever of an ancestor buried in prewar Europe is becoming increasingly more feasible. While in many cities, especially in Eastern Europe, the cemeteries were totally destroyed, in other cities, gravestones still stand — although they are often terribly overgrown by the surrounding vegetation and in constant danger of being vandalized, as well as damaged by the elements.

We owe it to the niftarim — and to ourselves — to do all we can to try to protect their final resting places. Mere words will never suffice for us to fulfill our obligations.