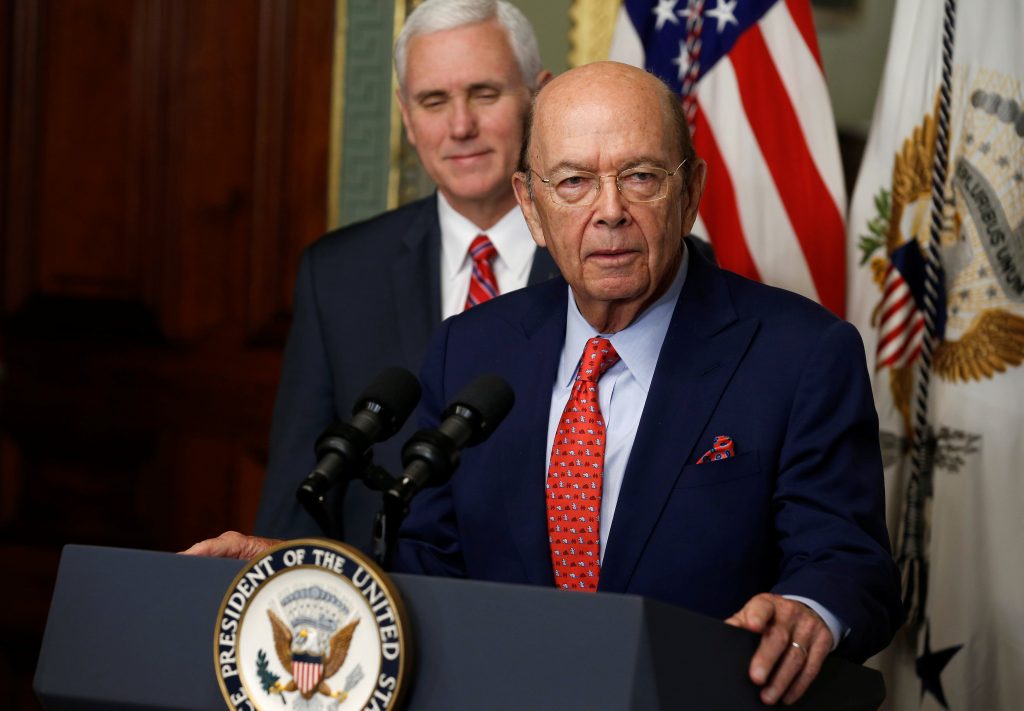 The Senate on Monday confirmed Wilbur Ross as commerce secretary, by a vote of 72-27. Ross was sworn in on Tuesday morning.

Vice President Mike Pence administered the oath of office to the 79-year-old billionaire. After he was sworn in, Ross said he welcomed the Democratic support and that the vote suggested that “perhaps, finally building America up again may become a bipartisan thing.”

Senators from both political parties were deferential to Ross at his nearly four-hour confirmation hearing, which was much more subdued than the confirmation hearings of other Trump nominees. Former commerce secretaries have praised him, including one who served under former President Barack Obama.

“Mr. Ross will bring decades of business, entrepreneurial and civic experience to this important position,” said Sen. John Thune, R-S.D., chairman of the Commerce Committee. “I believe his extensive management experience in the private sector, and his understanding of the challenges faced by workers and businesses alike, will equip him well for the job of leading the Department of Commerce.”

Sen. Elizabeth Warren of Massachusetts criticized Ross’ business ties to Russia and the way he ran a mortgage lender during the housing crisis.

“Mr. Ross has extensive ties to Russia. He plans to keep making money from his major oil shipping companies while working as Commerce Secretary. He’s made billions off the backs of struggling home owners,” Warren said on Monday. “He is practically a cartoon stereotype of a Wall Street fat cat.”

As part of his ethics agreement, Ross is giving up his position at Diamond S. Shipping, but he will retain a stake in the company, which ships petroleum and other products. Also as part of the agreement, Ross will not take any action as commerce secretary that would benefit any company in which he has a financial interest.

At his confirmation hearing, Ross was not asked about business ties to Russia or his work as a mortgage lender; and he did not address the issues.

Senators did note that Ross is divesting from much of his business empire.

Worth an estimated $2.9 billion, Ross has extensive business ties around the globe. In 2000, he founded WL Ross & Co., a private equity firm. As part of his ethics agreement, Ross will divest from the firm.

So far, the Senate has confirmed 15 out of 22 Trump Cabinet or Cabinet-level picks requiring confirmation. Senators also moved forward Monday on President Trump’s nomination of Montana Rep. Ryan Zinke to lead the Interior Department, voting 67-31 to limit debate. A final vote on confirmation could occur on Tuesday or Wednesday.

During the presidential campaign, President Trump criticized U.S. trade deals, including NAFTA. Trump’s stance on trade is at odds with many Republicans in Congress, but it endeared him to some voters in the Midwest who believe trade deals cost American jobs.

NAFTA was negotiated and signed by President Bill Clinton, with broad support among Republicans in Congress.

Ross said all free trade agreements should be systematically re-opened every few years to make sure they are working in the best interests of the U.S.

Ross said he is pro-free trade but noted his close relationship with the United Steelworkers union as proof that he will fight to protect American jobs. The union has endorsed him.

The commerce secretary has several roles in promoting American business interests in the U.S. and abroad. The department handles trade issues, working to attract foreign investment to the U.S. The department also oversees agencies that manage fisheries, weather forecasting and the Census Bureau, which will conduct a count in 2020.

Ross said he has experience at that agency; he was a census-taker while he attended business school.