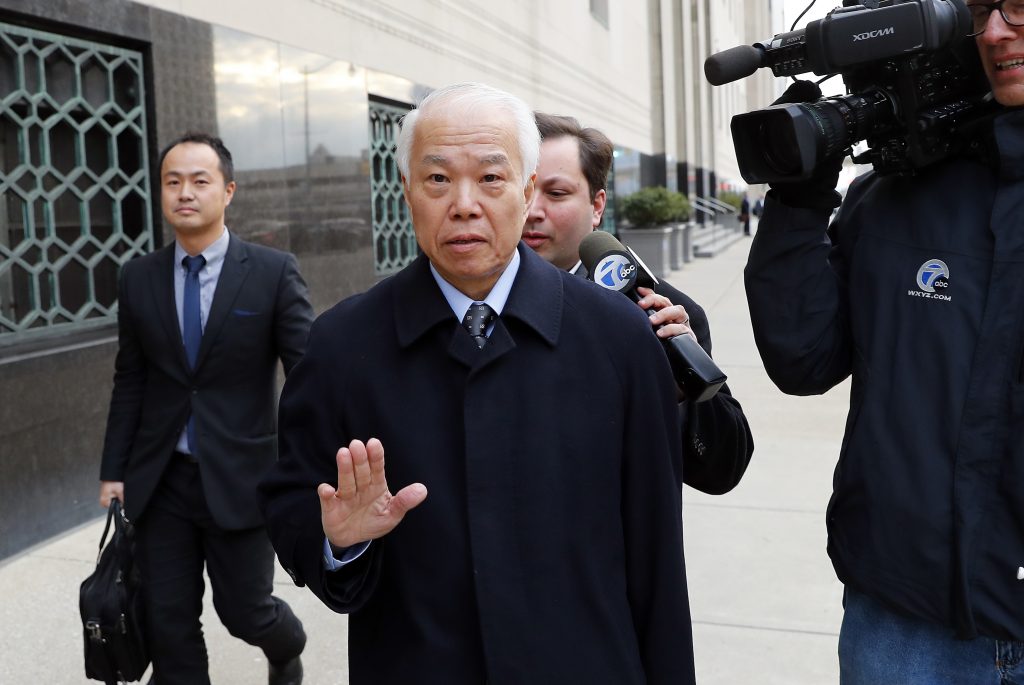 Japanese auto-parts maker Takata Corp. pleaded guilty to fraud Monday and agreed to pay $1 billion in penalties for concealing a deadly air-bag defect blamed for at least 16 deaths, most of them in the U.S.

The scandal, meanwhile, seemed to grow wider when plaintiffs’ attorneys charged that five major automakers knew the devices were dangerous but continued to use them for years to save money.

In pleading guilty, Takata admitted hiding evidence that millions of its air-bag inflators can explode with too much force, hurling lethal shrapnel into drivers and passengers.

The inflators are blamed for 11 deaths in the U.S. alone and more than 180 injuries worldwide. The problem touched off the biggest recall in U.S. automotive history, involving 42 million vehicles and up to 69 million inflators.

The company’s chief financial officer, Yoichiro Nomura, entered the guilty plea on Takata’s behalf in federal court in Detroit. He also agreed that Takata will be sold or merge with another company.

The penalties include $850 million in restitution to automakers, $125 million for victims and families and a $25 million criminal fine.

Takata’s inflators use ammonium nitrate to create a small explosion that inflates air bags in a crash. But when exposed to prolonged high temperatures and humidity, the chemical can deteriorate and burn too fast. That can blow apart a metal canister.

In the U.S., 19 automakers are recalling the inflators. Worldwide, the total number of inflators being recalled is over 100 million.

Takata’s penalty is small compared with the one imposed on Volkswagen, which must buy back cars and pay up to $21 billion in penalties and compensation to owners over its emissions-cheating scandal.

Karl Brauer, executive publisher of Kelley Blue Book, said authorities may have kept the penalty manageable so Takata could stay in business and continue to carry out the giant recall.

“My sense is there has been more kid-gloves treatment of Tataka simply because destroying them makes the problem much worse,” Brauer said.

Takata, which also makes seatbelts, has racked up two straight years of losses over the recalls but said it hopes to start turning a profit again this fiscal year.

Meanwhile, plaintiffs in dozens of lawsuits over the defect charged in court papers filed Monday in Miami that Honda, Toyota, Nissan, Ford and BMW had independent knowledge that Takata’s air bags were unsafe before putting them in millions of vehicles.

After an inflator ruptured in 2009, one of the auto companies described the problem as “one in which a passenger protection device was transformed into a killing weapon,” the court filing said. The company was not identified in the document.

The filing marks the broadest allegation yet that automakers knowingly put their customers in danger.

“The automotive defendants were aware that rupture after rupture, both during testing and in the field, confirmed how dangerous and defective Takata’s air bags were,” the plaintiffs’ attorneys said.

The auto companies have asserted that they were deceived by Takata and shouldn’t be held liable.

In fact, in Takata’s plea agreement, the Justice Department says Takata got the car companies to keep buying its inflators “through submission of false and fraudulent reports and other information that concealed the true and accurate test results.”

The plaintiffs are suing not only over the deaths and injuries but over what they say is the vehicles’ loss in value because of the defect.

The filing Monday includes specific allegations against each of the automakers:

– Honda, Takata’s biggest customer, was intimately involved in designing Takata inflators, and two of them exploded and ruptured at Honda facilities in 1999 and 2000.

– Toyota had quality concerns about Takata in 2003, the same year an inflator ruptured at a Toyota testing facility. At least 15 inflators in Toyotas had blown apart by 2014.

– Ford picked Takata inflators over the objections of its own inflator expert because Takata was apparently the only company that could provide the number Ford needed, the lawyers wrote. One document said Ford had a “gun to its head, so it had to accept ammonium nitrate.”

– Nissan switched to Takata inflators “primarily, if not solely” to save about $4 per inflator. Another automaker told Nissan about the risky inflators in 2006.

– BMW went to Takata seeking cost savings. As early as 2003, a Takata inflator ruptured in a BMW in Switzerland.

BMW, Nissan and Toyota declined to comment. Honda said it was preparing a statement. Ford did not immediately respond to a message for comment.