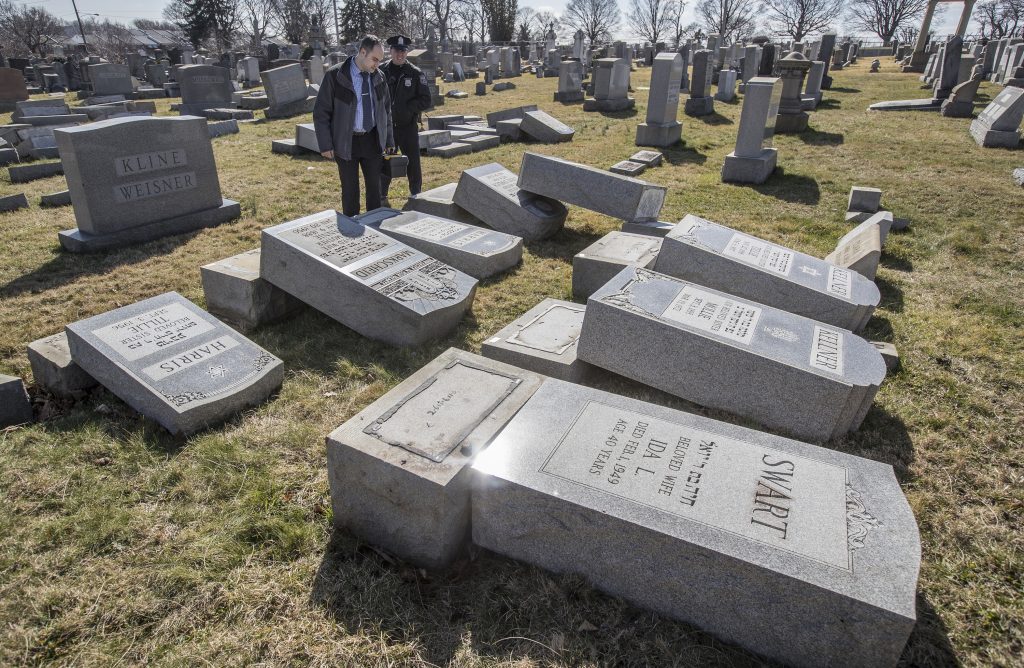 Against the backdrop of an increasing number of anti-Semitic incidents nationwide, observers were shocked to find scores of headstones toppled at a Jewish cemetery in Philadelphia.

Aaron Mallin of Bergenfield, New Jersey, was visiting Mt. Carmel cemetery, in the Wissoming section of the city, on Sunday morning for the occasion of his father’s yahrtzeit, when he made the troubling discovery.

“It’s shocking and very disturbing, especially for the families who have loved ones buried there,” he told Hamodia. “I’ve been coming here for 30 years and I’ve never seen anything like this.”

Upon seeing the widespread desecration, Mr. Mallin scanned other areas of the large cemetery and discovered more and more tipped-over headstones. He was the first to report the vandalism to the police, who sent an officer to the scene within about 20 minutes. Subsequently, a team of detectives arrived to make a fuller investigation.

“When I first came in, I saw one tombstone knocked over and then noticed more and more. I immediately thought of the news in St. Louis last week and said, oh no, the exact same thing happened here now,” said Mr. Mallin, referring to last weekend’s desecration of more than 150 graves at a Jewish cemetery in Missouri.

Although the headstone of Mr. Mallin’s father was left intact, the headstones of his great-grandparents and an aunt were knocked over. He was able to lift his aunt’s stone back into place with some difficulty (she died in infancy and had a small grave marker), but could not raise the others. He said that some of the older and more fragile stones had cracked as a result of the vandalism.

“It had to be at least two people who did this, and if it was only two, it must have taken them hours to tip over so many,” he said. “I didn’t see any graffiti or beer bottles; it was actually very clean. It didn’t look like this was just the work of a few drunk kids.”

Philadelphia police told Hamodia that approximately 100 graves were damaged and that the incident appears to have occurred after nightfall on Saturday night.

Incidents of hate speech and vandalism targeting Jews in the United States have been on the rise for the last two years, but have significantly increased in recent months. President Donald Trump forcefully condemned the trend on Tuesday. On Wednesday, Vice President Mike Pence visited the site in a show of sympathy and to encourage a team of volunteers who were working to restore the damaged graves. The administration has yet to announce any plans to address the issue.

Authorities have not made any arrests or announced any leads either in Missouri or in Philadelphia.

The Philadelphia police announced that the Mizel Family Foundation and the Anti-Defamation League are offering a $10,000 reward for information leading to the arrest.