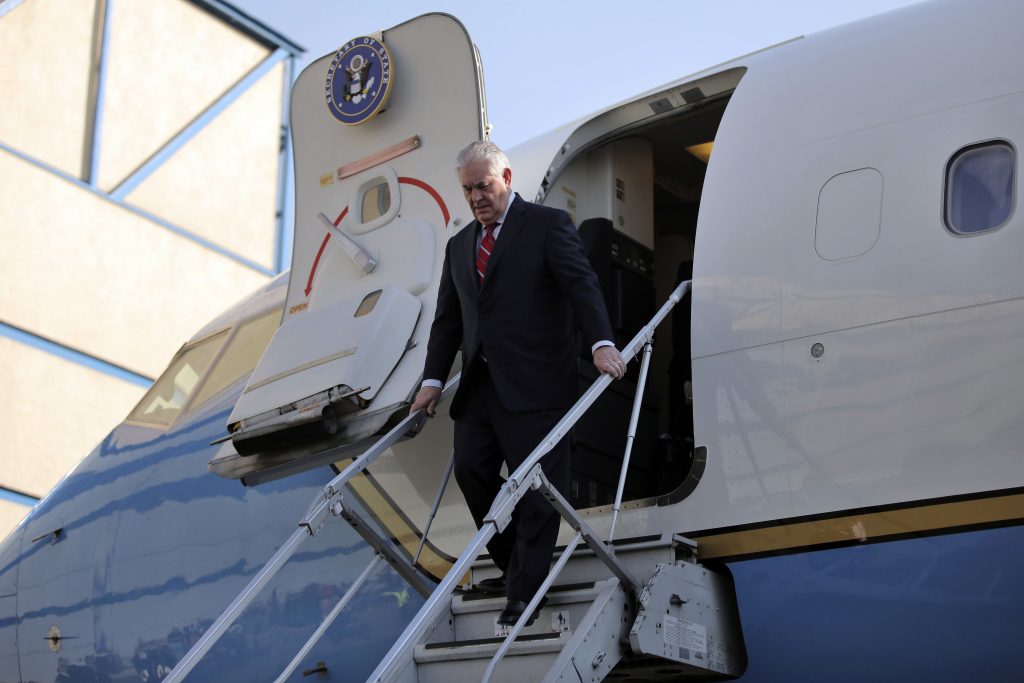 Mexico’s mounting unease and resentment over President Donald Trump’s immigration crackdown are looming over a gathering of U.S. and Mexican leaders that the U.S. had hoped would project a strong future for relations between the neighbors.

There is no shortage of tension points as U.S. Secretary of State Rex Tillerson and Homeland Security Secretary John Kelly meet Thursday with top Mexican officials. After all, it’s Kelly who’s tasked with executing President Trump’s plan to target millions for possible deportation, and Tillerson who must explain it to the rest of the world.

As the pair arrived in Mexico City, the two countries seemed much farther apart than their close geographical proximity would suggest.

“I think Secretary Tillerson and Secretary Kelly are going to have a great discussion down there,” said White House press secretary Sean Spicer. He called the relationship “phenomenal.”

But while Spicer said the officials would “talk through the implementation of the executive order,” Mexico made clear it intended to do nothing of the sort.

“I want to say clearly and most emphatically that the Mexican government and the Mexican people have no reason to accept unilateral decisions imposed by one government on another,” said Mexico’s foreign relations secretary, Luis Videgaray. “We are not going to accept that, because we don’t have to.”

Videgaray added a cryptic but pointed warning that Mexico wouldn’t hesitate to challenge the U.S. move at the United Nations or other global venues.

The visiting Americans planned to meet Thursday with Videgaray before a working lunch with Mexican officials and a formal meeting with Mexican President Enrique Pena Nieto.

The worsening rift over deportations and illegal immigration adds to an array of disputes that have sent U.S.-Mexico relations plunging since President Trump took office. President Trump’s insistence that Mexico pay billions for a border wall led Pena Nieto to cancel a planned Washington visit. Mexican officials are also apprehensive over President Trump’s pledge to overhaul the trade relationship and possible apply steep taxes to Mexican products, a move with profound impacts for Mexico’s export-heavy economy.

New immigration enforcement memos signed by Kelly this week call for sending send some immigrants who have crossed the U.S.-Mexico border illegally back into Mexico — even those from third countries who have no connection to Mexico. The memos also prioritize deportation for anyone charged or convicted of any crime, rather than just serious crimes, potentially subjecting millions in the U.S. illegally to deportation, including many Mexicans.

Those policies have raised fears in Mexico about the possibility of deportee and refugee camps emerging along Mexico’s northern border. Mexican officials are also likely to seek answers about whether a forthcoming report ordered by Trump’s administration that will list all current U.S. aid to Mexico is intended to threaten Mexico into compliance over immigration or the wall.

“We urge you to use your visit to disavow vitriolic rhetoric and forge a strong partnership based on mutual respect with the government of Mexico,” the senators wrote in an open letter to be released Thursday.

Kelly arrived in the Mexican capital from Guatemala on a visit intended to deter Guatemalans from trying to enter the U.S. illegally. Though Kelly promised “there will be no mass roundups,” he acknowledged that those caught will be removed from the U.S. much more quickly than in the past.