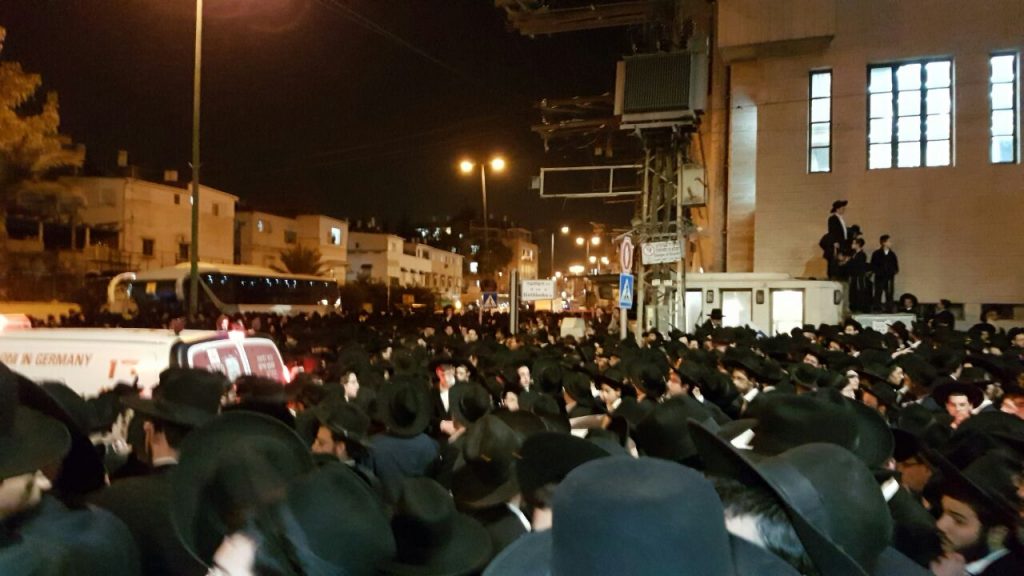 The Torah world was plunged into mourning Thursday with the news of the petirah of Hagaon Harav Yaakov Edelstein, zt”l, Rav of Ramat Hasharon, at the age of 93.

Harav Edelstein, who was hospitalized several times over the last year, was niftar in the Laniado hospital in Kiryat Sanz, Netanya.

Masses attended the levayah, which began Thursday afternoon, from Kiryat Sanz in Netanya, where the Sanzer Rebbe, shlita, delivered a tearful hesped.

The levayah continued to the basi medrash of the niftar Bnei Brak, where his son Harav Mordechai shlita and his brother Hagaon Harav Gershon Edelestein shlita, and Hagaon Harav Baruch Dov Povarsky, shlita, Roshei Yeshivah of Ponevezh, were maspid.

From there the levaya continued to Ramat Hasharon, where the Rav was brought to kevurah.

Harav Yaakov Edelstein was born in 5684/1924 in Sumiac, Slovakia, a year after his older brother, ybl”c, Hagaon Harav Gershon, who is Rosh Yeshivah in Yeshivas Ponovez. Their parents were Harav Zvi Yehudah, Rav of the town, and Miriam Edelstein, the daughter of Harav Mordechai Shlomo Movshowitz.

He learned in the local cheder until the family moved to Eretz Yisrael and settled in Ramat Hasharon.

With the establishment of Yeshivas Ponovez in Bnei Brak in 1944/5704, Rav Yaakov and his older brother were in the first group of seven bachurim to learn in the yeshivah.

After Rav Zvi Yehudah’s petirah in 5710/1950, the community asked his son Rav Yaakov Edelstein, who was then 26 years old and engaged to be married, to accept the post. They were acquainted with Rav Yaakov from the times of his father, and were impressed by his Torah knowledge and friendly manner.

After receiving the brachah of the Chazon Ish, Rav Yaakov accepted the post. He opened the town’s first kollel over 40 years ago near his home, and since then has opened another kollel, while the baalei teshuvah in the city have established another two kollelim.

After being appointed Rav, Rav Yaakov opened a yeshivah in the city, Yeshivas Hasharon, together with his uncle Rav Binyamin Movshowitz, Rav of Herzliya, who was niftar just three weeks after its opening.

The yeshivah was founded with the backing of the Chazon Ish, who also gave the first donation for its establishment and participated in a public test of the bachurim. After the yeshivah closed around 30 years ago, Rav Yaakov was called to head Yeshivas Chug Chasam Sofer (Yeshivas Machaneh Avraham) and Yeshivas Sadigura, both in Bnei Brak.

Several years later he was also appointed Rav of Bnei Brak’s Neot Yosef neighborhood and Yeshivas Tiferes Moshe. He was also included in Hagaon Harav Nissim Karelitz’s beis din, and was renowned as one of the leading Dayanim in the Torah world, as well as being an authority in Halachah.

The Brisker Rav would send his son to Ramat Hasharon to consult with Rav Yaakov in hilchos shechitah and other halachos.

Ramat HaSharon, the heart of Israel’s “aristocracy,” merited a place on the chareidi map thanks to its Chief Rabbi, Harav Yaakov Edelstein.

“He is our leader, the leader of the entire community, without any barriers. Rav of Edelstein is the Rav of Ashkenazim and Sephardim alike,” he said.

Having served the town for over 60 years, the Rav gained respect from all the locals, both religious and secular. Being Chief Rabbi of the town, the Rav opened his doors to the entire town’s population, who discussed with him all their needs and sought his advice in all fields.

However, things changed around ten years ago, when the Rav’s greatness became public, and his home on Rechov Naomi 4 became an address for those who need yeshuos.

“The Rav became known as a baal mofes (a wonder doer) and tzaddik,” Rav Mualem noted. “However, the Rav gave preference to the locals waiting for an audience.”

“People came to him from across the country for his advice, segulos and brachos,” Rav Mualem continues, “especially those who haven’t found their zivug.”

The Rav was a close talmid of the tzaddik nistar Harav Moshe Yaakov Rabikof, known as the Sandlar (cobbler) of Tel Aviv, learning from him the secrets of Kabbalah.

He is also survived by many grandchildren and great-grandchildren, and thousands of talmidim and admirers across the world.