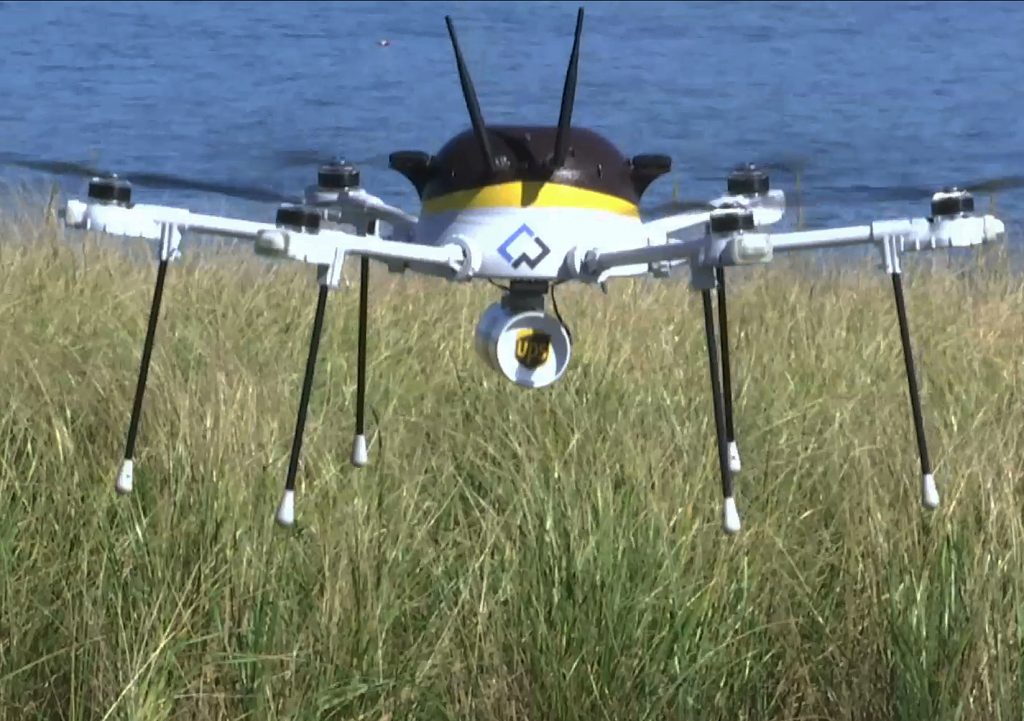 UPS has tested delivering a package to a home by drone from one of its brown trucks.

“We think drones can help us with some of our routine daily deliveries,” said UPS chief information officer Juan Perez during the company’s investor conference Tuesday. “I can imagine a day when we dispatch a fleet of autonomous cars. … Now imagine a day when these autonomous vehicles have a UPS delivery person on board” who delivers packages and deploys delivery drones, he said.

The test Monday used a delivery drone that docks on top of the truck, with a cage underneath it that goes through a hatch in the truck. The UPS driver uses the hatch to load the package onto the drone.

The drone can carry a package of up to 10 pounds and can fly autonomously for up to 30 minutes after the driver hits a button on a touch screen. The drone returns to the dock to recharge, and the driver can make other deliveries while the drone is away.

“The test is different than anything we’ve done with drones so far,” said UPS senior vice president of global engineering Mark Wallace in a written statement. “It has implications for future deliveries, especially in rural locations where our package cars often have to travel miles to make a single delivery.”

With 66,000 delivery drivers on the road daily, cutting one mile driven per drive per day over a year could save the company as much as $50 million, according to UPS.

Drivers will still be “the face of our company,” but drones could “aid drivers at various points along their routes, helping them save time,” Wallace added.

But the demonstration of the drone Monday showed that there are still some glitches in the technology, according to a TechCrunch report describing a possible interference issue that caused the drone to abort a flight and fall to the side during a demonstration.

UPS has done other drone tests, including a mock delivery of medicine in Beverly, Mass., last year. It also uses drones in warehouses to check inventory on high shelves and uses drones for humanitarian relief, delivering blood and vaccines in Rwanda.

But this week’s test “shows how drones might assist in making non-urgent residential deliveries as part of the day-to-day operation,” according to UPS.

The Federal Aviation Administration has authorized limited use of small drones for commercial purposes. UPS sits on a FAA drone advisory committee, which will provide recommendations on integrating drones into the national airspace.