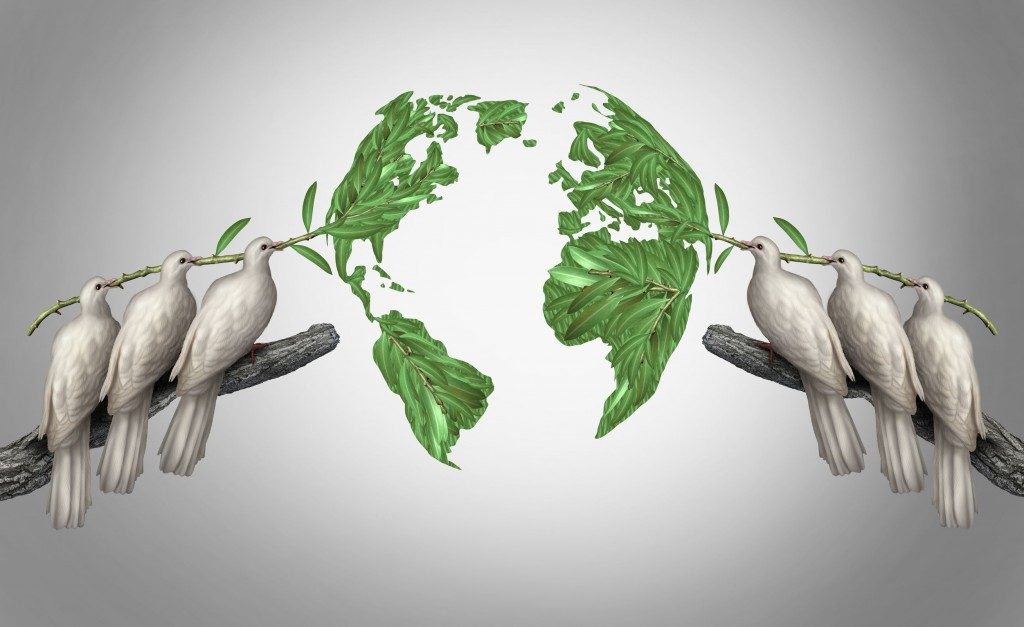 There are some things that everyone seems to have an opinion about — like the weather and the two-state solution.

There are people all around the world who don’t know the difference between Ramle and Ramallah, or that “democratic” elections haven’t been held in the Palestinian Authority since 2006, or that its economy wouldn’t survive a day without massive infusions of foreign aid, who are absolutely convinced that the two-state solution is the way to go in resolving the “conflict” with the Palestinians.

One of them is Singaporean Prime Minister Lee Hsien Loong who, on Monday, welcomed Israeli Prime Minister Binyamin Netanyahu on the first-ever official visit by an Israeli head of state to Singapore. At a joint press conference, Lee made it clear that, in his view, the two-state solution is the “only” way to achieve peace and stability.

He knows it’s tough to achieve, he conceded, but it is the only way. (Mr. Netanyahu must have been shocked to learn that even Singapore had an informed opinion on how to deal with the Palestinians.)

With all due respect for Singapore’s prime minister, a gracious host who has been reaching out to forge better ties with Israel, the two-state solution isn’t just tough to achieve. It’s impossible.

That’s because when even leaders in far-off Singapore accept the legitimacy of the Palestinians’ demand for a state, irrespective of facts on the ground, what reason is there for the Palestinians to compromise in a way that would give them control over their lives but not the ability to harm Israel?

The president’s words were a reality check for the Palestinians. For the first time in decades, they got the message that the United States is not sold on statehood as the only road to stability and prosperity for all the parties.

Equally important was President Trump’s message that it’s time for the Palestinians to stop looking to the international community to twist Israel’s arm in reaching an agreement. “The United States will encourage peace and really a great peace deal,” he said. “We will be working on it very, very diligently. But it is the parties themselves who must directly negotiate such an agreement.”

The response to the president’s remarks was, as expected, hysteria and a rush to embrace the same old, failed, thinking on the peace process. In Cairo, U.N. Secretary-General Antonio Guterres and Arab League Chief Ahmed Aboul-Gheit said they agreed that the two-state solution was “the only way to achieve comprehensive and just settlement to the Palestinian cause.”

A representative of the Palestinian Liberation Organization (PLO) threatened violence, saying that “the alternative to a two-state solution is painful bloodshed.” Hezbollah leader Hassan Nasrallah in Lebanon, who’s never been known as a great peacemaker, issued a statement that the president’s words were a “semi-official announcement of the death of the path of negotiations.”

The Israeli left warned of dire consequences. “Such a solution will lead us to a bi-national state, which would be a disaster for Israel,” Zionist Camp MK Tzipi Livni said. “If Trump forces us into that solution I will fight for a Jewish and democratic state.”

The danger of a bi-national state — where Palestinians are given the right to vote and MK Ahmed Tibi, Yasser Arafat’s former adviser, claims that he can win election as prime minister — is real. But more real is the danger that would be posed by an armed Palestinian state that has never stopped calling for Israel’s destruction.

If such a state were chalilah established, Israel would be neither democratic nor Jewish. It would be gone.

President Trump’s statement is a license to explore other ideas, including autonomy and a federation arrangement with Jordan that would give the Palestinians economic independence without posing a threat to Israel.

In the final analysis, it isn’t just President Trump who has stopped obsessing about Palestinian statehood and the “occupation.” The moderate Arab countries, including Saudi Arabia, the Gulf states, Jordan and Turkey, are for the first time openly acknowledging that Iran is the common enemy, not Israel.

Saudi Arabia joined Israel and Turkey at the Munich Security Conference a few days ago in calling Tehran the main sponsor of global terrorism and a destabilizing force in the Middle East and calling for the regime to be punished.

That’s encouraging. Now, if only Singapore could see the light.