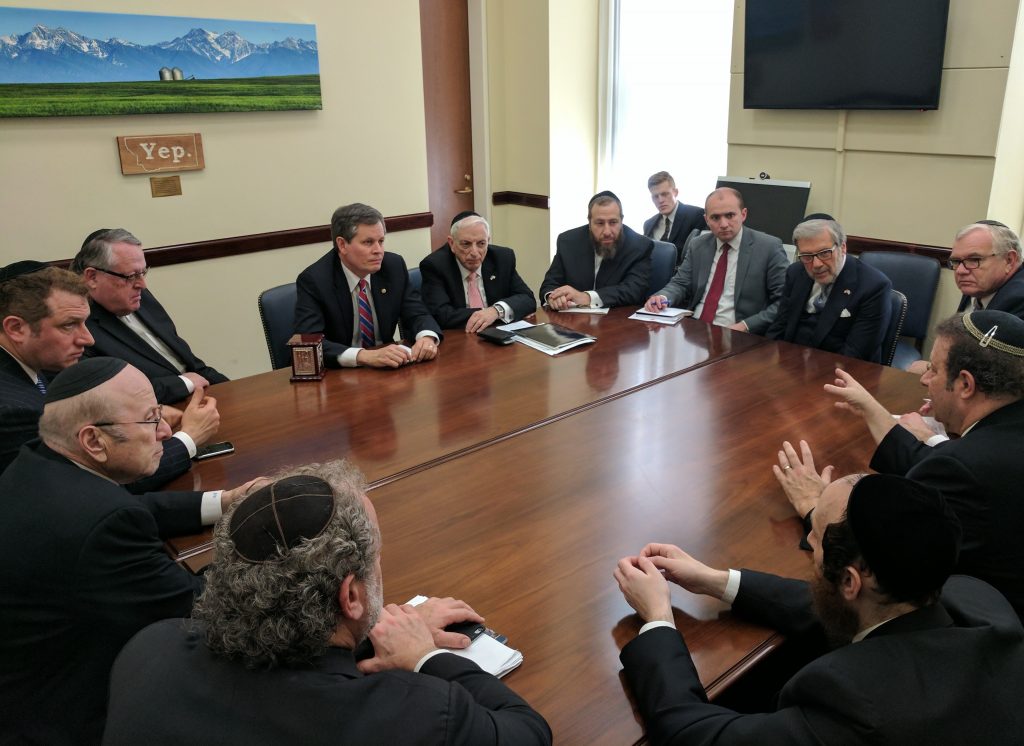 The U.S.-Israel Security Alliance, founded by Ezra Friedlander of The Friedlander Group Public Relations, is a group of Jewish American business leaders and political activists, which seeks to strengthen the U.S.-Israel security relationship.

The mission sought to shore up support for two bills proposed in the wake of U.N. Resolution 2334.

The first, a resolution known as S. Res. 6, was sponsored by Sen. Marco Rubio (R-Fla.) and Sen. Ben Cardin (D-Md.), and has a total of 78 co-sponsors. It condemns Resolution 2334 as well as “all efforts that undermine direct negotiations between Israel and the Palestinians for a secure and peaceful settlement.”

Most of the senators the Alliance visited Thursday are co-sponsors of one or both bills.

The Alliance sought to start “a very serious conversation about the United States and its funding priorities,” Ezra Friedlander told Hamodia.

Cruz noted that while the Obama administration abstained from the U.N. resolution, the new administration has indicated a much friendlier stance toward Israel.

“I believe we’re in a dramatically different position now,” Cruz told the Alliance. “When it comes to Israel, I’m encouraged by what I see. I’m encouraged by what appears to be a very positive meeting with [PM Netanyahu] and President Trump today, and I am hopeful that the campaign promise to move the embassy to Jerusalem will be followed-through … and certainly, you may rest assured that I am energetically urging that as frequently as possible.”

Sen. Orrin Hatch (R-Utah), who recently became the longest-serving Republican senator in history (passing the late Alaskan Ted Stevens), has long been known as one of the staunchest friends of Israel and the Jewish people in Washington.

Hatch — who has a mezuzah on every door on his home and office, and wears a mezuzah necklace — often proudly notes that he has “been a friend of every Israeli prime minister from Menachem Begin on down!”

A co-sponsor of both the Cruz and Rubio/Cardin bills, Hatch told the Alliance that he will discuss de-funding the U.N. with President Trump, noting, “He likes reversing Obama’s work. He takes particular joy in it. And I do, too!”

Sen. Hatch said that “Obama really fouled up the Middle East, as far as I am concerned.”

He called the abstention of Resolution 2334 “beyond the pale — the stupidest, dumbest thing I’ve ever seen in my life in the Middle East.”

“I haven’t gotten over it yet,” said Mr. Hatch. “There’s no excuse for it. It put Israel in a bind. It put our own country in a bind.”

Regarding the new administration, Sen. Hatch said, “It’s going to be interesting to see how Trump does.”

And, he urged the Alliance, “It’s very important that the [pro-Israel] community in this country stay firm.”

Despite their state having a minuscule Jewish population, both Sen. Hatch and Utah’s other senator, fellow Republican and Mormon Mike Lee, are strong friends of Israel and the Jewish community in America. Mr. Lee noted how the Mormons also have suffered religious persecution.

Sen. Bill Nelson (D-Fla.), a former astronaut who proudly told the visitors, “I carried a mezuzah with me when I flew in space!” co-sponsored the Rubio/Cardin bill but opposes the Cruz bill to cut off funding to the U.N.

Sen. Blumenthal was away on urgent business and therefore could not address the Alliance himself, but Katherine Bradbury, his legislative assistant, said that Sen. Blumenthal “does not support cutting funding for the U.N.”

Asked, “What measure would you use instead?” to overturn Resolution 2334, Bradbury replied.

“We’re still trying to figure that out,” but that the Trump Administration “is still giving mixed messages regarding approaches to foreign policy.”

Bradbury also noted, “We have high hopes that [U.S. Ambassador to the U.N. Nikki] Haley is going to be a strong pro-Israel voice.”

Sen. Steve Daines (R-Mont.), who co-sponsored both bills, spoke of the danger of possibly turning Yehudah and Shomron over to the Palestinians.

“Gaza illustrates for us what happens when you turn control back over, when the Israelis leave. That should indicate what will happen if Israel leaves the settlements.”

Other U.S. senators who met with the Alliance included: Al Franken (D-Minn.); Luther Strange (R-Ala.), who recently replaced former senator and current Attorney General Jeff Sessions; Ron Johnson (R-Wisc.), who has a flag from the Shomron in his office, which he acquired on one of his many visits to Israel; Tim Scott (R-S.C.); Maggie Hassan (D-N.H.); Joni Ernst (R-Iowa); Bill Cassidy (R-La.); and Roy Blunt (R-Mo.), who proudly noted that he works in the same office as former Missouri senator and vice president, and later president, Harry Truman, supporter of the founding of the State of Israel.

The Alliance also had lunch with Babacar Diagne, the Senegalese Ambassador to the U.S.

Senegal, a Muslim-majority country of 14 million people on the northwest coast of Africa, historically had good ties with Israel, but all that changed after the Yom Kippur War, when much of the Muslim world — both the Arab/Middle Eastern/North African and the Black African — cut ties with Israel.

Over the past decade, the relationship between Israel and Senegal had been improving, and Israel provides much of the technology for Senegal’s agricultural economy. Senegal does not yet have an ambassador to Israel — its ambassador to Cairo covers several countries in the region — but Israel has an ambassador to Senegal.

However, Senegal was one of those countries on the U.N. Security Council to vote for Resolution 2334. After the vote, Israel recalled ambassadors and cut some ties with all those countries.

The Alliance members and Ambassador Diagne — who expressed a warm affinity toward Israel, noting that Senegal, too, suffers from Islamist terrorism — discussed ways that the countries’ relationship could be repaired.

Mr. Diagne expressed sorrow over Israel’s recall of its ambassador. Asked by this reporter why Senegal supported Resolution 2334, the Ambassador replied, “We thought that voting for the resolution was a way of opening a discussion.” He said that Senegal supports a two-state solution — “We think a one-state solution will lead to a civil war … we think this world needs peace.” Mr. Diagne also noted that perhaps it was all part of playing politics, to support the resolution while hoping that the U.S. would veto rather than abstain, thereby nullifying it.

Ambassador Diagne, who proudly noted that his best friend in school in France was a Jew, seemed interested in learning more about the history of the Middle East, and about how peace may be achieved. Speaking once again of what he sees as a strong natural connection between his country and Israel, Mr. Diagne said: “Jews have suffered, they had the Holocaust, but then they made it in their own country. We blacks have historically suffered from slavery, and Israel could be an example to show us the way.”

After the long day on the Hill, the Alliance members expressed satisfaction that it had accomplished its mission: thanking the senators for their support of Israel and expressing continued hope for strong, bipartisan relations between the allies.

Joseph B. Stamm, a veteran political activist and Alliance co-chair, said this was “one of the most important missions” he has ever undertaken.

“It is very important to do damage-control as it relates to the shameful Resolution 2334,” said Stamm. “I think it is important that we get bipartisan support to see if the resolution can be repealed, and to put pressure on the U.N. to make sure its anti-Semitic bias changes.”

“I believe the power of the purse is a very important means of accomplishing this.”