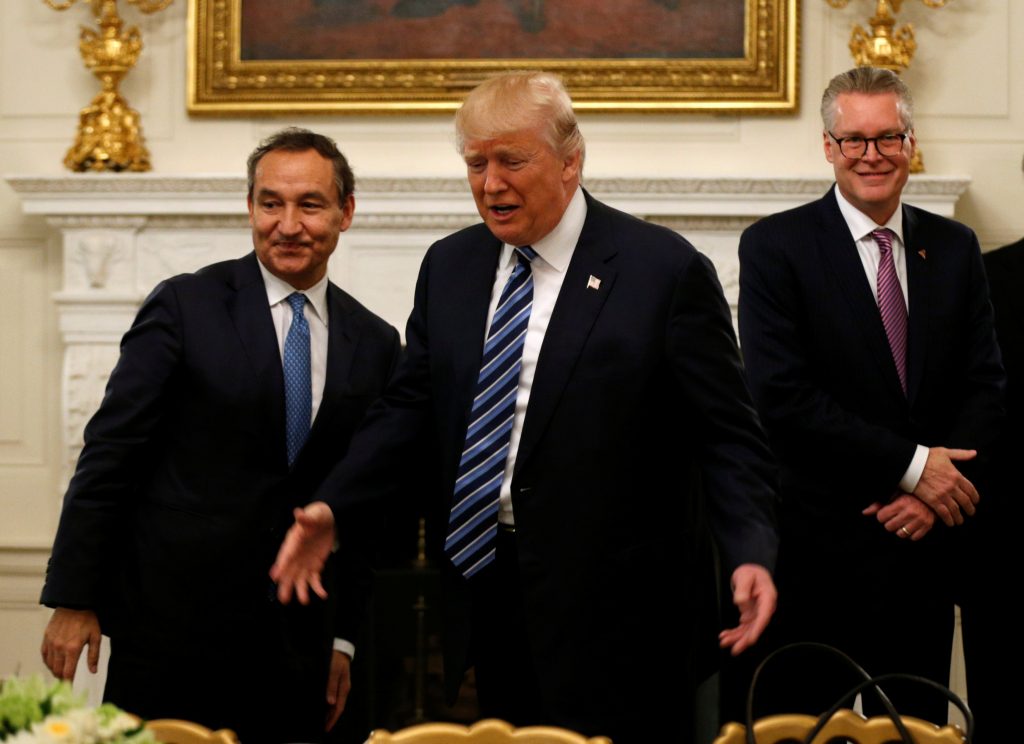 President Donald Trump gave a friendly ear Thursday to concerns from Dallas-based Southwest Airlines and other carriers about the need to modernize the nation’s air traffic control system.

Southwest chief Gary Kelly sparked that conversation at a White House meeting, bemoaning an aging system that contributes to congestion at major airports. The carrier and several other airlines have been pushing the U.S. to “privatize” the air traffic control system.

And the president appeared intrigued by what Kelly described as the “single biggest opportunity for aviation.”

“I hear we’re spending billions and billions of dollars, and it’s a system that’s totally out of whack,” Mr. Trump said at a listening session with several leaders in the airline industry.

The discussion came as part of what appeared to be a far-reaching conversation about overhauling the Federal Aviation Administration and other parts of air travel. Kelly, speaking to reporters after the hour-long session, said the meeting was “delightful.”

“We are very well-aligned on some very key topics: income tax reform, regulatory reform and especially growing our industry,” he said.

The confab marked one of the White House’s first major forays into the business of the world’s skies. It’s one of several gatherings that the president has hosted with business leaders in the early days of his administration.

In meeting with Trump, the airline executives sat down with a man who was once one of their own. The billionaire mogul, though far better known for his real estate deals, owned the less-than-successful Trump Airlines from 1989 to 1992.

President Trump has poked at the industry in recent weeks, blaming chaos that stemmed from his contentious travel ban on a Delta computer outage. But he singled out that airline for praise, saying Thursday that “Delta’s doing well.”

He went even further in congratulating all of the airlines on succeeding “despite the bad equipment that the airport gives you, in many cases.” To that end, he lamented that the U.S. has an “obsolete” plane system and airports.

“We want the traveling public to have the greatest customer service and with an absolute minimum of delays,” he said.

Parker stood out among Texas executives during the White House race in that he and other American brass backed Hillary Clinton. But a company spokesman said the White House absence stemmed from a conflict with a long-planned employee leadership conference in Dallas.

“Doug shares President Trump’s commitment to modernizing our nation’s infrastructure and looks forward to working with his administration to ensure all Americans have access to safe and efficient air travel,” American spokesman Matt Miller said Wednesday.

At the meeting, Southwest’s Kelly steered the conversation from the get-go to the country’s aging air traffic control system.

Though the U.S. has spent huge sums on a NextGen program to update the system with satellite-based technology, the effort has been plagued by delays, funding problems and other issues. And Trump made clear that he’s familiar with those concerns.

“It’s way over budget. It’s way behind schedule. And when it’s completed, it’s not going to be a good system,” he said. “Other than that, it’s fantastic.”

Kelly, seated directly across from Trump, pitched the president on the idea of creating a nonprofit group to handle air traffic control. Mr. Trump didn’t rule anything out, though he appeared more interested in making the case that the FAA should be run by a pilot.

“I just think a non-pilot wouldn’t know the sophistication of the system,” Trump said.

Trump also hedged his bets — at least in the part of the meeting viewed by reporters — on one appeal from the airline industry that has obvious ties to the president’s “America first” approach.

American, Delta and United have long cried foul over their charge that three state-owned airlines in the Middle East have used large government subsidies to boost their expansion into the U.S. That would distort the market, putting U.S. carriers at a competitive disadvantage.

But the Gulf carriers — Emirates, Etihad and Qatar — have repeatedly denied any wrongdoing. Some U.S. carriers, such as JetBlue and Hawaiian Airlines, haven’t joined in the fight. And the Obama administration never took action on the issue.

President Trump told the executives Thursday that he knows they are “under pressure from a lot of foreign elements and foreign carriers.” But he was quick to add that “at the same time, we want to make life good for them.”

Conor Shine contributed to this report.