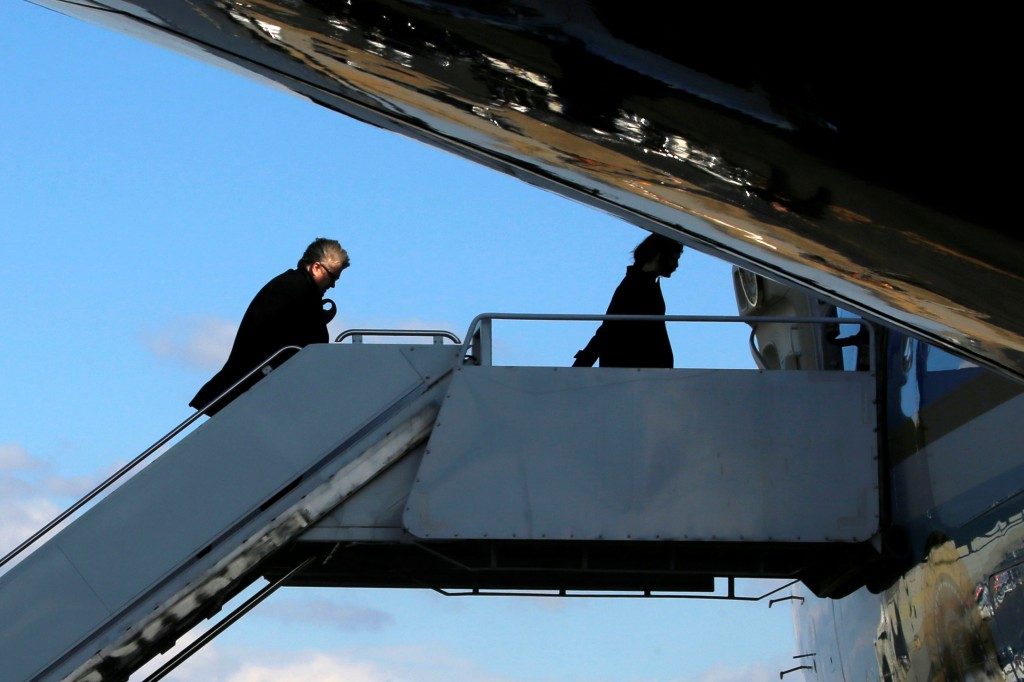 President Donald Trump called on fellow Republicans to help him enact “great and lasting change” at a party retreat Thursday but offered few details. Later his spokesman said the president will seek a 20 percent tax on Mexican imports to pay for a proposed border wall.

The president was greeted by cheers as he took the stage in a hotel ballroom, telling senators and House members, “This Congress is going to be the busiest Congress in decades — maybe ever.”

He addressed lawmakers shortly after Mexican President Enrique Pena Nieto canceled a trip to Washington next week for his first meeting with the new president due to their disagreement over which of their countries would pay to build Trump’s promised wall on the border between them.

The wall is part of Trump’s plan to halt illegal immigration to the U.S., and he has long insisted that Mexico will pay. Pena Nieto insists his country will not.

On the flight back to Washington, White House spokesman Sean Spicer told reporters traveling with the president that Trump will seek to impose a 20 percent tax on Mexican imports to pay for the wall. Congressional approval would be needed for such a step.

But then later, at the White House, Spicer tried to take back his earlier comments by saying the 20 percent tax is one of several options under consideration and Trump hasn’t settled on it as the way to recoup construction costs for building the wall.

In Trump’s remarks to lawmakers, he cast the cancellation of his engagement with Pena Nieto as a mutual decision, saying they had “agreed to cancel our planned meeting.” Trump had tweeted early Thursday that “it would be better to cancel the upcoming meeting” given Pena Nieto’s unwillingness to pay for the border wall.

Mexico ships 80 percent of its exports to the United States, and around half of Mexico’s foreign direct investment has come from its northern neighbor over the last two decades.

“The U.S. has a 60 billion dollar trade deficit with Mexico. It has been a one-sided deal from the beginning of NAFTA with massive numbers… of jobs and companies lost. If Mexico is unwilling to pay for the badly needed wall, then it would be better to cancel the upcoming meeting,” Trump said in his tweet before the planned Pena Nieto talks were scrapped.

Trump’s election put Republicans in control of both the White House and Congress for the first time in more than a decade.

Addressing fellow Republicans, the president spoke about his agenda in broad terms and then skipped a planned question-and-answer session. He gave the lawmakers no specific marching orders for tackling the repeal and replace of “Obamacare,” one of the most complicated issues Congress is expected to tackle this year.

Spicer had said Trump on Thursday would continue to exercise his executive authority to implement his agenda, but an event listed on the president’s public schedule was postponed and could now take place on Friday.

The White House is considering steps to commission a probe of widespread voter fraud, restrict the flow of refugees to the U.S., and negotiate individual trade deals with countries that signed the proposed Trans-Pacific Partnership trade pact. Trump took steps earlier this week to withdraw the U.S. from TPP, saying the agreement puts American workers at a disadvantage.

Trump’s brief trip to Philadelphia marked his first flight on Air Force One, the familiar blue and white government plane that has long ferried presidents around the country and the world. Spokesman Sean Spicer described Trump — who traveled throughout the campaign and the transition on his own private jet — as being “in awe” of the presidential aircraft.