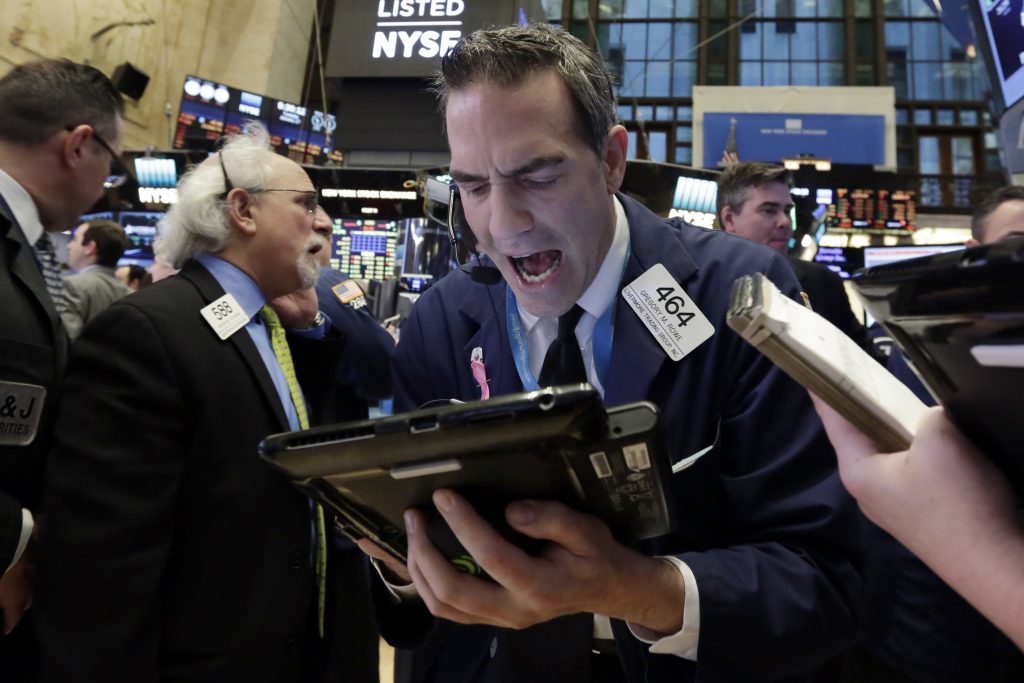 Bond prices rose, while the dollar’s value sank against the British pound and other rivals.

MIXED MARKET: Just as many stocks rose on the New York Stock Exchange as fell, despite all three major stock indexes being down.

Companies that make everyday items for consumers were among the gainers, including tobacco company Reynolds American. It rose $1.74, or 3.1 percent, to $57.71 after British American Tobacco said it would buy the remaining 57.8 percent of the company that it doesn’t already own. British American Tobacco said it will pay $59.64 per share in cash and stock.

Utilities and real-estate investment trusts also rose, but those gains were offset by sharp losses for financial stocks.

DOLLAR DROP: The dollar sank against most of its rivals, including the Japanese yen, euro and Canadian dollar. Its sharpest drop came against the British pound, which rallied after British Prime Minister Theresa May gave a highly anticipated speech about her country’s pending departure from the European Union.

One British pound buys $1.2384, up from $1.2190 late Friday. Still, even after its gains, the pound remains more than 15 percent weaker against the dollar than it was in June, when the U.K. voted to quit the European Union.

BREXIT UPDATE: British leader May said in her speech that the U.K. will make a clean break from the European Union and depart its single market. She also acknowledged for the first time that Britain’s Parliament will be able to vote on the final deal. Uncertainty about the pending divorce has shaken investors since June, when the U.K. voted to quit the European Union.

When bond prices rise, their yields drop, and the yield on the 10-year Treasury fell to 2.34 percent from 2.38 percent late Friday. It earlier was close to its lowest level since late November. Yields on two-year and 30-year Treasurys also sank.

POWERED UP: NRG Energy rose 82 cents, or 5.6 percent, to $15.42 and was one of the top-performing stocks in the S&P 500 after an investment firm run by activist investor Paul Singer disclosed an ownership stake in the power company.

DEALMAKING: Oil and gas company Noble Energy rose $2.35, or 6.3 percent, to $39.74 after it agreed to buy Clayton Williams Energy for $2.7 billion in stock and cash. The deal includes tens of thousands of acres in Texas that are directly adjacent to Noble Energy holdings.

TRUMP EFFECT: Tiffany fell 93 cents, or 1.1 percent, to $80.99 when many other retailers rose. The jeweler said revenue during the end-of-year shopping season was weaker than expected after sales at its flagship store in New York fell 14 percent. It blamed at least part of the drop on “post-election traffic disruptions.” Its Fifth Avenue store is steps away from the protesters and security barricades lodged in front of the Trump Tower.

EARNINGS SEASON RAMP UP: More than 30 companies in the S&P 500 are scheduled to give updates this week on how they fared during the fourth quarter, and the heart of earnings reporting season will follow in the ensuing weeks. Wall Street expects to see modest growth, but the numbers may not matter all that much.

Instead, analysts say the more useful information may be what CEOs say about how their companies are set to take advantage of big policy changes that may be on the way. Trump, who is set to take the oath of office for the presidency on Friday, has promised to revamp the country’s tax code and cut regulations.