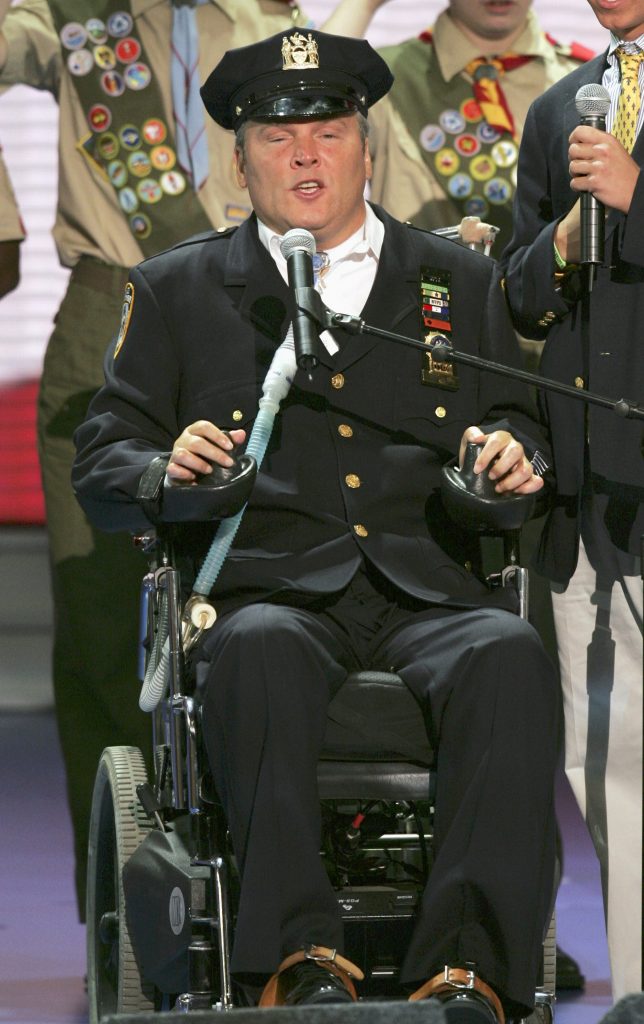 New York Police Department Detective Steven McDonald, who was paralyzed by a teenage shooter’s bullet in 1986 but publicly forgave the shooter and became an international voice for peace, died Tuesday at age 59.

McDonald had been hospitalized Friday on Long Island after suffering a heart attack and died there, the NYPD said.

“No one could have predicted that Steven would touch so many people, in New York and around the world,” police Commissioner James O’Neill said. “Like so many cops, Steven joined the NYPD to make a difference in people’s lives. And he accomplished that every day. He is a model for each of us as we go about our daily lives. He will be greatly missed and will always remain a part of our family.”

McDonald was a stocky 29-year-old patrolman, when, on July 12, 1986, he spotted bicycle thief Shavod “Buddha” Jones and two other teenagers in Central Park. He moved to frisk one of them because he believed he had a weapon in his sock. Then, the 15-year-old Jones pulled out a weapon of his own and shot McDonald three times, ran away and left him for dead.

One bullet tore into the left side of McDonald’s neck, followed quickly by another to his wrist and a third that lodged behind his right eye. It was the first shot that splintered and pierced his spinal column, paralyzing him.

Doctors told McDonald’s wife, Patti McDonald, who was three months expectant, that he wouldn’t live through the afternoon.

But his story had an unlikely ending: McDonald believed what happened on that day was nothing less than G-d’s will. On March 1, 1987, McDonald had his wife read a statement about his feelings toward the teen who crippled him. McDonald, who had struggled with finding his new niche in life, knew what he had to say.

“I forgive him and hope he can find peace and purpose in his life,” McDonald said.

He never wavered from that stance.

In the years after the shooting, McDonald became one of the world’s foremost pilgrims for peace. He took his message of forgiveness to Israel, to Northern Ireland and to Bosnia.

“I have my days when I’m not feeling well — emotionally, physically, spiritually,” McDonald said in a 2006 interview at his Malverne home. “But it’s been a very, very active life.”

In the first years after the shooting, McDonald drew attention like a celebrity. He met with Pope John Paul II and Nelson Mandela, did media interviews and co-authored a book with his wife.

Later, much of the media attention disappeared, but McDonald’s commitment endured. He kept a busy schedule, speaking at schools around the country, relentlessly retelling his story to anyone who would listen. Lifted into a modified van, he traveled to hundreds of appearances each year.

The president of the Patrolmen’s Benevolent Association, Patrick Lynch, said McDonald “was a powerful force for all that is good and is an inspiration to all of us.”

“Since that fateful day in 1986, Steven dedicated his life to fighting hate and encouraging forgiveness through his actions,” Lynch said.

The McDonalds’ son, Conor McDonald, joined the NYPD and became a sergeant last year. In 2007, Patti McDonald was elected mayor of Malverne, a quaint one-square-mile suburban community of about 9,000 residents.

Jones, the teenage shooter, was sentenced to 10 years in prison for attempted murder and spent much of his time in prison getting into trouble. McDonald reached out, sending him stationery and asking to start a dialogue. The two wrote letters for a while, but the correspondence ended when McDonald turned down a request to help Jones’s family in seeking parole.

McDonald dreamed that Jones would join him on the speaking tours, creating an unlikely tag team with a mutual message of peace. But shortly after Jones’ release from prison in 1995, he died in a motorcycle accident.