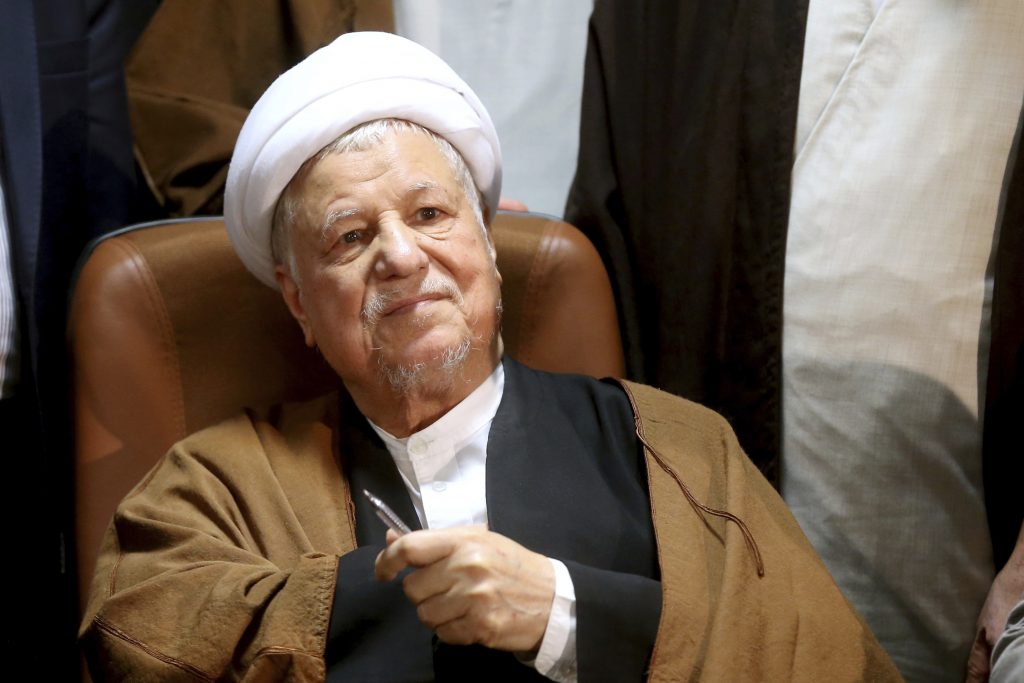 Former Iranian president Ali Akbar Hashemi Rafsanjani, one of the most influential figures in Iran since the Islamic revolution, and a driving force for moderation, has died at the age of 82 after suffering an apparent heart attack, state media reported Sunday.

Though his power had waned since serving two terms as president from 1989 to 1997, Rafsanjani retained significant clout on the Assembly of Experts that will choose a successor to Supreme Leader Ayatollah Ali Khamenei, who is 77 and has been treated for prostate cancer. His absence also could have an impact on presidential elections in May, when the pragmatic President Hassan Rouhani will seek re-election.

Rafsanjani’s death leaves a huge vacuum among moderate Iranians who seek reforms in the country’s political life and economic and cultural openings to the West. His funeral will be on Tuesday, and analysts will be looking for clues that signal whether marginalized reformists will be galvanized to come together, or whether hardliners will consolidate their power.

“It’s a loss for the pragmatist and reformist camp,” said Barbara Slavin, acting director of the Future of Iran Initiative at the Atlantic Council. “How big a loss depends on when Khamenei dies, and where Iran is. It depends on where relations stand with the United States and the international community, whether we’re back to a period of hostility, or whether the nuclear deal survives and there’s a kind of detente with the U.S. And we won’t know that until our own new president takes office and puts his policies into effect.”

Rafsanjani was one of the founding fathers of the Islamic Republic, and an aide to Ayatollah Ruhollah Khomeni, the leader of the 1979 revolution. He was involved in the secret negotiations between Iran and the United States in the 1980s that led to the Iran-Contra scandal. It was one of several Rafsanjani efforts to find a way to mend relations with Washington.

State-run media announced that he had died “after a lifetime of fighting, and constant efforts in line with fulfilling the goals of Islam and the revolution.”

During his life, Rafsanjani was a controversial figure. As president, he was reviled by many Iranians, who considered him corrupt because of suspicions he had used his position to enrich his family. He and his intelligence services were also implicated in the assassinations of dissidents in Iran and Europe, and in terrorist attacks on civilians.

“Although Rafsanjani has long been identified as a pragmatist, he was an integral part of the Islamic Republic’s security apparatus, one which tortured dissidents, conducted foreign assassinations and terrorist attacks, and helped cover the Iranian nuclear program in a shroud of secrecy while soliciting foreign assistance and material,” said Behnam Ben Taleblu, an Iran analyst with the Foundation for Defense of Democracies.

But in the eyes of many reformists, Rafsanjani redeemed himself when he supported the Green Movement after the 2009 election contested by protesters demanding the removal of Mahmoud Ahmadinejad from office.

“Since 2009, he was the center of gravity for reformist and moderate forces,” said Hadi Ghaemi, head of the New York-based International Campaign for Human Rights in Iran. “Now, in a way, they have lost their godfather.”

Rafsanjani played a key role in Rouhani’s election, even leading Rouhani into parliament by the hand the first time he visited as president. Rouhani, whose administration negotiated the 2015 Iran nuclear deal with the United States and five other world powers, is often mentioned as a successor to become supreme leader once Khamenei dies. But the assumption was that Rafsanjani would be alive to help make that happen.

“His chances of winning this power struggle, without Rafsanjani pulling for him in the background, is now reduced,” said Trita Parsi, head of the National Iranian American Council.

Rafsanjani was born in 1934 to a family of farmers in central Iran, and studied theology in Qom with Ayatollah Khomeini. During the 1960s and 1970s, he took part in the Islamic student movement opposing the Shah, and was imprisoned several times.