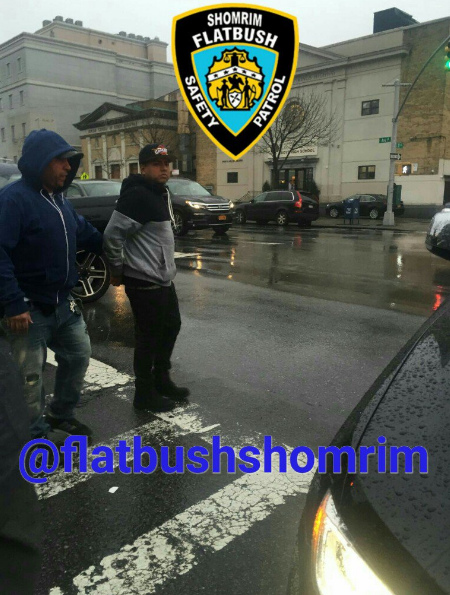 Flatbush Shomrim assisted NYPD officers in apprehending several men who participated in a mugging in Midwood on Monday, and who may have carried out previous robberies as well.

In interviews with Hamodia, Sael Xuya, the victim of Monday’s mugging; Robert Moskovitz, executive coordinator of Flatbush Shomrim; and a spokesman for the NYPD described the incident that led to Monday’s arrests.

At 3:30 p.m. Monday, Xuya, an employee of the Slices of Brooklyn kosher pizza store at East 4th Street and Kings Highway, left the store and began walking home, down East 4th Street toward Quentin Road, in a heavy rainstorm. Suddenly, “a guy comes behind me and punches my head,” Xuya recounted. “The man grabs my phone from my hand, and then another man comes from behind me and puts a knife in my stomach.” The second man took Xuya’s wallet, which contained $300.

Xuya said there was a third man in the group who acted as a lookout and asked Xuya, “Do you have any more money?”

Greenstein called Flatbush Shomrim and, as he chased the Explorer, stayed on the phone with Shomrim to describe his location, block by block. Shomrim notified the police, and 10 Shomrim members also responded to the call.

Eventually, the Explorer began heading down East 12th Street, and Shomrim set up a roadblock at the corner of Ave. P and East 12th.

Shomrim confronted the group, and the two main perpetrators fled. One was apprehended immediately, while the other was caught after a chase and search by Shomrim members as he was “attempting to jump over a fence to Coney Island Avenue,” said Moskovitz.

A police search of the Explorer yielded a knife and five cellphones, indicating that Monday’s incident may not have been the first time these perpetrators have been involved in robberies.

The third man, who seems to have had less involvement in the crime, was not charged.

Bail was set for Cholula-Perez at $10,000 and for Pascual at $20,000. Their next court date is Friday, January 6. If convicted of the most serious charges, they each face a maximum of 25 years in prison.

Xuya says he was not badly hurt and is feeling fine.