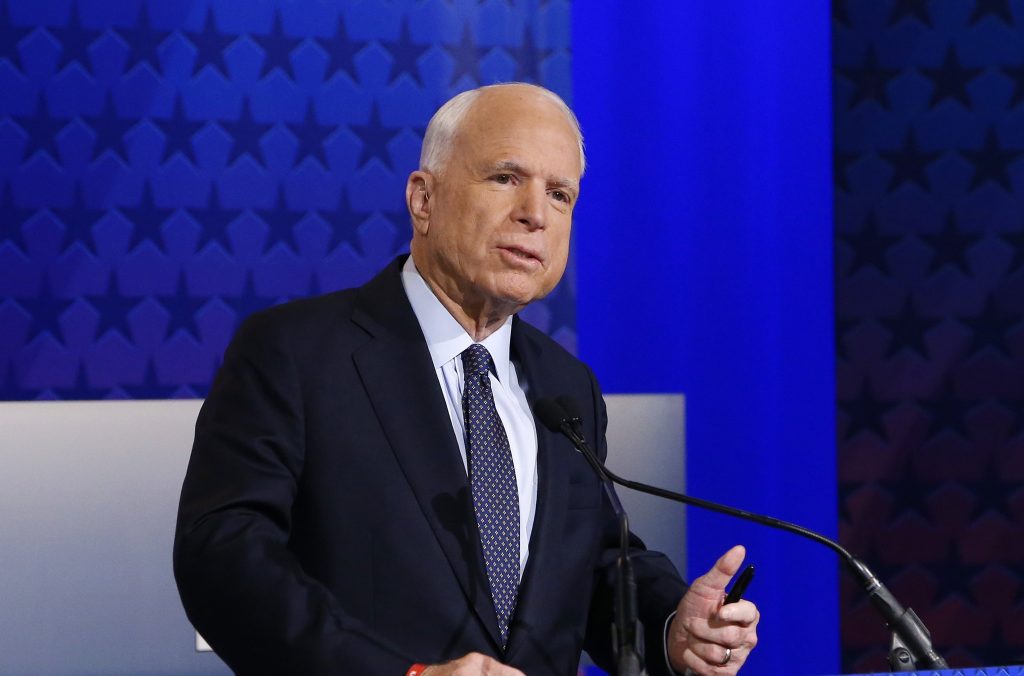 McCain told CNN that Democratic President Barack Obama has no strategy for dealing with Russian cyber-attacks. “We need a select committee. We need to get to the bottom of this, and we need to find out exactly what was done and what the implications of the attacks were, especially if they had an effect on our election.”

Sen. Charles Schumer, D-N.Y., also called on Sunday for a special Senate investigation. Schumer and McCain were among four senior senators who issued a bipartisan statement a week ago, warning that “our democratic institutions have been targeted.”

While U.S. intelligence officials have reportedly determined that Russian president Vladimir Putin directed the hack in an effort to buoy the Republican Trump’s candidacy, the president-elect has played this down by arguing that no one knows who was behind the leak of emails from senior staffers on Democrat Hillary Clinton’s election campaign and from the Democratic National Committee.

Reince Priebus, whom Trump has named White House chief of staff, dismissed reports that the intelligence community had concluded that Russia was the culprit, arguing that the chiefs of the Central Intelligence Agency and the Federal Bureau of Investigation, as well as the director of national intelligence, had yet to publicly state where they stood.

“These guys should be straight with the American people and come out and say it. I don’t think they’ve been clear about it. I think it’s been all over the map,” Priebus told Fox News Sunday. He was asked to comment on news reports that CIA Director John Brennan had informed intelligence insiders that Brennan, FBI Director James Comey, and Director of National Intelligence James Clapper were in agreement. “We haven’t heard from Clapper. We haven’t heard from Comey,” Preibus said.

When asked by CBS host John Dickerson about allegations of Russian interference with the election, Kellyanne Conway, senior adviser to Trump, said, “Where’s the evidence?”

“The entire nonsense about the electors trying to use the Russian hacking issue to change the election results is really unfortunate,” she told Dickerson. “I think that actually undermines our democracy more than any other conversation that we’re having right now.”

Dickerson pressed Conway several times about whether Trump had evidence that Russians did not hack the election that would cause his stance to differ from that of the wider intelligence community.

“The president-elect receives intelligence briefings that I am not privy to,” Conway responded.

She also suggested that President Barack Obama’s recent tough talk on Russia came because he was “under political pressure” to do so. On Friday, Obama said the United States will retaliate against Russia “at a time and place of our own choosing” over its malicious cyber activities during the U.S. election.

“The president-elect respects the ability of President Obama to do what he sees necessary in any number of different arenas,” Conway said. “It does seem to be a political response at this point, because it seems like the president is under pressure from Team Hillary, who can’t accept the election results.”

The issue is registering with the public. A new NBC/Wall Street Journal poll finds more than half of Americans say they are significantly bothered by the news that hackers working in connection with a foreign government were involved in trying to influence November’s vote. Forty-three percent of respondents say they are bothered a “great deal” about the interference, while an additional 12 percent were bothered “quite a bit.”

Those numbers mask a notable partisan divide: a combined 86 percent of Democrats are bothered a great deal or quite a bit by the interference, versus just 29 percent of Republican respondents.

James Woolsey, a Trump national security adviser who served as CIA director under President Bill Clinton, said on ABC that “there’s strong chance the Russians are behind it.” Former Secretary of Defense Robert Gates, who has served presidents of both political parties, told NBC the hacks were “a thinly disguised, covert operation to discredit the American election and to basically allow the Russians to communicate to the rest of the world that our elections are corrupt.”

But Republican Sen. John Thune of South Dakota told Fox News it remains to be seen what exactly motivated the attacks, and “it’s a little bit premature to start coming to conclusions about what the U.S. should do next.”

Priebus said the debate over Russia’s role in the election was a distraction.

“Let’s assume it’s true. There is no evidence that shows the outcome of the election was changed because of a couple of dozen John Podesta emails that were out there,” he said. Priebus was referring to hacked emails of Clinton’s campaign chairman, which actually numbered in the tens of thousands and were released over a series of several weeks leading up to the election. “People didn’t like the product. That’s why Hillary Clinton lost.”