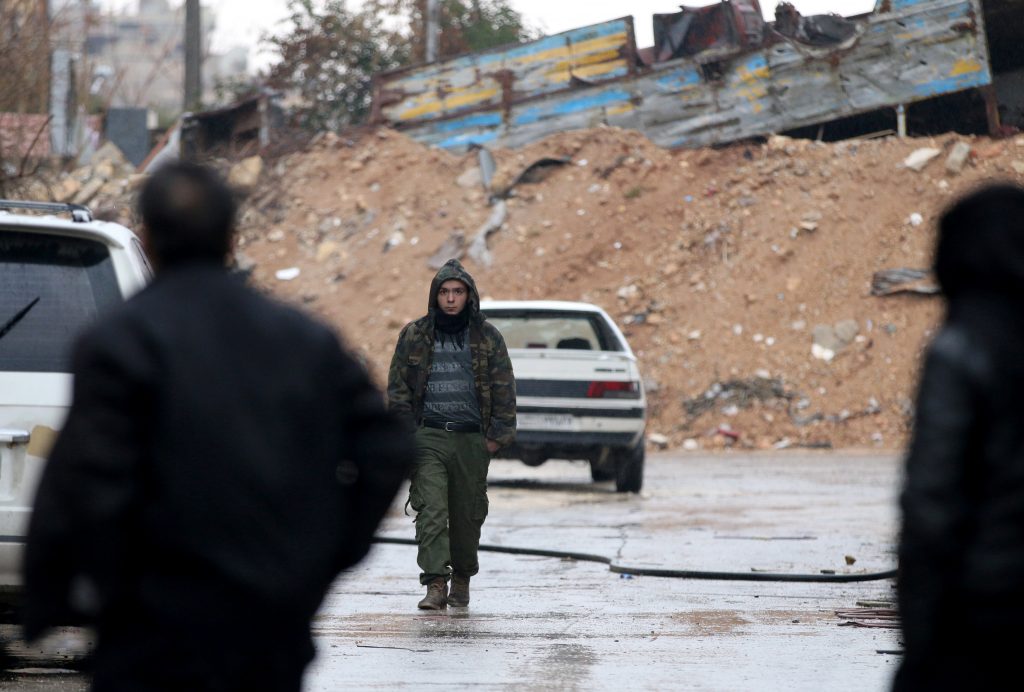 A ceasefire deal between rebels and the Syrian government in the city of Aleppo effectively collapsed on Wednesday, with fighter jets resuming deadly air raids over the opposition’s densely crowded enclave in the east of the city.

The attacks threatened to scuttle plans to evacuate rebels and tens of thousands of civilians out of harm’s way, in what would seal the opposition’s surrender of the city.

The evacuation was supposed to begin at dawn but shelling resumed in the morning hours and buses meant to be used in the pullout of rebels and civilians returned to their depots empty. Activists and fighters trapped in the opposition’s last sliver of territory in Aleppo said pro-government forces had been striking their district with dozens of rockets since mid-morning.

They said aircraft resumed bombing shortly after noon. Some shells fell near and around the one remaining hospital in the one-square mile enclave. It was nearly impossible for the rescuers to account for the dead because of the continued bombings, they said.

“They began to strike as if there’s no such thing as a ‘ceasefire’ or ‘civilian evacuation,'” said media activist Mahmoud Raslan.

It was not clear whether the planes were Syrian or Russian. The Britain-based Syrian Observatory for Human Rights monitoring group reported at least six people had been killed.

Syrian President Bashar Assad, speaking in an interview with Kremlin-backed media outlet Russia Today, said the ceasefire was designed stop his government’s advance in the city and “keep the terrorists and save them.”

In excerpts of the interview aired Wednesday, Assad said western countries pressured Russia for the ceasefire when rebels appeared to be on the verge of losing the territory they have held since 2012.

A legal adviser to the rebels accused Iran of foiling the Russia- and Turkey-brokered deal by imposing new conditions on the rebels. Along with Russia, Iran backs President Bashar Assad’s government and has committed advisers and elite Revolutionary Guard forces to the government’s war. Turkey backs some of the rebel groups fighting to topple Assad.

Osama Abo Zayd, the adviser, said Iran demanded the remains of Iranians killed in Aleppo be returned and that Iranian hostages held in rebel-controlled Idlib province be released. He said the conditions were “exclusively sectarian and crippling.”

The Syrian government, meanwhile, withdrew its green-colored buses from the evacuation point at the edge of the city’s opposition enclave. The Lebanese al-Manar TV channel, the media arm of the Lebanese terrorist Shiite group Hezbollah fighting alongside Assad’s forces, broadcast footage of the buses leaving the evacuation point empty and said government forces had resumed fighting with rebels in the city.

“People have left their shelters …. to be ready for the evacuation. I can’t describe it,” Abu Jaafar said. “Since the morning, they started to target the areas where people have gathered … these people were walking to the crossings designated for exit.”

Mohammed Khandaqani, who runs a medical center and is a resident of eastern Aleppo, said his cousin was killed a day earlier and they still can’t locate his body because of the resumption of shelling. As they searched for his body, shells and missiles fell around the hospital, the only functioning clinic in the enclave.

“I am in a pitiful state. I am going through the hardest times of my life,” Khandaqani said. “We still can’t find his body. His father is going to die. As we searched for him, the shelling and bombing restarted, in and around the remaining hospital.”

Activists in eastern Aleppo blamed the violence on pro-government forces, saying they started shooting first. Media activist Mahmoud Raslan said he was reporting for a Turkish agency when a rocket crashed nearby at around 10:15 a.m. He was unharmed.

The Russian Defense Ministry said in a statement that the rebels “resumed the hostilities” at dawn, trying to break through Syrian government positions to the north-west. Government state media reported casualties.

By late afternoon, the Observatory said rebels intensely shelled Foua and Kfraya, two pro-government towns they besieged in the nearby Idlib province.

Turkish Foreign Minister Mevlut Cavusoglu accused the Syrian government and its allies of trying to scuttle the deal. “We see now that the regime and other groups are trying to obstruct this (deal),” he said in remarks published by the state-run Anadolu Agency. “This includes Russia, Iran, forces supported by Iran and the regime.”

The surrender of Aleppo’s remaining opposition-run neighborhoods to government control would be a turning point in Syria’s civil war.

The last-minute deal was mediated by Ankara and Moscow as the rebel enclave rapidly dissolved and ceded more and more territory in the face of the brutal advance by Syrian forces, backed by Russia and assisted by Shiite militias from Lebanon, Iraq and Afghanistan.

Late Tuesday night, the U.N. envoy for Syria, Staffan de Mistura, called for immediate access to the former rebel enclave to confirm the end of military operations and to oversee the safe departure of tens of thousands of civilians and opposition fighters. De Mistura was at the Security Council where an emergency meeting for Aleppo was held.

Brita Haj Hassan, a Syrian opposition official living in exile, said from Luxemburg that there were 800 sick and wounded people requiring immediate medical evacuation from eastern Aleppo. He said the U.N. and others had informed the opposition the evacuation had been delayed until Thursday but there was no comment from the Syrian government, the United Nations or aid groups on the ground.

The dramatic developments surrounding Aleppo – which would restore the remainder of what was once Syria’s largest city to Assad’s forces after months of heavy fighting and a crippling siege – followed reports of mass killings by government forces closing in on the final few blocks still held by the rebels.

U.N. Secretary-General Ban Ki-moon told the emergency meeting late Tuesday that he had received “credible reports” of civilians killed by pro-government forces as they swept into the last rebel areas in Aleppo.

Bashar al-Ja’afari, Syria’s U.N. ambassador, denied any mass killings or revenge attacks, but added it was Syria’s “constitutional right” to go after “terrorists,” a blanket government reference to all opposition fighters.

“Aleppo has been liberated from terrorists and those who toyed with terrorism,” he said. “Aleppo has returned to the nation.”