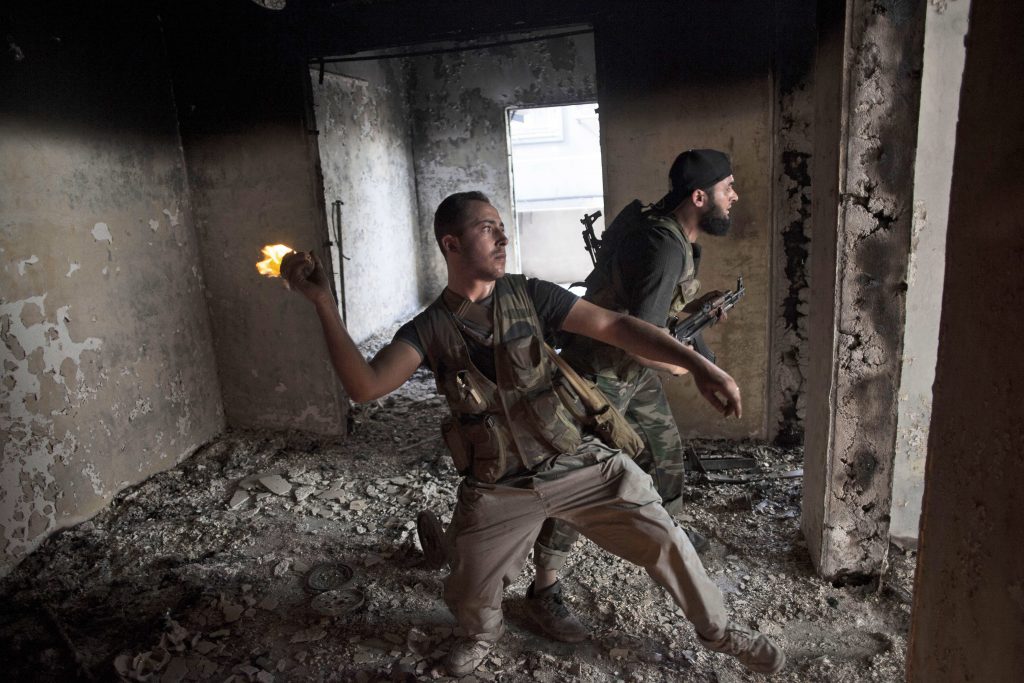 The Syrian government’s capture of eastern Aleppo, held for more than four years by rebels, marks a horrific new chapter for Syria’s largest city. Here’s a look at key events in Aleppo since the start of Syria’s uprising nearly six years ago:

— March 2011: Protests erupt in the southern city of Daraa over the detention of a group of boys accused of painting anti-government graffiti on the walls of their school. On March 18, security forces open fire on a protest in Daraa, killing four people in what activists regard as the first deaths of the uprising. Demonstrations spread, as does the crackdown by President Bashar Assad’s forces, eventually igniting a full-scale civil war.

— July 2012: Rebel fighters seize eastern Aleppo, dividing the city. The intense fighting that follows, including almost daily barrel bombs dropped on the poorer and more densely populated rebel-held east, causes an estimated one million civilians to flee. Another half million are displaced inside the eastern part of the city in the first year of the conflict.

— October 2012: The U.N. negotiates a short-lived truce for the whole city during the Muslim Eid al-Adha holiday. Fighting destroys cultural and historic sites, including the Grand Umayyad mosque, which both sides fought to control.

— December 2012: Rebels launch an offensive that expands their presence in Aleppo province and secures supply lines to the Turkish border. They seize a number of military and air bases, increasingly isolating government forces. All flights from Aleppo airport are suspended after al-Qaida-linked fighters threaten to shoot down civilian planes.

— January 2013: Bodies begin washing up on the banks of Aleppo’s Queiq River, in the rebel-held Bustan al-Qasr neighborhood. Human Rights Watch says at least 147 bodies were retrieved from the river between January and March. It says the victims were most likely killed in government-controlled areas.

— April 2013: Aleppo’s ancient Citadel, used by government forces as a base, comes under rebel fire. The government targets the Umayyad mosque minaret, suspecting rebels were using it as a base. Amid the fighting, passageways between the two sides of the divided city emerge, allowing an informal link for residents, but also turning deadly at times, as sniper fire kills many.

— August 2013: Insurgents gain control of the Aleppo-Damascus highway, tightening the siege on the government part of the city. Residents of eastern Aleppo take food and vegetables through illicit passageways to their relatives in western Aleppo.

— October 2013: Poor coordination and infighting weaken the rebels’ ranks. That winter, Islamic State terrorists clash with the rebels, establishing a presence in the eastern part of the city.

— December 2013: The government begins an unprecedented campaign of dropping barrel bombs on Aleppo city and surrounding areas, driving more people out of eastern Aleppo. IS expands its presence in the eastern part of the city.

— January 2014: Rebels unite against IS, driving the terrorists out of Aleppo city. Government forces exploit the fighting to push the rebels back.

— May 2014: Using a new tactic, rebels tunnel beneath a hotel used as a government command and control center and blow it up. The government’s barrel bomb campaign on eastern Aleppo intensifies.

— March 2015: Insurgents blow up the Air Force Intelligence building in Aleppo after digging a tunnel, a symbolic victory. The newly formed Army of Conquest, which brings together rebels and al-Qaida-linked fighters, seizes Idlib city to the northwest.

— October 2015: Russia begins launching airstrikes to bolster Assad’s forces. Syrian troops launch an offensive around Aleppo. Iraqi, Lebanese and Iranian militias also throw their weight behind the government, setting the stage for a wider offensive against Aleppo that would continue until the following year.

— February 2016: Russia and the U.S. broker a ceasefire that excludes terrorists. Signs of normal life return to Aleppo.

— April 2016: The ceasefire collapses, bombing resumes, and the Castello road, the only road out of eastern Aleppo, becomes a death trap.

— July 2016: The government and allied forces impose a full siege on eastern Aleppo, home to an estimated 250,000 people. Rebel fighters break the siege for a couple of weeks from the southern front, but it is reimposed by August.

— September 2016: A ceasefire negotiated by Russia and the United States holds for a few days, but talks to bring in aid go nowhere, and an airstrike hits a humanitarian aid convoy north of the city.

— October 2016: Russia announces it is suspending its airstrikes on eastern Aleppo and designates humanitarian corridors, urging the rebels and residents to leave the eastern enclave. The rebels reject the offer, no one uses the corridors and the U.N. says it cannot carry out medical evacuations due to security concerns. The government continues its air raids on eastern Aleppo.