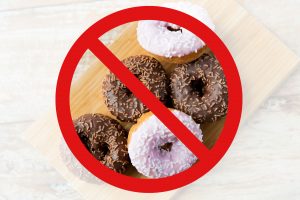 After taking on fast food, junk food and chocolate milk, Health Minister Rabbi Yaakov Litzman is targeting another tasty, if high-calorie and unhealthy, snack – the classic sufganiyah, the Chanukah-season doughnut most usually filled with jelly. Now, in the weeks before Chanukah, the doughnuts are everywhere, including schools, offices and stores.

They may be tasty, Rabbi Litzman said at a food and health conference in Tel Aviv Sunday, but they are definitely not very good for those who eat them. Fried in cheap oils, the average doughnut contains between 400 and 500 calories. Those are empty carbohydrates that raise blood sugar levels, guaranteeing the eater will hit a sugar high and then sink down – and that s/he will be hungry again within a short period of time.

“There are alternatives to everything,” he said at the conference. “There is no need to stuff our children with these items, which do not provide proper nutrition and are not part of a healthy diet.” Even though the consumption of sufganiyot are a time-honored tradition at Chanukah time, “I would like to see them go out of style. Of course one can have some, as this is a Chanukah tradition, but they are not necessary, as there are alternatives.”

In recent months, Rabbi Litzman has railed against fast food – specifically pointing to fast food chain McDonald’s, which has dozens of branches in Israel – and called on Israelis to avoid such establishments, for the sake of their health. Also on the “bad list” is “choko,” the little bags of sugar-laden chocolate milk that generations of Israelis grew up on, which will no longer be distributed in schools. In addition, the Education Ministry, in conjunction with the Health Ministry, announced that subsidized lunches served in school will cut high-calorie, high-fat, high-sugar content and nitrite-laced processed foods like cakes, cookies, croissants, wafers, french fries, hot dogs, kebabs and even beloved schnitzels. In their place will come lighter, healthier fare, including hard boiled eggs, yellow cheese with up to 9 percent fat content, cottage cheese, 5 percent spreadable white cheese, tehina, tuna, and low-fat hummus.

“We Israelis are among the worst in sugar consumption, and fourth or fifth in child obesity rates,” Rabbu Litzman said at a conference on children’s health in Tel Aviv. “This must be stopped, we have to stop giving our children this garbage. It is detrimental to the health of our youth. I will make sure that this is no longer distributed in schools.”

According to statistics supplied by the Central Bureau of Statistics and analyzed by the Ministry, 44 percent of Israelis – nearly one out of two – are overweight or obese, and the same is true of 21 percent of first-graders. By seventh grade, 30 percent of kids are overweight. Rabbi Litzman – along with many health professionals – believes that junk food is largely responsible for this situation, and he is considering numerous legislative initiatives to curb consumption of junk food. Among those initiatives are labeling – cigarette pack-style – the packages of snack food to emphasize their calorie and fat level, along with a “health score,” to be determined by professionals, which will rank food products on a scale between 1 and 10 (or 1 and 100) on its desirability. The healthier a food – taking into account its nutrient level, calorie, fat, sugar, salt and other factors – the higher a score it will get.

In the past, Rabbi Litzman said that among the biggest “victims” of junk food was the chareidi public. Children are often “treated” to snacks at Talmud Torahs or shuls after they participate in learning sessions, and that practice needed to stop, or at least to be adjusted in order to prompt children to eat more healthily.