National ANALYSIS: ‘Alt-Right’ Splinters as Supporters, Critics Agree It Was White Supremacy All Along
National 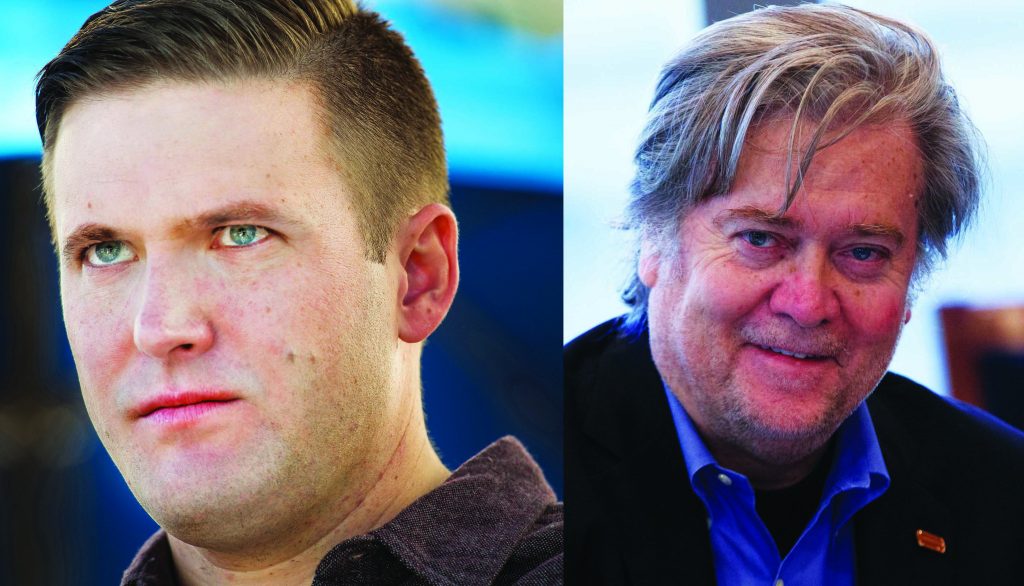 When people start throwing Nazi salutes in public, it has a way of clarifying where everybody stands.

The loosely defined “alt-right” movement — made up of social-media-savvy white supremacists, neo-Nazis, anti-Semites, misogynists and other fringe figures who supported Donald Trump’s election — has splintered in recent weeks as less hard-core supporters distance themselves from the term.

At the same time, critics and media outlets have moved to avoid using the phrase “alt-right,” saying it’s a deceptive new term for old far-right ideologies that have traditionally been shunned in American public life.

And among die-hard fascists, the writing is on the wall.

“The alt-right is and has always been the same thing as it is right now — a white identity movement,” Andrew Anglin wrote at the Daily Stormer, a popular neo-Nazi site. “Looks like we finally have this term for ourselves. Finally.”

The shift came after a meeting of white nationalists inside the Ronald Reagan Building in Washington on Nov. 19, where members threw Nazi salutes and shouted, “Hail Trump, hail our people, hail victory!”

The man they were saluting was the white nationalist who coined the term “alternative right,” Richard Spencer, who had just given an anti-Semitic speech in which he quoted Nazi propaganda and called the United States a “white country.”

One white nationalist called it “the Heil Heard Around the World.” Coverage of the Nazi salutes went viral, and public reaction was severe.

Readers denounced news outlets, including the Los Angeles Times, for not portraying Spencer and his supporters in a harsher light. The left-wing investigative magazine Mother Jones, which ran a deep profile of Spencer in October, was criticized for titling its piece, “Meet the Dapper White Nationalist Who Wins Even if Trump Loses.” The word “dapper” was soon removed from the headline.

Frustration also boiled over inside the mainstream media.

One Politico editor, Michael Hirsh, resigned last week after posting Spencer’s addresses on [social media] and telling followers to “Stop whining about Richard B. Spencer, Nazi, and exercise your rights as decent Americans,” according to comments first reported by the Daily Caller.

“He lives part of the time next door to me in Arlington. Our grandfathers brought baseball bats to Bund meetings,” Hirsh wrote, alluding to Jewish Americans who attacked Nazi sympathizers before World War II. “Want to join me?” (Politico’s top editors denounced Hirsh’s remarks.)

Trump himself disavowed the alt-right in a meeting with journalists from The New York Times, telling them, “It’s not a group I want to energize, and if they are energized I want to look into it and find out why.”

Among the alt-right’s less hard-core associates, the coverage of the Nazi salutes has been like a light suddenly turned on in a dark room. They scattered, issuing clarifications and recriminations along the way.

Paul Joseph Watson, an editor for the conspiracy-minded site InfoWars, said in July that he was “in the alt-right,” but then denied it last week, going on to argue that two different factions of the group had emerged.

“One is more accurately described as the New Right. These people like to wear MAGA (Make America Great Again) hats, create memes & have fun,” Watson wrote on [social media], criticizing mainstream media for focusing on Trump’s racist supporters. “They include whites, blacks, Asians, Latinos … These are the people who helped Trump win the election.

“The other faction likes to fester in dark corners of [social media] and obsess about Jews, racial superiority and Adolf Hitler. This is a tiny fringe minority. They had no impact on the election.”

Some white nationalists themselves have a term for the split: the alt-right versus the “alt-lite.”

White nationalists are alt-right; right-wing sites like Breitbart News and its chairman, the new White House adviser Stephen K. Bannon, are alt-lite, according to Brad Griffin, a white nationalist who blogs under the pen name Hunter Wallace.

“Steve Bannon is the most important figure in the alt-lite,” Griffin wrote. “We all see Breitbart as the premier alt-lite website which has popularized a diluted version of our beliefs.”

Breitbart News, which channels a more nationalistic form of mainstream conservatism, gained notoriety over the last year both for implicitly supporting Trump’s candidacy and for Bannon’s proud announcement to Mother Jones in August, “We’re the platform for the alt-right.”

Left-wing critics have called the site a front for white nationalism and anti-Semitism, which its staffers have vigorously denied.

Bannon and Breitbart staffers have distanced themselves from the alt-right label, which Bannon defined in a postelection interview with The Wall Street Journal as “younger people who are anti-globalists, very nationalist, terribly anti-establishment.”

Bannon said alt-right supporters had “some racial and anti-Semitic overtones” that he said he disagreed with, and that Breitbart News provides “an outlet for 10 or 12 or 15 lines of thought,” of which the alt-right is “a tiny part.”

The heightened scrutiny of the alt-right has led mainstream institutions to draw tougher policies on addressing the movement.

After the election, Twitter banished many prominent far-right users from its service, which had been a staging ground for racist, …. and anti-Jewish attacks against public figures and journalists.

Many supporters have since retreated to a new social-media service, which bills itself as a safe space from censorship. At one point last week, at least six of [its] top 10 trending hashtags either referenced Trump or the alt-right.

On Monday, The Associated Press issued an addition to its style guide, counseling caution on the use of alt-right and urging reporters to “avoid using the term generically and without definition.” It added, “In the past we have called such beliefs racist, neo-Nazi or white supremacist.” In a memo issued to its staff after the election, NPR said, “‘White nationalist’ is the most concise description.”

The Los Angeles Times has not issued a specific style policy on alt-right, although its general guidelines call for describing groups’ beliefs rather than simply labeling them.

“The truth is, the alt-right is a new buzzword that made it appear as if these white supremacists have something different to offer,” said Oren Segal, director of the Anti-Defamation League’s Center on Extremism. “The name is an alternative to ‘white supremacy.’ They just want to make it more acceptable, digestible to white people.”

Segal added, “There’s nothing new there.”