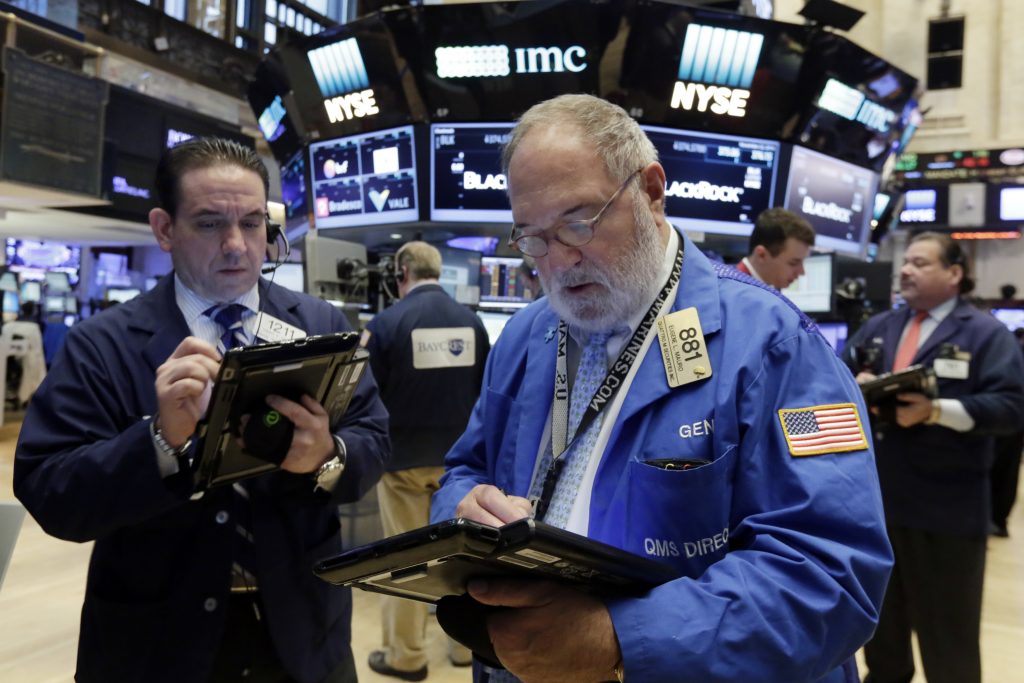 U.S. stocks are slightly higher in midday trading as discount stores and other retailers rally. An early gain briefly sent the Dow Jones industrial average above 19,000 for the first time. However, health care companies are slumping after weak earnings from medical device maker Medtronic.

On Monday all four major U.S. market indexes closed at all-times highs at the same time, something that hadn’t happened since 1999.

KEEPING SCORE: The Dow picked up 42 points, or 0.2 percent, to 18,998 as of 1:30 p.m. Earlier it went as high as 19,014. The Standard & Poor’s 500 index inched up 1 point to 2,198. The Nasdaq composite gained 11 points, or 0.2 percent, to 5,379. While indexes are setting records, trading volume is far lighter than it was after the presidential election two weeks ago. U.S. trading will be closed Thursday for Thanksgiving and markets will close early on Friday.

SMALL STOCKS GO BIG: The Russell 2000 index, which tracks smaller companies, rose 0.4 percent. It’s setting records as well and is trading higher for the 13th day in a row.

BARGAIN HUNTING: Shoppers continued to flock to discount stores, which has helped those retailers while hurting other brands. Dollar Tree raised its profit and sales forecasts after the chain reported solid results in the third quarter. Burlington Stores also raised its outlook after it posted a larger profit than analysts expected. Dollar Tree leaped $7.53, or 9.2 percent, to $89.52 and Burlington Stores added $11.66, or 15.7 percent, to $85.84.

FEELING THE PAIN: Health-care stocks, which are still trading lower than they were at the start of this year, took hefty losses. Medical-device maker Medtronic sank $7.41, or 9.2 percent, to $73.18 after it disclosed disappointing sales and cut its profit guidance. Heart device maker Edwards Lifesciences lost $4.77, or 5.3 percent, to $84.43. Health-care-products giant Johnson & Johnson slid $2.12, or 1.8 percent, to $112.88 and Abbott Laboratories, which makes infant formula, drugs and medical devices, gave up $1.63, or 4.1 percent, to $38.13.

OUCH: Medical supplier Patterson Cos. plunged to a three-year low. The company said its dental business struggled and that it ended an exclusive relationship with dental supplier Sirona that had lasted for about a decade. Its animal health business was hurt by weak prices for brand-name drugs. Patterson cuts its profit forecast and its shares dropped $9.63, or 20.3 percent, to $37.88.

SNACK TIME: Campbell Soup’s profit in its fiscal first quarter was better than expected thanks to lower expenses and better sales of snacks like Pepperidge Farm. Hormel, the maker of Spam, reported better results from its refrigerated foods business and its Jennie-O turkey unit. Hormel also gave solid guidance for the current fiscal year. Campbell Soup gained $1.97, or 3.6 percent, to $57.01 and Hormel rose 80 cents, or 2.3 percent, to $3.75.

INDUSTRIAL POWER: Industrial companies, including makers of aircraft and engines and other equipment, are trading at record highs. The S&P 500 industrial index is up 6 percent since the election, about twice as much as the broader market. Aerospace and defense companies including Boeing, Lockheed Martin and Northrop Grumman were trading around record highs before the election and have continued to rise since then.

OIL: Energy companies fell with the price of oil. Benchmark U.S. crude dipped 68 cents, or 1.4 percent, to $47.56 a barrel in New York. Brent crude, the international standard, lost 26 cents to $48.64. The price of oil rose about 4 percent Monday.

OVERSEAS: Britain’s FTSE 100 rose 0.6 percent. France’s CAC 40 added 0.4 percent while the DAX in Germany gained 0.3 percent. Japan’s Nikkei 225 dipped after a powerful earthquake in northern Japan, but the index finished 0.3 percent higher. The earthquake set off a small tsunami, but it appeared to cause only minor damage and injuries. South Korea’s Kospi rose 0.9 percent and the Hang Seng in Hong Kong climbed 1.4 percent.