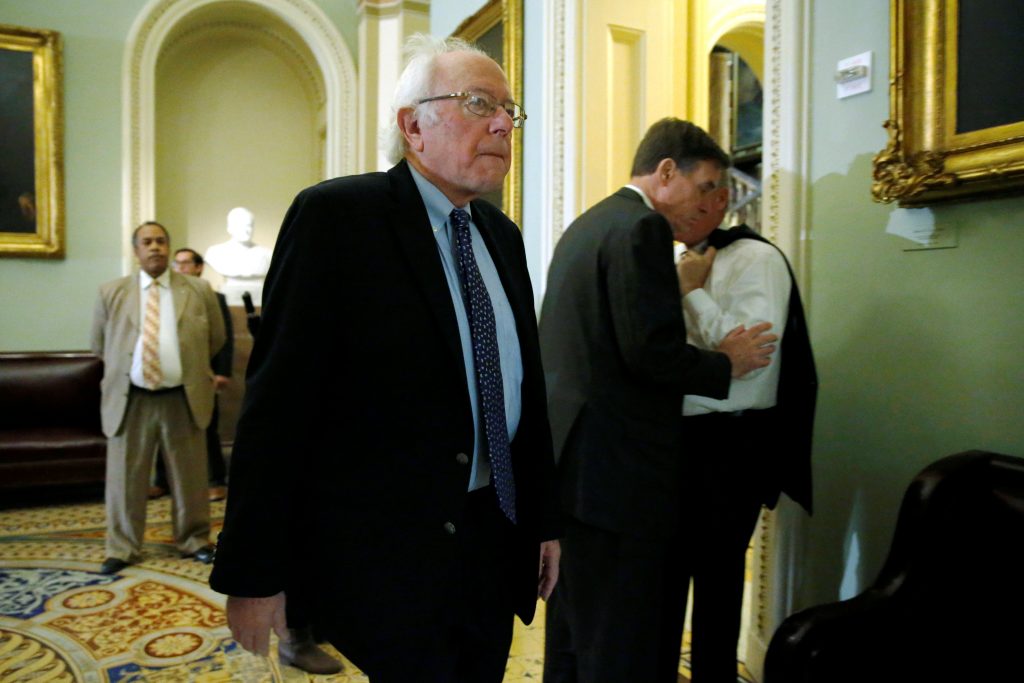 Bernie Sanders is leaving open the possibility of another presidential bid as shell-shocked liberals focus on helping the Democratic Party rebuild after Donald Trump’s victory.

“Four years is a long time from now,” said the 75-year-old Vermont independent, noting that he faces re-election to the Senate in 2018. But he added: “We’ll take one thing at a time, but I’m not ruling out anything.”

Democrats have begun post-election soul searching, with Sanders and Sen. Elizabeth Warren (D-Mass.) urging the party to embrace a more populist economic message. As some Democrats protested across the country, the party’s liberal wing began jockeying for power, arguing that Clinton’s loss could be attributed to her reluctance to fully focus on economic inequality and tougher Wall Street regulations.

“The final results may have divided us — but the entire electorate embraced deep, fundamental reform of our economic system and our political system,” Warren told the AFL-CIO on Thursday. “Working families across this country are deeply frustrated about an economy and a government that doesn’t work for them.”

Warren laid out the principles she believes should govern Democrats during the Trump era: Standing up to bigotry, pushing for economic equality and combatting the influence of Wall Street.

“We will fight back against attacks on Latinos, African Americans, women, Muslims, immigrants, disabled Americans — on anyone. Whether Donald Trump sits in a glass tower or sits in the White House, we will not give an inch on this, not now, not ever,” she said.

The sweeping Republican gains have thrown the future of the party into uncertainty, as Democrats process the scale of their losses and try to figure out the best way to come back in the 2018 elections. The Democratic National Committee may end up being ground zero for the fight, with no clear successor in line to replace interim chairwoman Donna Brazile.

Warren and Sanders were articulating the frustrations among many liberals in the aftermath of Trump’s stunning triumph over Hillary Clinton. But their influence underscores another problem facing Democrats: Many of the party’s leading voices are senior citizens, older than their core constituencies of young and minority voters. Warren is 67.

Sanders said that millions of working-class voters’ decision to back Trump was “an embarrassment” to the party and Democrats must take a strong stand against the role of corporate interests in politics. He said the party as a whole was unable to make a strong enough case to struggling workers, particularly in the industrial Midwest, who sided with Trump.

“You cannot be a party which, on one hand, says we’re in favor of working people, we’re in favor of the needs of young people, but we don’t quite have the courage to take on Wall Street and the billionaire class. People do not believe that. You’ve got to decide which side you’re on.”

While Clinton pushed for greater financial regulation and higher taxes on the wealthy, she shied away from his more populist rhetoric. And she also largely ignored white working-class male voters in favor of trying to boost turnout among minority and female supporters.

The decision infuriated former President Bill Clinton, who argued to campaign officials that they should pay greater attention to the voters who twice boosted her husband to office. During the long primary slog against Sanders, he insisted the campaign make stops in Wisconsin, which ended up being the last time either Clinton appeared in the state.

Wisconsin voted for Trump, shocking many in her campaign.