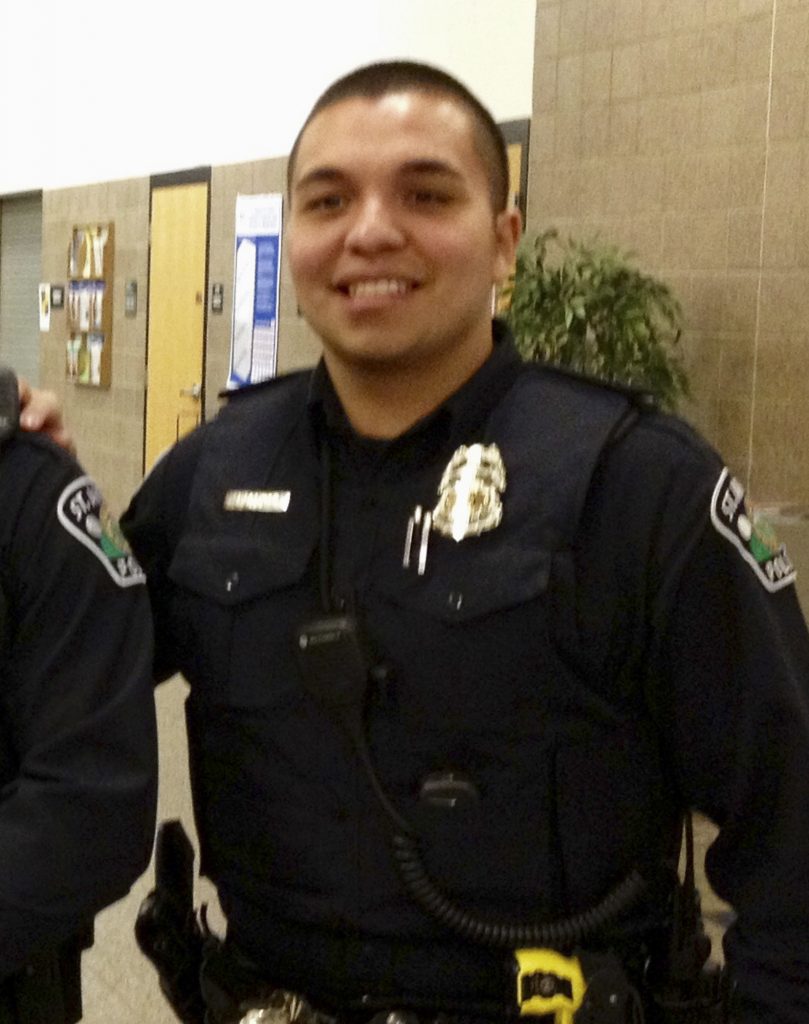 A Minnesota police officer has been charged with second-degree manslaughter in the killing of Philando Castile, a black man whose friend was in the car with him when he was shot and streamed the gruesome aftermath of the fatal shooting live on social media, prosecutors announced Wednesday.

St. Anthony police officer Jeronimo Yanez shot the 32-year-old during a July 6 traffic stop in the St. Paul suburb of Falcon Heights. Castile’s friend, Diamond Reynolds, was in the car along with her young daughter at the time. The woman said Castile was shot several times while reaching for his ID after telling Yanez he had a gun permit and was armed.

Ramsey County Attorney John Choi, whose office will prosecute the case, said Yanez shot Castile seven times, and that the evidence shows Castile was calm and complied with the officer’s requests. Prosecutors believe Castile never tried to pull his handgun from his pocket, Choi said, adding that as Castile was dying, he moaned and uttered his final words: “I wasn’t reaching for it.”

Choi said the officer’s unreasonable fear cannot justify the use of deadly force.

“No reasonable officer, knowing, seeing and hearing what officer Yanez did at the time, would’ve used deadly force under these circumstances,” Choi said as he announced the charges. If convicted of second-degree manslaughter, Yanez could face a maximum prison sentence of 10 years.

Yanez’s attorney, Tom Kelly, has said Yanez, who is Latino, was reacting to the presence of a gun, and that one reason Yanez pulled Castile over was because he thought he looked like a possible match for an armed robbery suspect. Choi said Wednesday that Castile was not a suspect in that robbery.

Kelly did not immediately return phone messages seeking comment on the charges Wednesday.

Choi got the case from investigators in late September and began reviewing the evidence for possible charges. Choi resisted pressure immediately after the shooting to turn the case over to a special prosecutor, but added one to his team to get an outside perspective. He also enlisted the help of national use-of-force consultants.

The shooting prompted numerous protests, including a weeks-long demonstration outside the governor’s mansion and one protest that shut down Interstate 94 in St. Paul for hours. The interstate protest resulted in about 50 arrests and injuries to more than 20 officers, after police said they were hit with cement chunks, bottles, rocks and other objects.

The shooting also exposed a disproportionate number of arrests of African-Americans in St. Anthony, Lauderdale and Falcon Heights, which are all patrolled by the St. Anthony Police Department. The Associated Press reported in July that an analysis of police data showed black people made up nearly half of all arrests made by St. Anthony officers in 2016. Census data shows that just 7 percent of residents in the three cities are black.