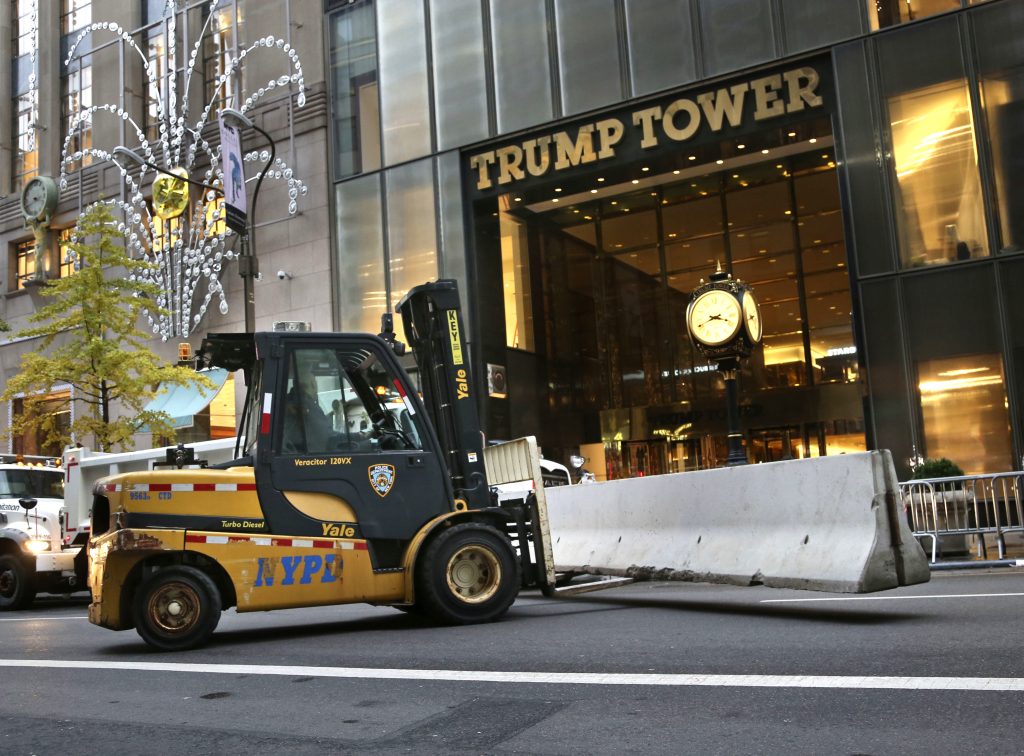 Being a midtown Manhattan neighbor of Donald Trump now that he’s president-elect has come to this: navigating swarms of police officers, barricades, checkpoints and street closings that have turned Trump Tower — a tourist attraction normally open to the public — into a fortress.

The extreme security measures began going up around the landmark Fifth Avenue skyscraper on Election Day, when authorities brought in a fleet of heavy Sanitation Department trucks filled with sand to wall off the front of the glittering, 664-foot glass tower and protect it from a potential car bomb attack.

Those trucks were gone by Friday, replaced by concrete barriers stamped with the NYPD logo. But the stepped-up security — a team effort by the Secret Service, the New York Police Department and Trump’s private security personnel — isn’t going away.

The Secret Service and NYPD wouldn’t detail what lies ahead. That will depend largely on how Trump decides to divide his time between Washington and New York and on an assessment of the vulnerabilities of Trump Tower, where the president-elect lives in a penthouse condo and his Trump Organization is headquartered.

The heightened security has already become a concern for some high-end retailers in one of the city’s busiest shopping districts, especially with the year-end shopping season ramping up.

“We’ve heard a lot from the customers that it has been a real adventure even getting to us,” said Kevin Hill, manager of Crocket and Jones, a shoe store on West 56th Street. “It probably drives people away. I thought, ‘Gosh, if he comes up here every week on the weekends, that will be just a nightmare.’”

Police officers manning metal barricades asked visitors and shoppers where they were going before they could get onto the Trump Tower block Friday. People who said they were headed for the tower or the flagship Tiffany & Co. store next door were being let through, but the jewelry shop canceled the unveiling next week of its annual end-of-year light display.

Metal barricades also restricted access to a Gucci store on the ground floor of Trump Tower.

In the weeks leading up to the election, visitors at Trump Tower were subjected to bag checks and other screening but otherwise had free access to a five-story atrium that has shops and restaurants, including Trump Grill and a Starbucks. Under a zoning deal Trump made with the city in the late 1970s, he is required to keep the atrium open to the public between 8 a.m. and 10 p.m.

Inside the atrium, law enforcement was everywhere, visitors were few and business was slow for the Starbucks and Trump gift shops and restaurants.

Still, “it felt very relaxed,” said tourist Richard Corpening, 61, a Trump supporter from Charleston, S.C. “They didn’t even take my coffee away.”

Police also closed off the block south of the high-rise and set up guard towers on either end. And they have gotten stricter about diverting delivery trucks away from the tower.

The Federal Aviation Administration barred aircraft from flying below 2,999 feet over Trump Tower, saying the airspace restrictions are needed until late January because of “VIP movement.” An organization for private pilots complained that the FAA went too far by limiting access to the Hudson River corridor and its “breathtaking view of the New York City skyline.”

“People think we shut stuff down because we can, but we pay close attention to what happens when we close a street or a sidewalk,” he said. “We look for the best solution.”

The cost of the security measures is unclear, though the city might seek reimbursement from the Homeland Security Department for some of its expenses.

Craig Selimotic Danforth, 47, of Carlsbad, California, appeared startled when he was stopped by police on the way to a meeting at an office building on heavily fortified West 56th Street. Once he was let through, Danforth, who works in the jewelry industry, called the security “a necessary inconvenience.”

“This is Trump,” he said. “It’s different than having to block off a couple streets in Chappaqua for the Clintons.” He added: “Everyone is going to have to adapt to this. You brush it off and go on your way.”