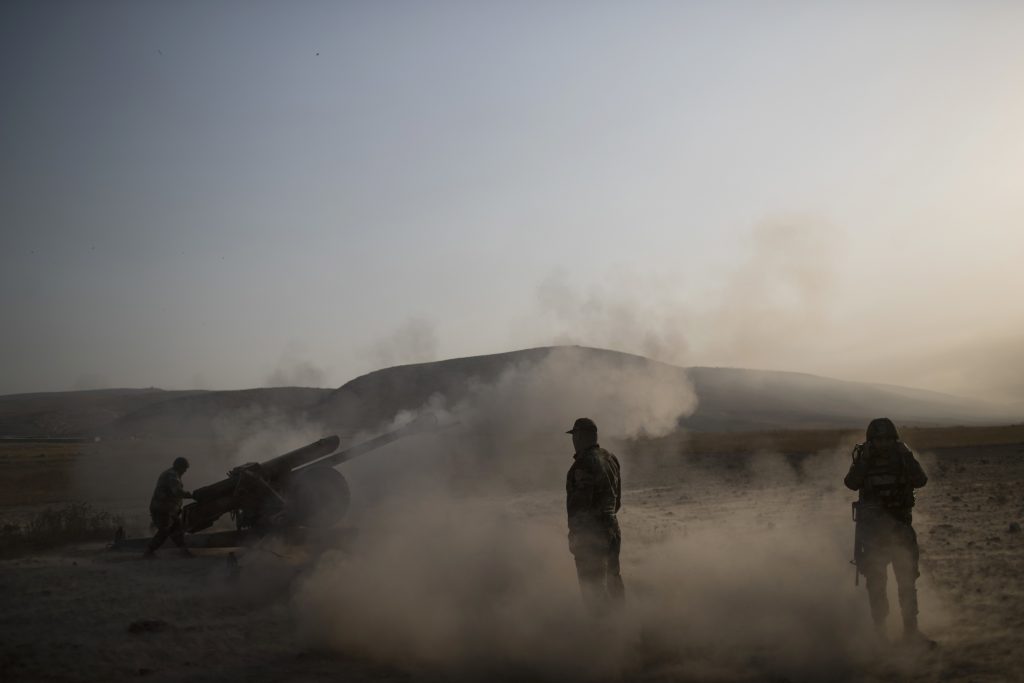 Iraqi investigators were probing a mass grave on Tuesday that was discovered the previous day by troops advancing further into Islamic State-held territory near the city of Mosul, where soldiers have captured a sliver of land but later halted their advance.

The chilling find was the latest instance of mass graves being uncovered on ground wrested from IS terrorists. In Iraq and Syria so far, the group has killed thousands of people in extrajudicial killings, the graves a dark testimony to its brutality.

Associated Press footage from the site shows bones and decomposed bodies among scraps of clothing and plastic bags dug out of the ground by a bulldozer after Iraqi troops noticed the strong smell while advancing into the town of Hamam al-Alil on Monday.

“Investigators flew in this morning and are on their way to the grave to conduct examinations and determine the cause of death,” said Cabinet official Haider Majeed, in charge of mass grave investigations.

The first officials at the site said the grave, behind an earthen embankment near an agricultural college, likely holds about 100 bodies, many of them decapitated. The town lies some 19 miles from Mosul.

It was unclear who the victims were, but a soldier at the site pulled a child’s stuffed animal from the scraps of clothing and rotting flesh, swarming with flies.

IS terrorists have carried out a series of massacres since seizing large swaths of southern and central Iraq in the summer of 2014, often documenting them with photos and videos circulated online.

In Geneva, the U.N. human rights office said it was investigating whether the discovery at Hamam al-Alil was connected to reports about the alleged killing of police officers in the same area.

“We had reports that 50 former Iraqi police officers had been killed in a building outside Mosul city,” spokeswoman Ravina Shamdasani said. “This building was actually the same agricultural facility, agricultural college, that has been cited right now as the site of these mass graves.”

The campaign to drive IS terrorists from Mosul, Iraq’s second-largest city and the extremists’ last major urban stronghold in the country, began on Oct. 17.

Iraqi troops and the Kurdish Peshmerga forces are now converging on Mosul, although the deepest advance into an eastern sliver of the city has stalled after terrorists counterattacked advancing special forces from within built-up, populated areas.

To the northeast, some 8 miles from the city, the Peshmerga forces continued their push on the town of Bashiqa, believed to be largely deserted except for dozens of IS terrorists. Mortar fire, automatic weapons, and explosions rang out through the morning, as a thick plume of smoke hung over parts of the city, obscuring the view of aircraft.

The United Nations says over 34,000 people have been displaced from Mosul, with about three- quarters settled in camps and the rest in host communities.

In a report issued overnight, the U.N. human rights office said the world organization and its humanitarian partners have distributed food, water and medicine to more than 41,000 displaced people and vulnerable residents fleeing the fighting.

Since the battle for Mosul reached the city itself on Nov. 4, some 11,000 people have fled eastward from the city, while some electricity and water supplies have been cut in eastern neighborhoods.

“Parts of the resident population could face shortages of food and water,” OCHA said, also highlighting an urgent need for trauma care due to a lack of facilities.