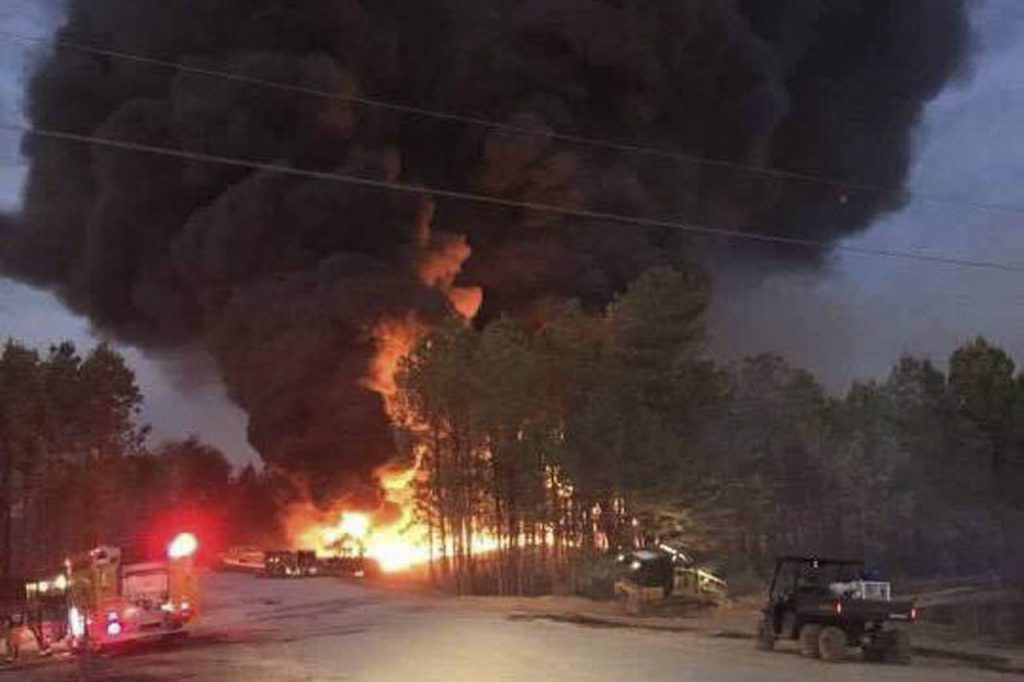 A fatal explosion has shut down a pipeline supplying gasoline to millions of people across the Southeast – the second accident and shutdown in two months – raising the specter of another round of gas shortages and price increases.

It happened when a dirt-moving track hoe struck the pipeline, ignited gasoline and sparked a blast Monday, killing one worker and injuring five others, Georgia-based Colonial Pipeline said. Flames and thick black smoke continued to soar on Tuesday, and firefighters built an earthen berm to contain the burning fuel.

The explosion happened not far from where the Colonial pipeline sprung a leak and spilled 252,000 to 336,000 gallons of gasoline in September. After the leak, the company used one of the Colonial’s two main lines to move gasoline through as it made repairs, but it still led to days of dry pumps and higher gas prices in Alabama, Georgia, Tennessee and the Carolinas while repairs were made.

The Colonial pipeline provides nearly 40 percent of the region’s gasoline and usually runs at or near full capacity. Together the Colonial’s two lines carry more than two million barrels of fuel a day.

By mid-day Tuesday, Colonial Pipeline said it was able to restart the second of its two main lines, which carries diesel fuel and jet fuel. However, the company added that it anticipates that the main gasoline line will be closed the rest of this week.

The severity of the situation will depend on how long the still-closed gasoline pipeline remains closed – whether it’s a few days or a few weeks, AAA spokesman Mark Jenkins said.

Having both lines shut down for an extended period could have been “a worst-case scenario,” said Patrick DeHaan, an analyst with price-tracking service GasBuddy.com.

After the September leak, Colonial said it made up some of the gasoline shortfall by sending gas through the line that usually carries diesel and jet fuel. The company has not said whether it intends to do so again.

“We would encourage drivers not to panic, so don’t run to the gas station and start filling up every gas can you can,” said AAA spokeswoman Tamra Johnson. “We really have to see how this plays out.”

Colonial Pipeline, based in Alpharetta, Georgia, operates 5,599 miles of pipelines, transporting gasoline, jet fuel, home heating oil and other hazardous liquids daily in 13 states and the District of Columbia, according to company filings.

Plagued by a severe drought after weeks without rain, the section of Alabama where the explosion happened has been scarred by multiple wildfires in recent weeks, and crews worked to keep the blaze from spreading.

Coleen Vansant, a spokeswoman with the Alabama Forestry Commission, said crews built a 75-foot-long earthen dam to contain burning fuel. The Shelby County Sheriff’s Office said the blaze had been contained but it was unclear how long the fire may take to burn out.

“We’ll just hope and pray for the best,” Gov. Robert Bentley said in a statement.

Houses around the blast scene were evacuated, and sheriff’s Capt. Jeff Hartley said it wasn’t clear when people might be able to return home.

Eight or nine subcontractors were working on the pipeline when it exploded about three p.m. Monday, sheriff’s Maj. Ken Burchfield told Al.com. The conditions of those hurt weren’t immediately known.

“Colonial’s top priorities are the health and safety of the work crew on site and protection of the public,” the company said in a brief statement.