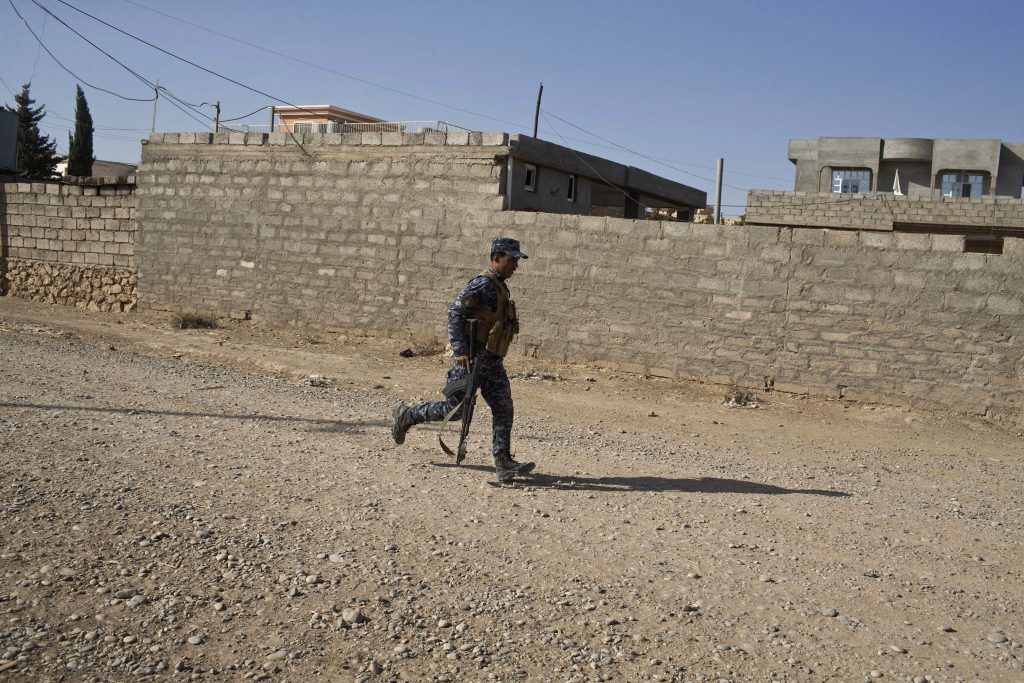 State-sanctioned Shiite militias joined Iraq’s Mosul offensive on Saturday with a pre-dawn assault to the west, where they hope to complete the encirclement of the Islamic State-held city and sever supply lines from neighboring Syria.

Meanwhile, other Iraqi forces aided by U.S.-led airstrikes and heavy artillery drove IS from the town of Shura, south of Mosul, where the terrorists had rounded up civilians to be used as human shields.

The twin thrusts come nearly two weeks into the offensive to retake Iraq’s second largest city, but most of the fighting is still taking place in towns and villages far from its outskirts, and the entire operation is expected to take weeks, if not months.

The involvement of the Iranian-backed Shiite militias has raised concerns that the battle for Mosul, a Sunni-majority city, could aggravate sectarian tensions. Rights groups have accused the militias of abuses against civilians in other Sunni areas retaken from IS, accusations the militia leaders deny.

The umbrella group for the militias, known as the Popular Mobilization Units, says they will not enter Mosul itself and will instead focus on retaking Tal Afar, a town to the west that had a Shiite majority before it fell to IS in 2014.

Ahmed al-Assadi, a spokesman for the group, told reporters in Baghdad that the militias had retaken 10 villages since the start of the pre-dawn operation. But there was likely still some fighting underway, and he said forces were removing explosive booby-traps left by IS to slow their advance.

Jaafar al-Husseini, a spokesman for the Hezbollah Brigades, said his group and the other militias had advanced 4 miles toward Tal Afar and used anti-tank missiles to destroy three suicide car bombs that were heading toward them.

He said the U.S.-led coalition, which is providing airstrikes and ground support to the Iraqi military and Kurdish forces known as the peshmerga, is not playing any role in the Shiite militias’ advance. He said Iranian advisers and Iraqi aircraft were helping them.

Many of the militias were originally formed after the 2003 U.S.-led invasion to battle American forces and Sunni insurgents. They were mobilized again and endorsed by the state when IS swept through northern and central Iraq in 2014.

Iraqi troops approaching Mosul from the south advanced into Shura after a wave of U.S.-led airstrikes and artillery shelling against terrorist positions inside the town. Commanders said most of the IS fighters withdrew earlier this week with civilians, but that U.S. airstrikes had disrupted the forced march, allowing some civilians to escape.

“After all this shelling, I don’t think we will face much resistance,” Iraqi army Maj. Gen. Najim al-Jabouri said as the advance got underway. “This is easy, because there are no civilians left,” he added.

But hours later, a few families who had hunkered down during the fighting emerged. The government has urged people to remain in their homes, fearing a mass exodus from Mosul, which is still home to more than 1 million people.

By the afternoon, Brig. Gen. Firas Bashar said his forces were clearing explosives and searching for IS terrorists in Shura. The sound of artillery still echoed in the distance.

In Baghdad, meanwhile, an IS suicide bomber targeting an aid station for Shiite pilgrims killed at least seven people and wounded more than 20, police and hospital officials said, speaking on condition of anonymity as they were not authorized to brief reporters.

Iraqi forces moving toward the city from several directions have made uneven progress since the offensive began Oct. 17. They are 4 miles from the edge of Mosul on the eastern front, where Iraq’s special forces are leading the charge. But progress has been slower in the south, with Iraqi forces still 20 miles from the city.

The U.N. human rights office said Friday that IS has rounded up tens of thousands of civilians in and around Mosul to use as human shields, and has massacred more than 200 Iraqis in recent days, mainly former members of the security forces.

The terrorists have carried out mass killings of perceived opponents in the past and boasted about them in grisly photos and videos circulated online. The group is now believed to be cracking down on anyone who could rise up against it, focusing on men with military training or past links to the security forces.